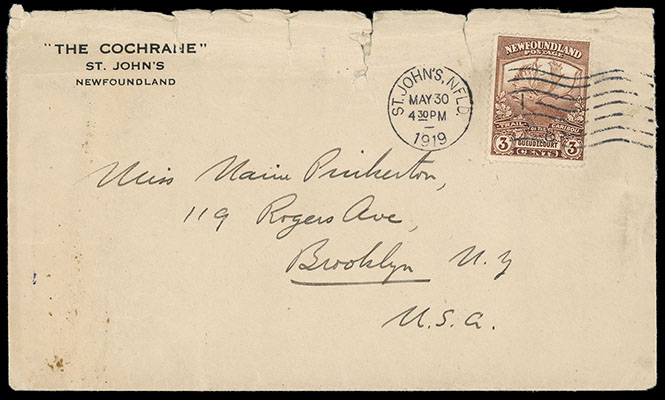 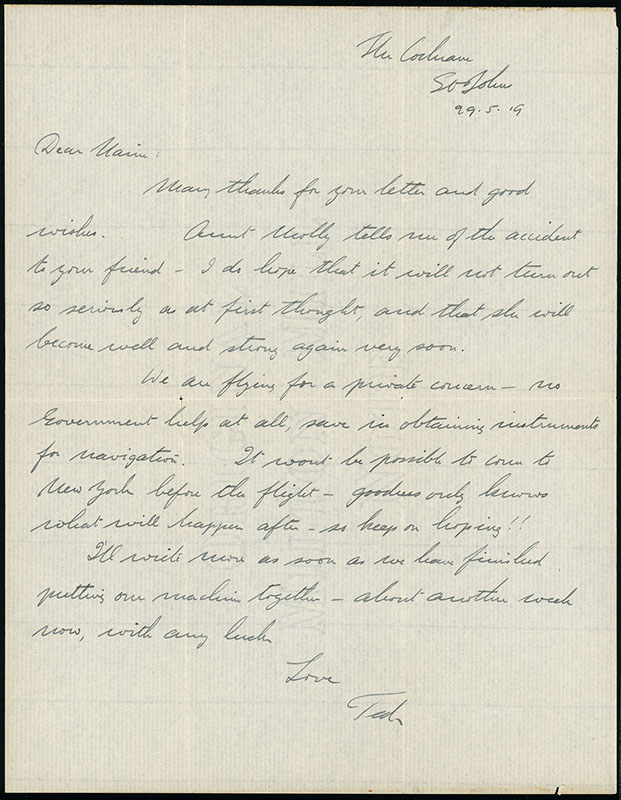 Newfoundland, Airmail, 1919 (May 29) letter from Lt. Brown to family mentioning "Putting our machine together", one page letter with faulty "The Cochrane, St. John's Newfoundland" envelope bearing 3¢ red brown (117) tied by "St. Johns, Nfld. May 30, 1919" machine cancel to Brooklyn N.Y., letter reads "We are flying for a private concern - no government help at all, save in obtaining instruments for navigation. It won't be possible to come to New York before the flight…I'll write more as soon as we have finished putting our machine together - about another week now, with any luck, Love, Ted", Fine and interesting pre-flight letter from Lt. Brown.
Estimate    $300 - 400.

On May 11, a Handley Page plane was unloaded in Newfoundland from aboard the S.S. Digby that had sailed from Great Britain. A second plane, a Vickers-Vimy was unload from the S.S. Glendenon on May 24. Both planes had to be reassembled, the Hanley Page at Harbour Grace and the Vickers-Vimy at St. John's. "Ted" Brown, the navigator of the Vickers-Vimy, was writing to a friend in Brooklyn N.Y. On June 9, both planes had test flights. 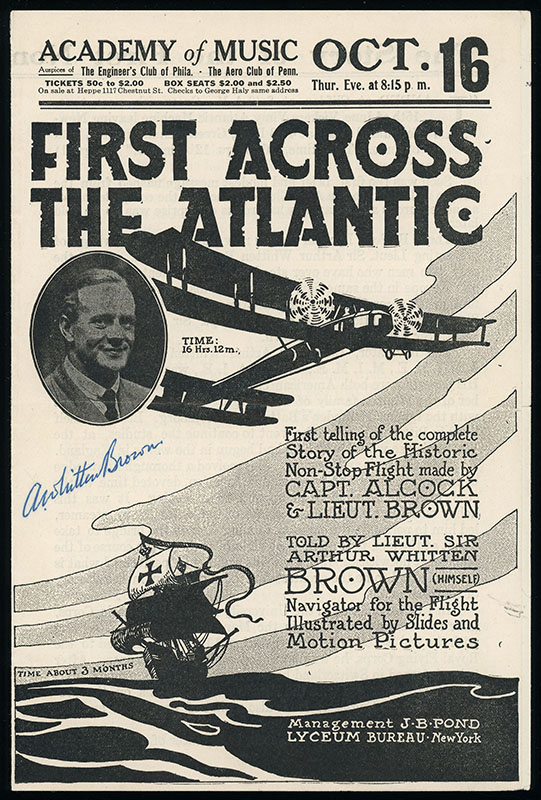 Newfoundland, Airmail, 1919 (Oct.) "First Flight Across the Atlantic" signed "A. Whitten Brown", illustrated program signed by Lt. Brown where he first told of his achievement October 1919 in Philadelphia (he had been educated as an engineer in Pittsburgh), Very Fine, ex-Matejka.
Scott Nos. C2 var.    Estimate $200 - 300. 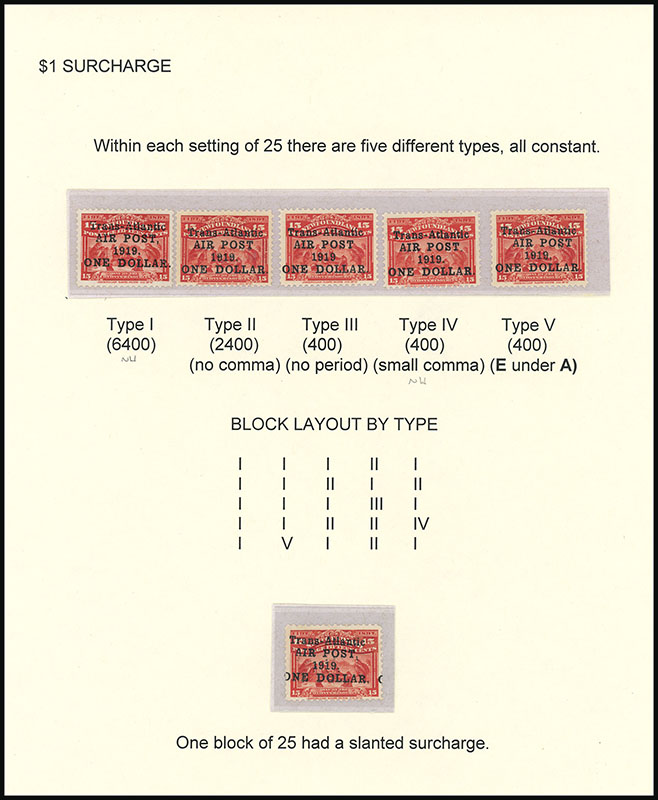 Within each setting of 25, there are five different constant types. Only one block of 25 produced a misplaced slanted surcharge. 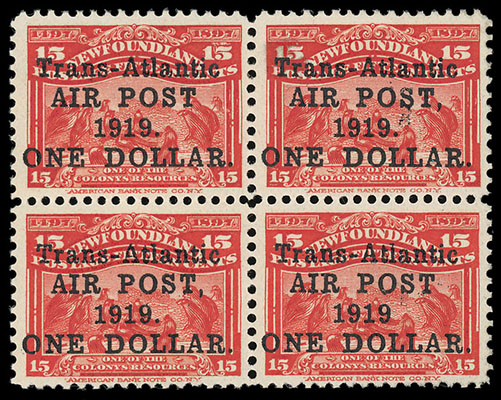 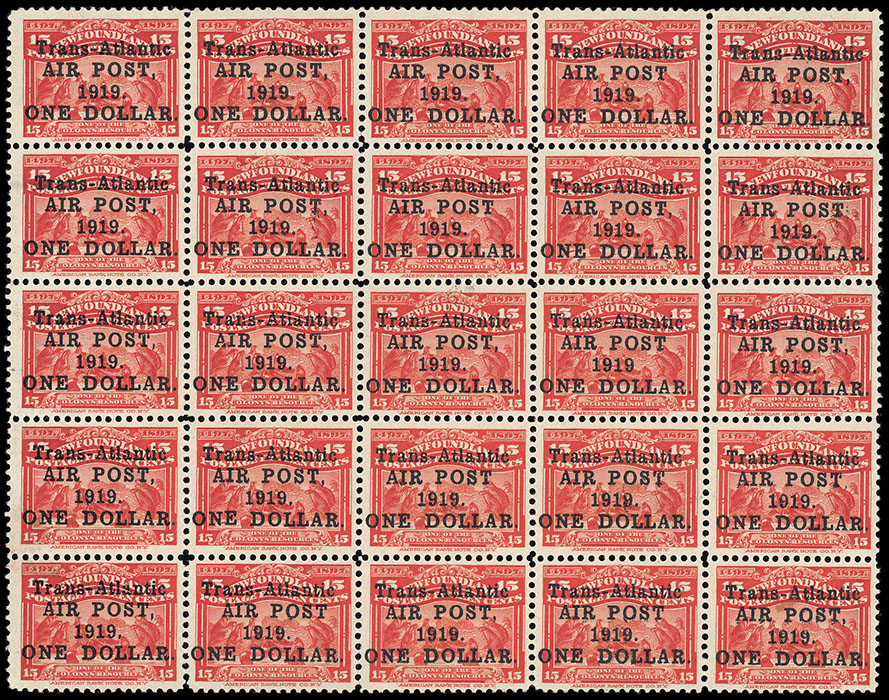 ONE OF ONLY 17 RECORDED COMPLETE SETTINGS OF THE $1 ALCOCK SURCHARGE.

The London Daily Mail offered £10,000 for the first flight across the Atlantic by a heavier-than-air machine. By 1919, conditions were rope for attempts from Newfoundland. In June, 10,000 of the 15¢ Cabot stamp were surcharged $1, in blocks of 25, for conveyance of mail on several planned flights. 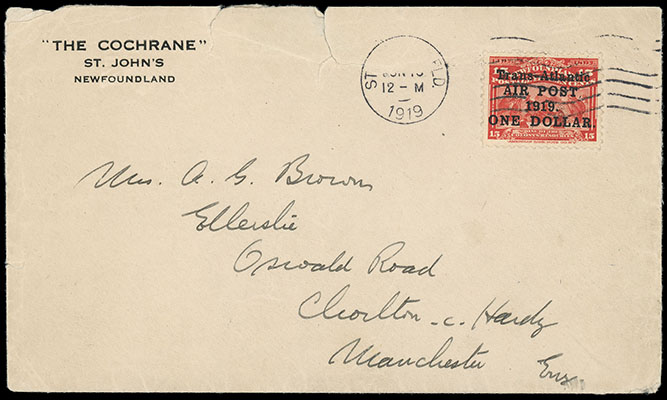 Newfoundland, Airmail, 1919, $1 on 15¢ "Trans-Atlantic", well centered position 20 with small comma after POST, tied by partial "St. Johns, Nfld. Jun 10, 1919" machine cancel on "The Cochrane, St. John's Newfoundland" corner card cover to Manchester, England, original matching letterhead letter from Lt. Brown to his mother reading "St. Johns, June 10th, 1919, Dear Mother, Here is a new stamp for your collection - I hope to see you before you get this letter - as you will no doubt be at Brooklands for the arrival, and then I can tell you all about it. Love Ted"; cover tears, Fine and rare use.
Scott Nos. C2    $1,500+.

A UNIQUE FLIGHT COVER FROM LT. BROWN TO HIS MOTHER IN MANCHESTER, ENGLAND.

This upbeat letter from Lt. Brown to his mother was sent only four days before the flight left Newfoundland. Brooklands was an airfield used by Vickers. Lt. Brown signed his letters "Ted" or "Teddy". 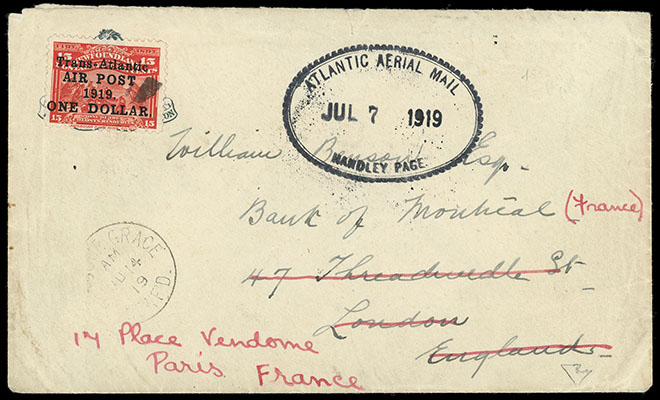 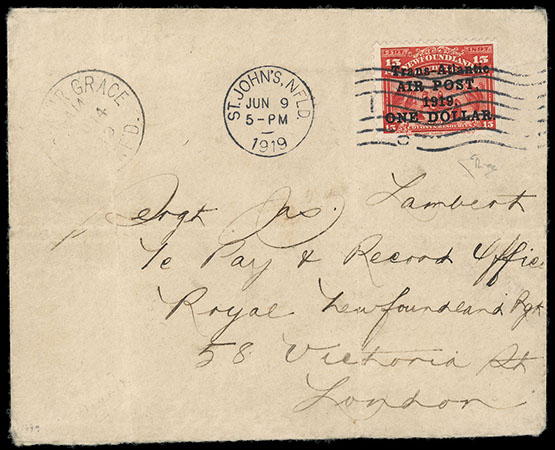 Alcock and Brown had won the prize, but the giant plane was finally ready to go on July 4th, and the crew decided to try for New York out of Harbour Grace. Unfortunately, an oil leak forced them down at Parrsboro, Nova Scotia. After extensive repairs they completed the flight but no mail was carried across the Atlantic on the Mauretania. 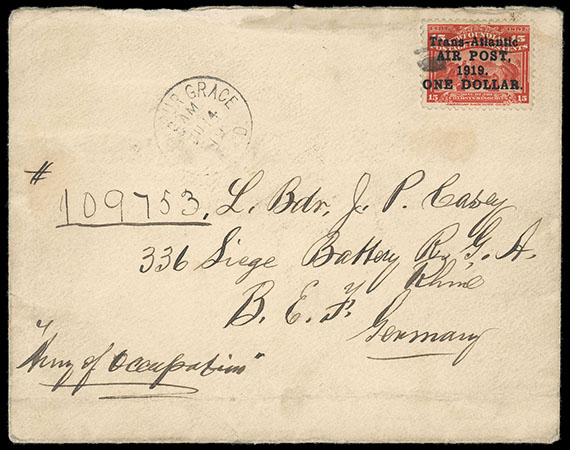 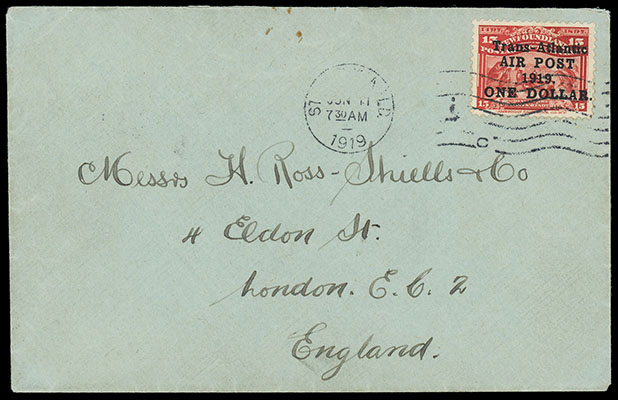 On June 14, 1919, four days after Lt. Brown's letter to his mother, Captain Alcock and Brown took off from St. John's in the Vickers-Vimy. Sixteen hours later they arrived in Clifden, Ireland. They had completed the first non-stop Atlantic crossing by a "heavier-than-air machine", thus winning £10,000 Daily New prize. The $1 stamp franked 196 letters carried.