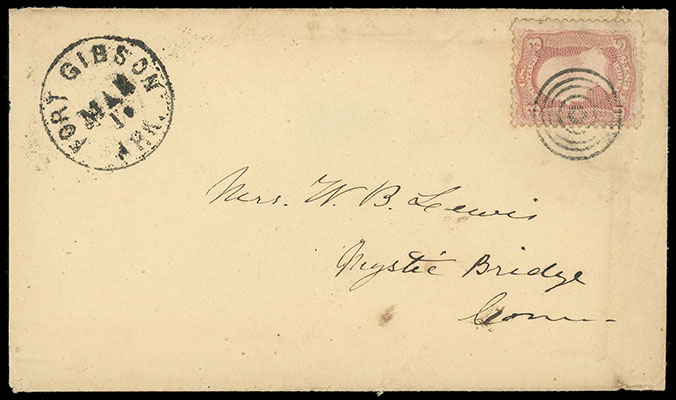 Fort Arbuckle, Arkansas, 1867-68, correspondence group with letters from Fort Arbuckle enclosed in faulty #65 covers with "Fort Gibson, Ark." town cds, note one datelined "Fort Arbuckle C.N., Dec. 22" 1867" talking about hunting and "…I should not be surprised if I leave the service soon as there is very little money out here & expenses are enormous…Our Mail has been robbed several times lately…We are thinking of taking another big bear hunt…A Texan was shot here day before yesterday…"; "Ft Arbuckle Feb 24/68" reading "…I am going out on an expedition…I am going to the Wichita Mountains, the … tribes + also the Comanches…I suppose we shall make quite a trip into New Mexico…I can hunt Buffalo on him better…; etc., covers mostly faulty but some interesting content.
Estimate    $400 - 600. 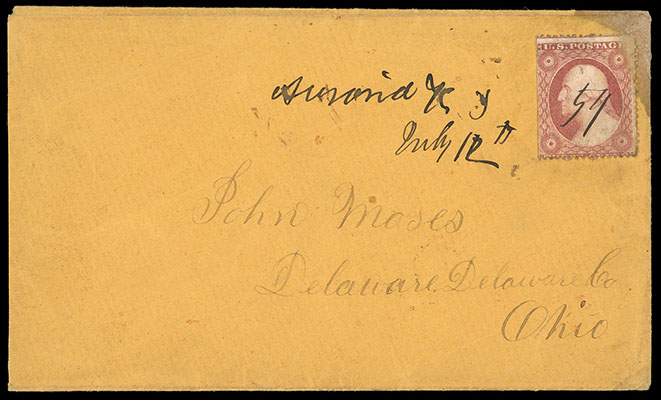 ONE OF ONLY 5 RECORDED AURARIA, KANSAS TERRITORY MANUSCRIPT POSTMARK USES.

On October 3, 1858, a group of prospectors arrived from Georgia led by. Green Russell. They soon established the town site of Auraria located on the south bank of Cherry Creek. Henry Allen surveyed the Auraria town site and was elected the first president. Just one month later a group arrived from Kansas led by William Larimer established Denver City located on higher ground above the river, and became the trading center of the area later merging with Auraria. 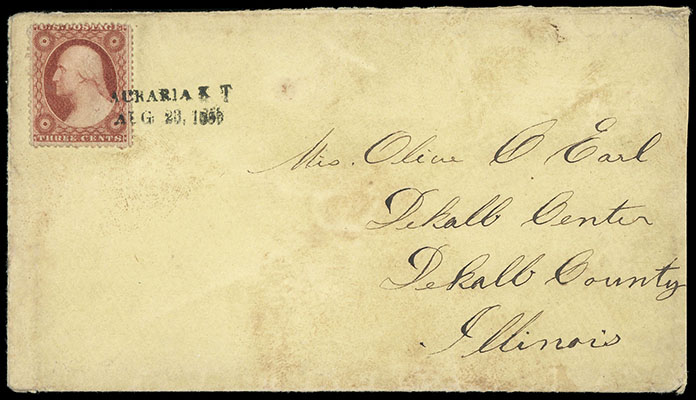 Auraria K.T., Aug 23, 1859, two-line postmark ties 3¢ dull red (26) on yellow cover to Dekalb Center, Ill., accompanied by original letter with page one missing, Mr. S. N. Earl writes to his wife how life is on the frontier near the Gold Fields "I have been to Golden City there is about one thousand inhabatants, both places have some very good Buildings Denver has rather the best building of the three places althou I think Auraria will make the larger place of the three. We are now on our way to the headwaters of Cherry Creek to look up a location for winter…"; some edge wear and reduced slightly at right, Very Fine, ex-Risvold, Walske.
Estimate    $5,000 - 7,500.

A CHOICE EXAMPLE OF THE AURARIA, KANSAS TERRITORY TWO-LINE POSTMARK.

The Auraria post office was established on January 18, 1859 but the first contract mails were not carried until June 18, 1859. The United States Express Company carried the eastbound mail, however, the company failed after a short time discontinuing service on August 26, 1859. 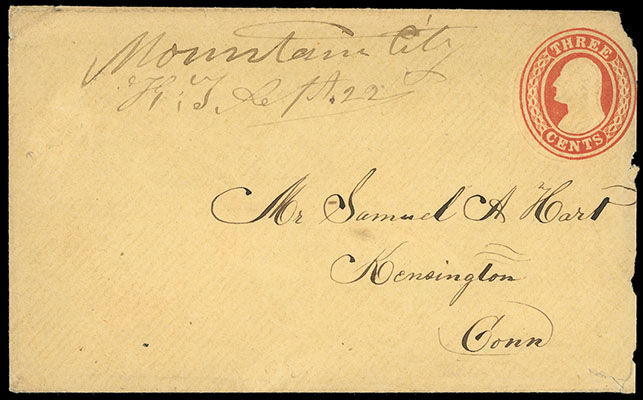 Mountain City in Gilpin County was one of the richest mining discoveries on the site known as "Gregory Diggings". The Post Office opened on January 17, 1860 while in the Kansas Territory. The office handled thousands of letters, and in October 1869 name changed to Central City. 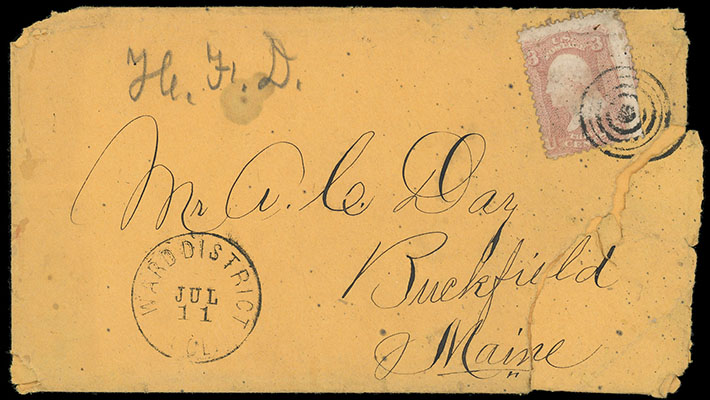 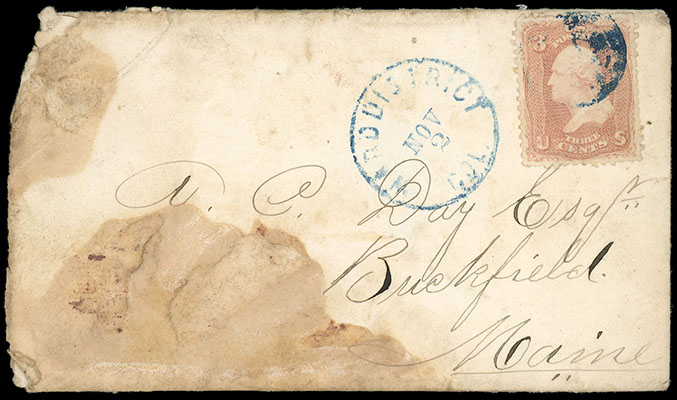 Ward District, Col., cds on four 1867 covers from correspondence to Buckfield, Me., two with discernible town strikes in black and blue (other two in black and blue barely to not discernible), each with original enclosure with datelines from "Columbia City" or "Columbia City Ward District", some interesting content from traveler visiting Utah, New Mexico, Lower California and finally Colorado looking for the "Gold Diggings", interesting content regarding Indians including The Indians…Robed several Coaches and Destroyed the Mail and Well speaking of the Indians being mixed up with the Gold they made us think so at the head of the little Colorado River. They gave us a hearty welcome…We got out of the way though by killing fifteen Indians and getting on man wounded., also includes two covers from Black Hawk Point and one from South Boulder from earlier correspondence (all with enclosures); cover flaws including opening tears and staining, Fine, still a very rare townmark with only two or three recorded in black and none in blue.
Scott Nos. 65    Estimate $300 - 400. 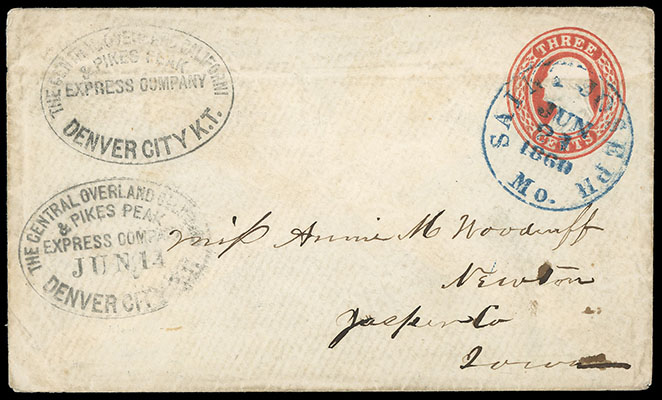 The Central Overland California & Pikes Peak Express owned by Russell, Majors and Waddell developed the largest freighting company in the west. The discovery of gold in the Pikes Peak Region helped to expand their freighting business over the Platte River route from their headquarters at Leavenworth city, Kansas and saint Joseph, Missouri to Denver City. 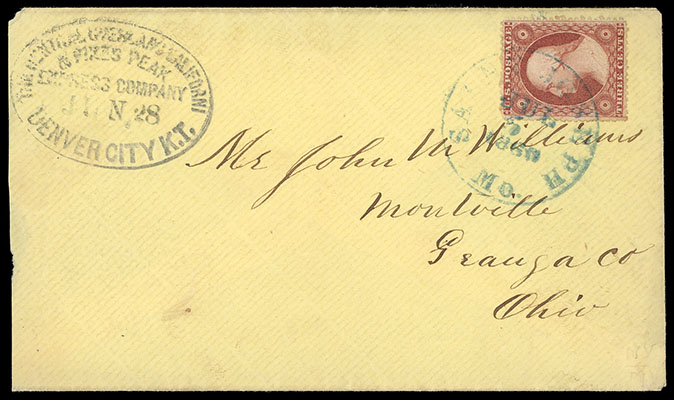 This entire was sent outside the mails from Denver to St. Joseph via the Central Overland Route (Denver-Julesburg-Fort Kearney) on a COC&PP coach. From there it entered the mails to New York. 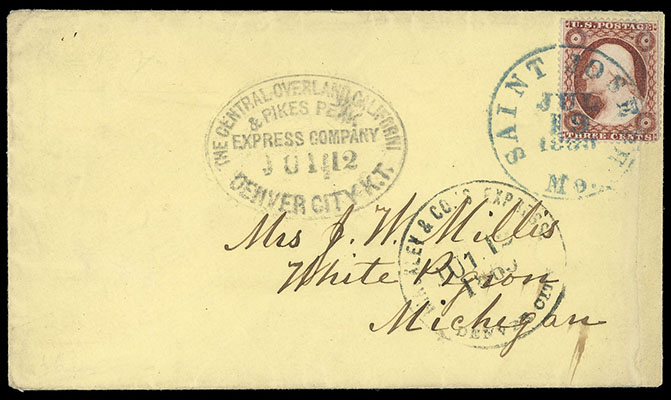 Cover was carried by COC & PP Express to Denver and turned over to Hinckley who carried to St. Joseph. 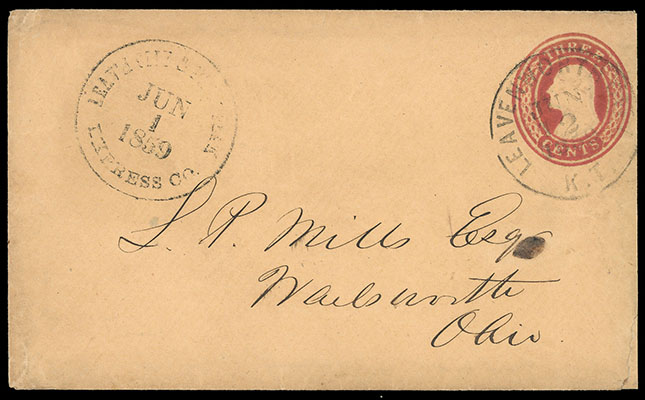 The Leavenworth City & Pikes Peak Express Co. was formed in February of 1850 by William Russell and John Jones. This was the first express service between Denver City and Leavenworth City, initially charging 25¢ per letter. This marking is known used only from April to July, 1859 as Amos Streck arrived at Denver City on July 19, 1859 with the "Jones & Russells Pike's Peak Express Company" date stamp that saw use thereafter. 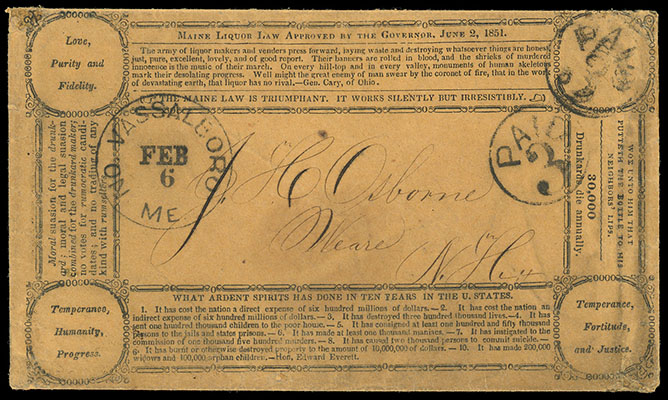