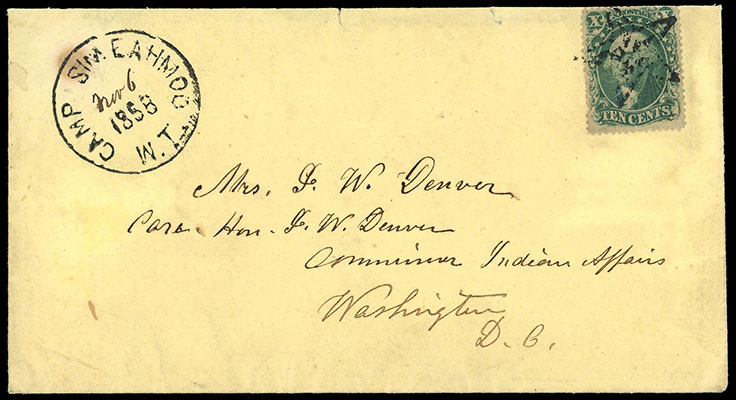 THE EARLIEST DATED CAMP SIMEAHMOO USE OF ONLY FOUR RECORDED.

This cover was sent by August V. Kautz to his cousin, who was the wife of General James W. Denver. Kautz had emigrated from Germany to Ohio and was graduated from West Point in the class of 1848. At the time of this letter he was a Lieutenant. During the Civil War he rose to Brigadier General and then to Major General in 1864-65. He was a member of the military commission that tried the conspirators for the assassination of President Lincoln.

Camp Semiahmoo was founded by the Boundary Commission in 1858 as a base of operation for the northwest boundary commission survey on Canadian soil, among the remnants of the earlier British camp, on a little strip of open land near the mouth of the little Campbell River close to one of the Semiahmoo winter camps. The site was just north of the forty-ninth parallel; contained a fresh water supply, and the Campbell River channel provided water access over the tidal flats. While at this site the troops constructed about a mile and three-quarters of good road along the shore of Semiahmoo Bay between the boundary and Camp Semiahmoo. This base was later used while the boundary was slashed and marked from Semiahmoo Bay to the Sumas Flats. 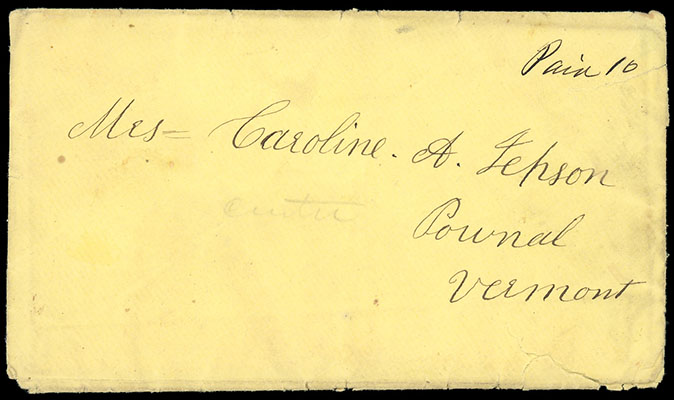 The Washington Territorial Postmark catalog records a Colville Valley post office 1858-59 (no postmarks known) and Colville from 1883 to current. 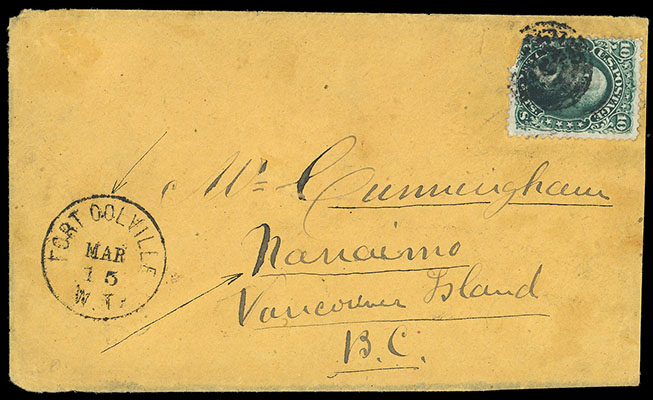 The Fort Colville Post Office was established in 1858 as a base of operation for the northwest boundary commission survey. 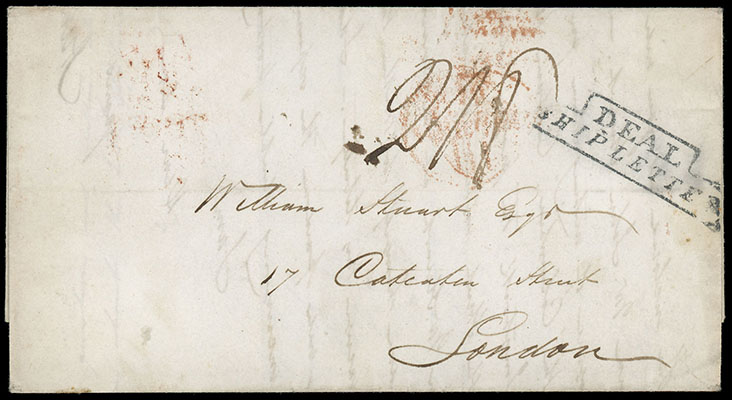 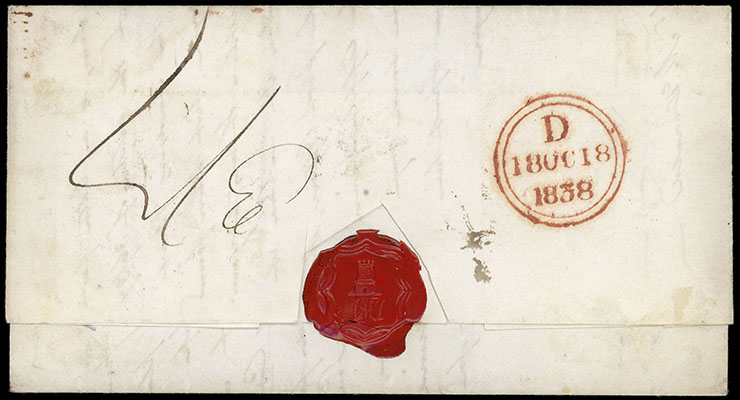 The autographed signed letter from Archibald McDonald (1790-1853) was Chief Trader for the Hudson's Bay Company at Fort Langley, Fort Nisqually and Fort Colville and one-time deputy governor of the Red River Colony. Letter concerns an earlier letter written from Fort Colville about 25 September 1836 to John Stuart per Hudson Bar Co. "Columbia" by Captain Royal that was miss-addressed. 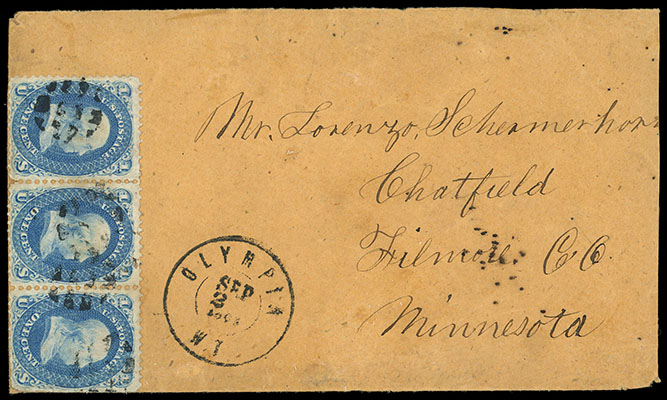 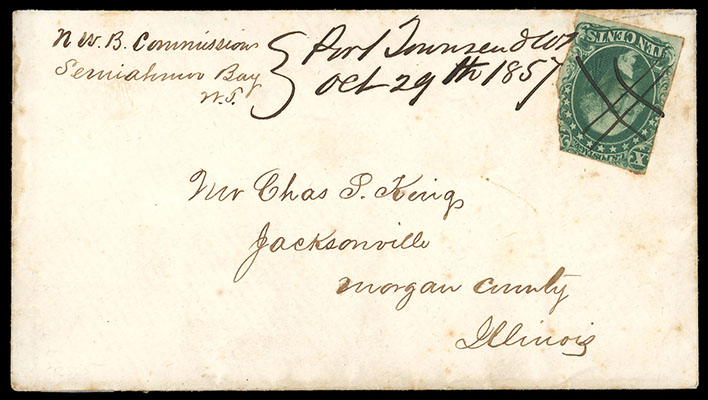 Port Townsend was established on Sept. 28, 1852 in Oregon Territory. Although "Fifty-four forty or fight" was the slogan, the line was drawn at 49 degrees in 1846. However, it was not until the summer of 1857 when a joint American/British boundary commission began to survey the 409-mile line. It took four years, 1857-1861, to survey the entire 409-mile boundary, which crossed rugged and heavily forested terrain between the crest of the Rocky Mountains and the Pacific coast at Point Roberts. 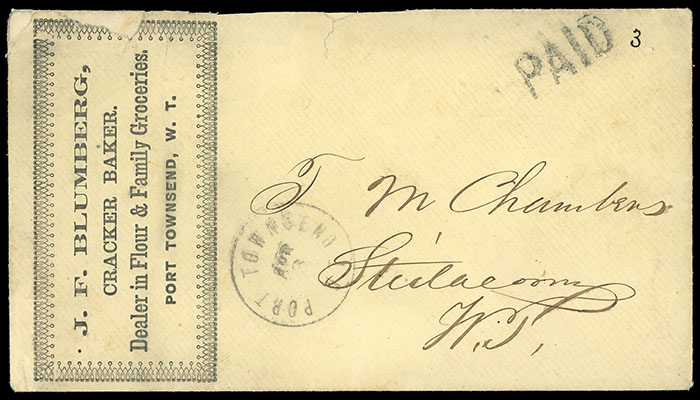 Port Townsend post office opened in 1852, months before the establishment of the territory. However, the earliest date known was 1857. 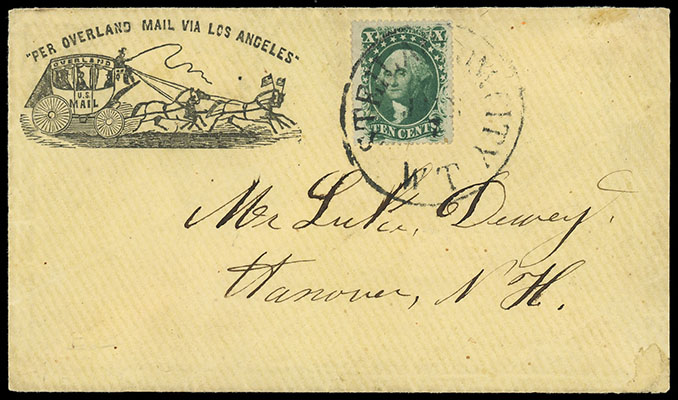 ONE OF ONLY TWO RECORDED BUTTERFIELD USES ORIGINATING FROM WASHINGTON TERRITORY.

The first U.S. overland mail contract connecting San Francisco to the Mississippi River cities was made with the Overland Mail Company as contractor. The "Southern" route name quickly became synonymous with the Company president, John Butterfield. This was a biweekly service (later more frequently between Los Angeles and San Francisco) in operation from September 16, 1858 through March 1861, when because of the impending Civil War, Congress determined to move the overland mail route north to the Central Overland Route. 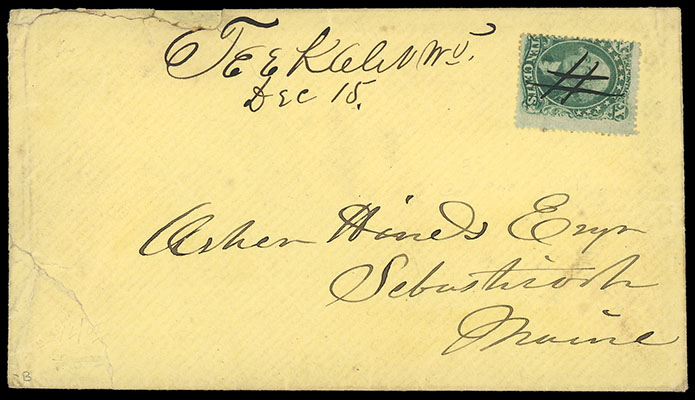 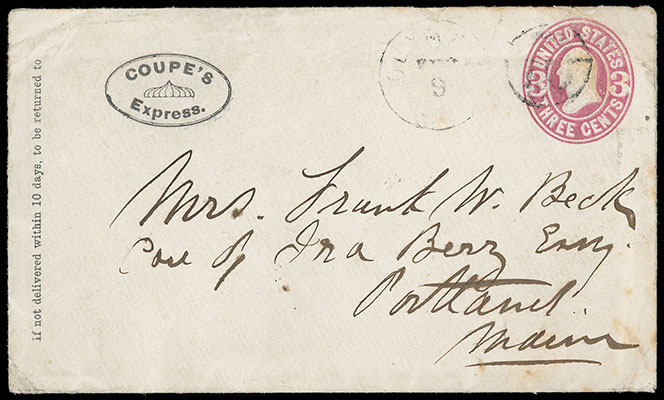 A GREAT WASHINGTON TERRITORIAL EXPRESS RARITY. THIS IS THE EARLIEST OF ONLY TWO RECORDED EXAMPLES OF THE COUPE'S EXPRESS FRANK.

This one-man express was operated by Thomas Coupe in the Puget Sound area reportedly from 1864 for almost ten years. Coupe operated a small steamer vessel, the "Success", as a ferry between Port Townsend and Ebey's Landing on Whibey Island during the life of his express. A cover carried by Wells, Fargo & Co. from San Francisco to Port Townsend via Victoria is known bearing an endorsement "In Care of Capt Coupe".