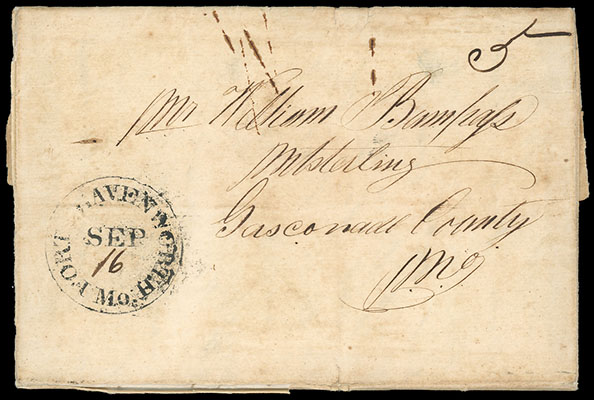 This letter refers to Bents Fort during Pre-Colorado Territory, which was a celebrated fur trading post built in 1848 by four Bents Brothers. Kit Carson was employed there as a hunter from 1831 to 1842 when he left to join the Fremont Expedition. The post was a real Fort with walls 15 feet high and 4 feet thick. 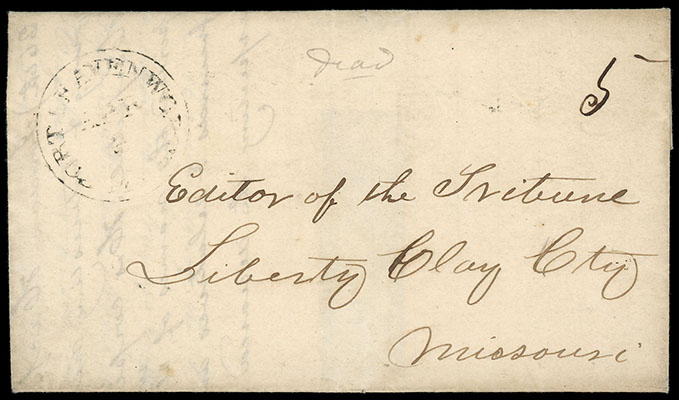 (Mexican War Trail Letter - Doniphan's Expedition) Fort Leavenworth Mo. Apr 2, cds and manuscript "5" rating on 1847 folded letter from Captain John T. Hughes, Company "C", 1st Regiment Missouri Mounted Vols. to the Editor of the Tribune, Liberty Clay City, Mo., cover with Autograph Note by John T. Hughes, who writes: "John Browning, of the Howard company (i.e., Howard County, MO; Hughes's regiment was the 1st Missouri Mounted Volunteers) was taken ill while upon the Navajo Expedition, was brought into Socorra upon the Del…was finally removed to Albuquerque for medical aid & there died some time in December (1846). Today (Tuesday 26th) Jordan Hackley of the Howard Company, a young & interesting man, died of Typhoid Fever…His corpse will be interned tomorrow. I have reported the names of all the men who have died in the regiment because friends & relatives are anxious to hear every particular respecting the deceased.", Very Fine, ex-Risvold.
Estimate    $750 - 1,000.

Doniphan's men traveled from Ft. Leavenworth down the Santa Fe Trail to invade Mexican territory during the Mexican-American War. Captain John T. Hughes wrote the historic Book "Doniphan's Expedition; Containing an Account of the Conquest of New Mexico" published in 1848 that contains Doniphan and Price portraits at front and with fold-out map. 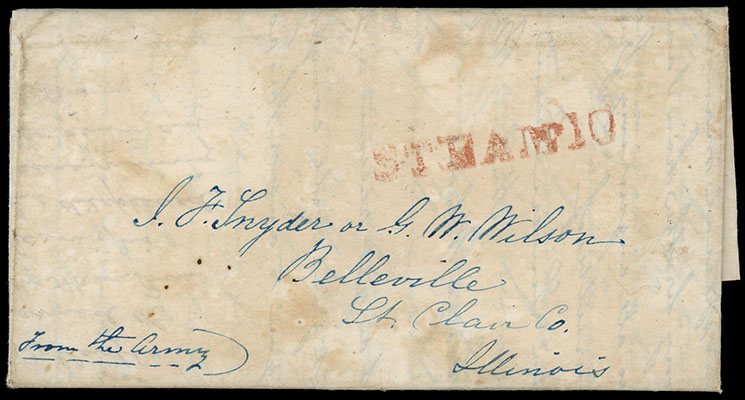 (Mexican War Trail Letter) "Cold Spring, Texas Territory, August 27, 1847", dateline on folded letter from Private Huling Major of Company "E", 1st Regiment Infantry Illinois Vols. to Belleville Ill., endorsed "From the Army" bottom left, carried by military express to the Missouri River where it was placed on board a steamboat bound for St. Louis, entered the mails in St. Louis with red "STEAM 10" straightline for 10¢ postage due, letter reads, "The opportunity I am embracing myself of is that of Four Companies of Mo. Volunteer Cavalry being the last of Col. Price's Regiment the Colonel himself accompanying it looking jovial and hearty in fact his whole appearance calculated well to influence strangers in his favor and bearing indications of a noble and generous spirit and one that would be kind considerate and indulgent to his men or those at all palaces under his command…we shall make an early start in the morning travel further and finally without doubt be the first company of the Illinois Regiment in Santa Fee…"; some light soiling, F.-V.F. and scarce Mexican War Trail Letter from Texas.
Estimate    $1,000 - 1,500.

An additional note added to the letter by J.F. Snyder reads, "Huling Majors returned from the war and married the "Adorable" daughter of Mr Aaron Prims. Then he went to California leaving his wife with her parents, and there seems to have disappeared perhaps died in some obscure mining camp. He was a fine house carpenter and good hearted clever fellow. We shall miss him." .