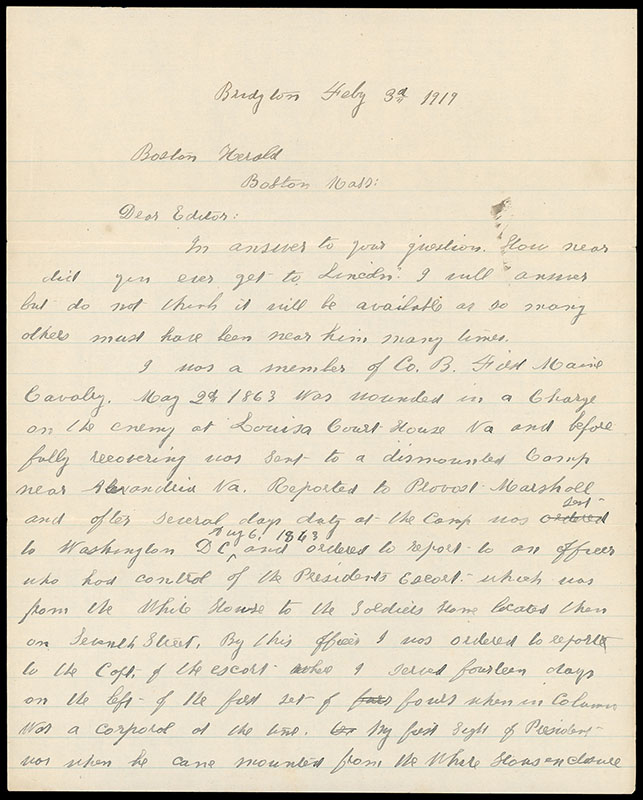 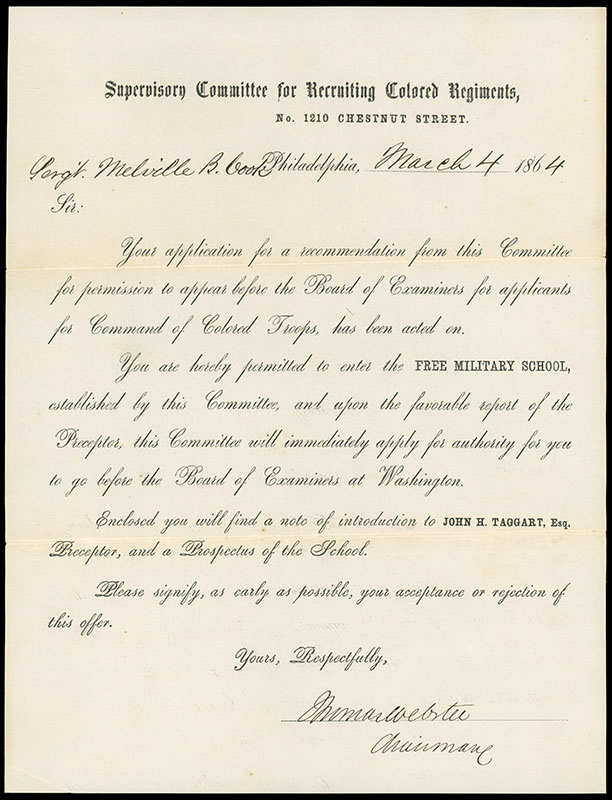 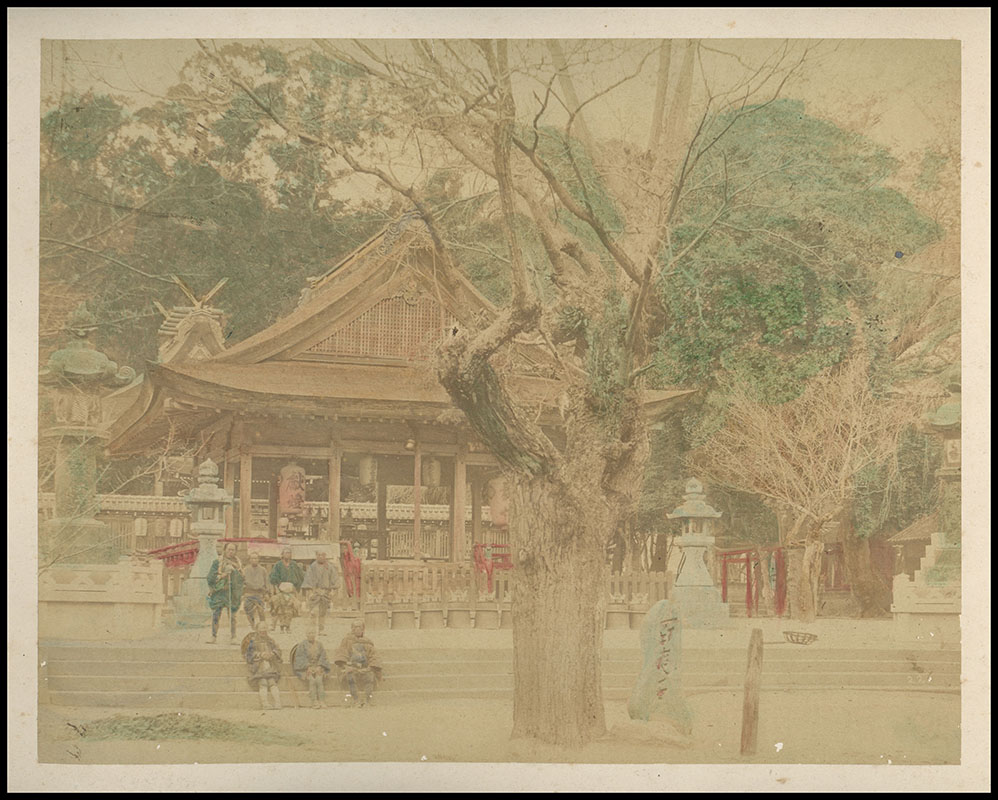 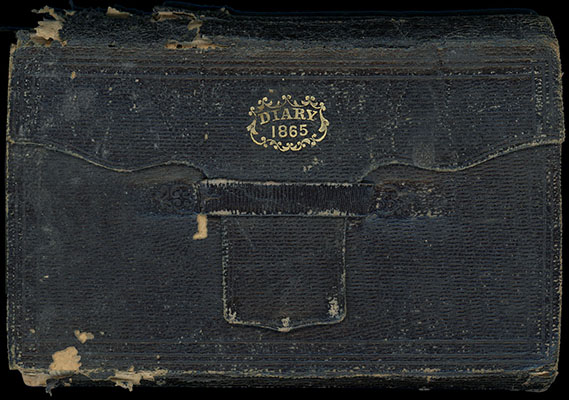 Captain Melville B. Cook: A Collection from his Civil War Service, Sailing Career and Beyond 1861-65, 1869-1900, This collection of diaries, letters, documents, books, photographs, and artifacts reveals the life of a gifted writer and adventurer from a pivotal time in the history of our nation: one of deep division, heroic bravery, poetic romance, raw adventure, and dedication to country and the preservation of community. Melville Bradford Cook, a descendent of Governor William Bradford, was born 30 November 1838 in Friendship, Maine, and educated at Bucksport Seminary. He taught briefly in town schools at age 16, but by the next year, the love of the sea drew him to begin a sailing career on his father's schooner, a career he would later pursue in earnest after the Civil War.

The first from his hometown to enlist, he joined the U.S. Army on 26 September 1861, and was mustered out 1 August 1865. Assigned to Company B of the First Maine Cavalry Cook participated in 35 of the 44 engagements, his service leadership earning him an advancement to first sergeant. He was wounded three times, and during one period of recovery, was transferred to Washington, D.C., where he served 2 weeks on Lincoln's mounted escort from the "White House to the Soldier's Home, located then on Seventh Street", described in a letter to the Boston Herald in 1919. Being a prolific writer bound to detail, Cook's four diaries (dating 1862, 1863, 1864, and 1865) and voluminous letters to his dear "Annie" take the reader beyond the harsh details of war to include the small events which make up our lives and filled the moments of a dedicated soldier.

The collection pertaining to the Civil War includes:
Leather bound diaries of 1862, 1863, 1864, and 1865, each containing over 300 entries, including detailed
descriptions of engagements, a soldier's daily life, and statistical information
More than fifty letters to his sweetheart, Annie, most of which are in the original, stamped envelopes
A 319-page typewritten document of Cook's diary entries and letters, compiled by his great granddaughter,
Barbara N. Turner, For the Love of Annie.
First Edition Civil War books including: Maine at Gettysburg (1898), First Maine Cavalry by Tobie (1887), First Maine Cavalry Campaign 2 (1883-1892), First Maine Cavalry Campaign 3 (1893)

Cook returned to sailing after the war, captaining several vessels which would take him around the world from
the fall of 1865 to 1890. After extensive experience in the coastal trades along the eastern coast, South America, Mexico, the Canary lslands, and Spain, Cook began trading in case oil, which took him to Japan, Liverpool, and San Francisco. Cook's wife, Annie, and their daughter Grace accompanied him on a couple of his voyages, most notably, one to Yokohama and Kobe. After leaving the sea, Cook did not retire from productivity. He wrote a small book on Japan entitled Japan: A Sailors Visit to the lsland Empire and transcribed the early records of Meguncook Plantation and Friendship, Maine. He was appointed the local postmaster, county treasurer, county commissioner, and Justice of the Peace over a period of years. 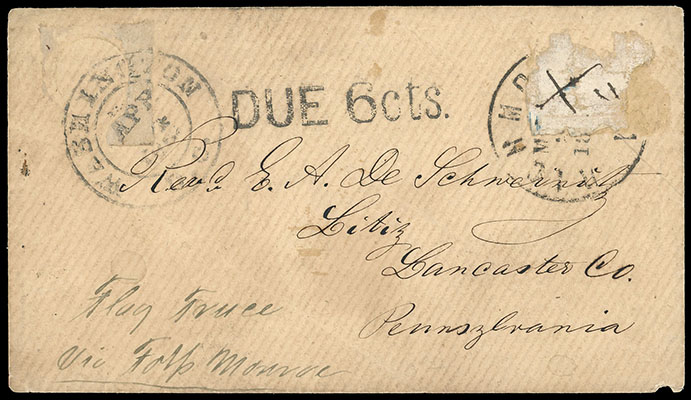 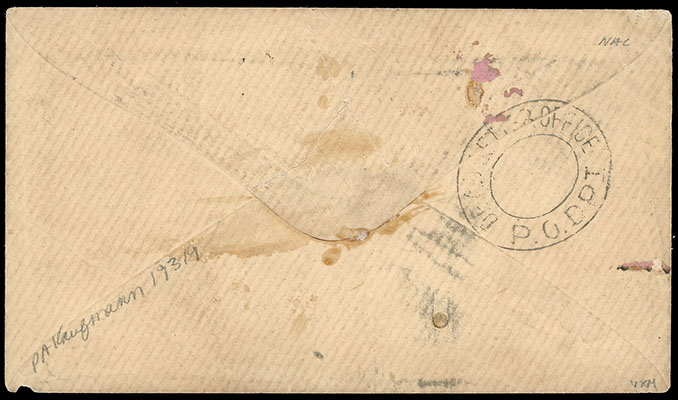 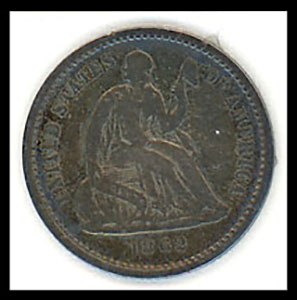 Confederacy, "Dead Letter Office, P.O. Dpt.", dateless double-oval backstamp struck on flap of 1863 cover from Richmond Va. to Revd E.A. De Schweinitz, Litiz, Lancaster Co. Pa. endorsed "Flag Truce Via Forts Monroe" at bottom left and with 10¢ blue, frameline (10) affixed to pay the Confederate postage tied by Richmond "Mar." cds and properly peeled off at the exchange point, the sender attempted to pay the U.S. postage by affixing a half-dime at the top left, the imprint of which is clearly visible (a replacement coin accompanies), none of this was accepted by the postal authorities and the cover was sent to the Dead Letter Office. "Washington D.C., Apr" double-circle datestamp struck upon release along with bold "DUE 6cts." rating handstamp for unpaid postage; minor soiling and edge nick., Very Fine and fascinating attempted through-the-lines use.
C.S.A. Catalog No. UDL-01; $2,500    Estimate $1,000 - 1,500.

This attempted Flag-Of-Truce use with manuscript directive was sent during the September 1862 - July 1863 period when flag-of-truce mail was suspended (see Walske-Trepel Special Routes book, Chapter 5).

Edmund Alexander de Schweinitz (1825-1887): In 1856, Edmund was consecrated as a presbyter by Bishop Peter Wolle. In 1861, Edmund and family moved to Lititz, Pa., where Edmund worked as a pastor from 1861-1864 and established the weekly journal of his church and served as editor of The Moravian, 1861-1867. He was an American bishop of the Moravian Church. His papers are housed at Lehigh University. 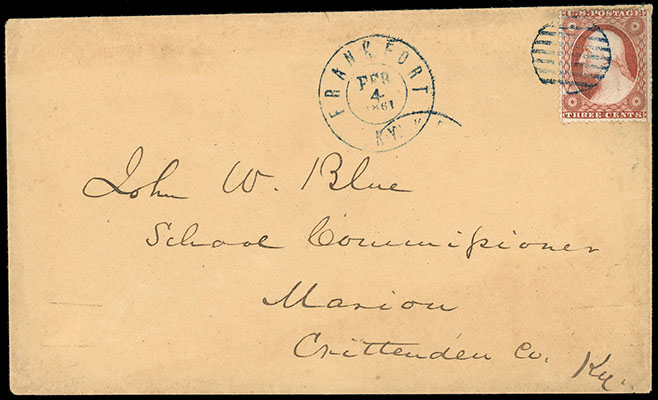 Kentucky was torn between her loyalty to her sister slave states and the national Union. They initially tried to remain neutral, but it was much more complicated in practice than in principle. Kentucky's dual governments and military forces caused many divisions between Kentucky families. It was the definition of a war of brother against brother. As a border state, Kentucky had economic ties to both sides. John William Blue, Sr. (1828-1878) was a prominent lawyer, a graduate of Princeton, and served in the State Legislature. His son, of the same name (1861-1934), was also a lawyer, in politics and served as mayor of Marion.

Southern sympathizers from a rival government in Kentucky seceded on November 20, 1861; this faction was admitted into the Confederate States on December 10, 1861. 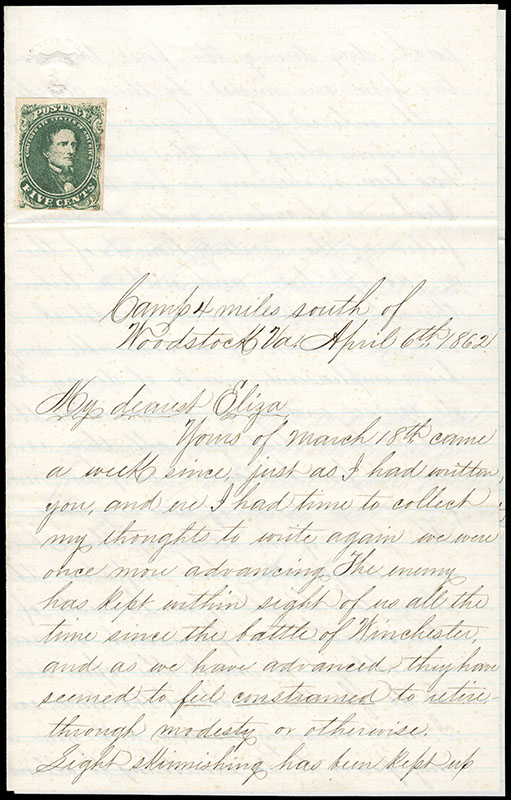 Confederacy, (Military Addresses) "Camp 4 Miles South of Woodstock Va. April 6th 1862", dateline on war content letter with unused CSA 5¢ green (1) affixed at top left, interesting content reads in part "… The enemy has kept within sight of us all the time since the battle of Winchester, and as we have advanced they have seemed to feel constrained to retire through modesty or otherwise. Light skirmishing has been kept up each day during the past two weeks now and then killing a man or two from our midst by their careless shells and we returning the compliment with interest. Our progress is necessarily slow on account of keeping enough provisions along for the sustenance of the troops, and at the same time it has been necessary so far to move slow in order to give time for the accomplishment of certain ends elsewhere. We are now seventy miles from the Potomac following the westerly branch of the Shenandoah, which at this point makes an abrupt turn and with a tributary now forms the dividing line between the Rebel and our forces. Woodstock is the county seat of Shenandoah county and is a town of considerable importance but like most Virginia towns, it bears unpleasant marks of decay. Here the Manassas Gap R. R. follows on in its course, ending a few miles to the south of us. It is of no use to us for the Rebels have destroyed all they could of it in their retreat, by burning several fine bridges. It is of not much loss to us for it does not extend far enough to be of use very long…This part of the valley of the Shenandoah is rich in agriculture but as a large army has infested this region so long, it has been worse than the blight of locusts of old…I send you a specimen of C. S. Postage stamps which is a fair sample in point of execution of the most of their handiwork unaided by the "cursed Yankees."…" with mailing directions of "Co. "A" 39th Regt. Ill. Vol. 2nd Brigade, Shields Division, Washington, D. C.", accompanied by original mailing envelope addressed to Susquehanna Depot Pa. with stamp cut off and partial Banks Division cds, Extremely Fine.
Estimate    $500 - 750. 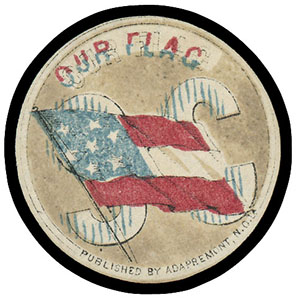 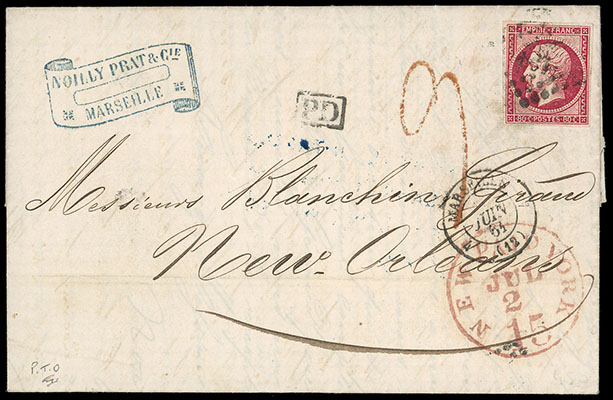 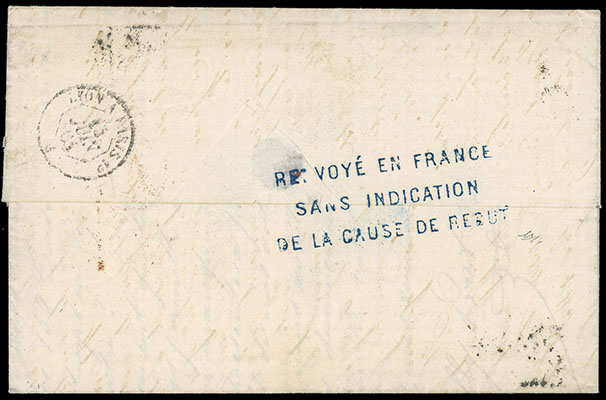 By the time this cover from France reached New York, the mail routes between North and South had been suspended and mail from foreign countries was returned. This is the French equivalent of the British three-line "Sent Back to England" handstamp which was applied on covers returned from the South, however this is the only known example of this French marking. 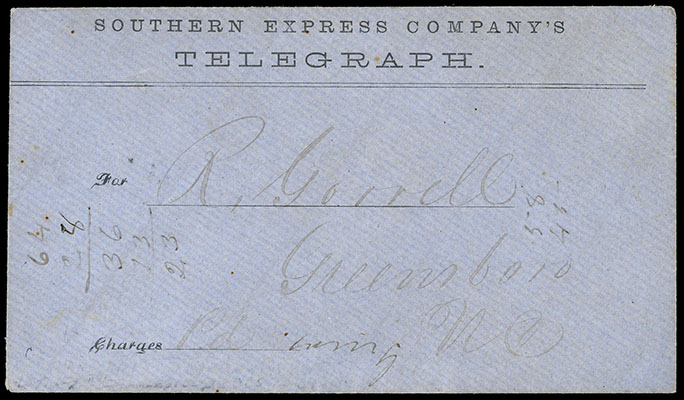 The Adams Express was reorganized as the Southern Express Company at the onset of the war, this usage dates from early in the war.