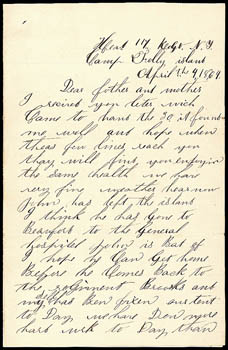 Confederacy, 117th New York Infantry Soldier Letter. Datelined "Head. 117 Regt. N.Y., Camp Folly Island, April the 4th, 1864" and reads, "I received your letter which came to hand the 30. It found me well and hope when these few lines reach you they will find you enjoying the same health. We have very fine weather here now. John has left the island. I think he has gone to Beaufort to the General Hospital. John is bad off. I hope he can get home before he comes back to the regiment. Brooks and myself have been fixing our tent today. We have done more hard work today than we have done before in two months. I feel as if I have been sawing lumber out at Anderson's new mill all day. I think that the Rebs are trying to kick up a muss tonight. They are shelling our men that is on Black Island, but when they get through then our turn comes. Perhaps they don't think about that just now. Charles Gifford ain't come yet. We expect a lot of new recruits on the next mail boat. I hope they will come before long for the sooner we get them broken in the sooner we will have it easier. I would like to see Alf Barker just for fun to hear what he has to say about the war. I can't think of any more to write so no more this time." written by Charles Hevener, Very Fine.
Estimate    $75 - 100.

The 117th New York Infantry, was recruited in Oneida County, N.Y., in the summer of 1862. Camp Daggett, where this letter was written from, was named after their Colonel Rufus Daggett. The regiment saw action at Suffolk, Va., and in the 1863 Peninsula campaign. Ordered to the Department of the South, they took part in the siege of Fort Wagner and the operations around Charleston Harbor. In April 1864, they were ordered to Virginia where they joined the Army of the James and were engaged at Swift Creek, Drewry's Bluff, Bermuda Hundred, Cold Harbor, and Petersburg, where they were present at the Mine Explosion, fought gallantly in the battle of Fort Harrison, and were heavily engaged on the Darbytown Road. They were then sent to North Carolina where they participated in General Terry's 1865 Carolina campaign. The regiment fought with conspicuous gallantry in the final assault on Fort Fisher, and also saw action at Cape Fear River, Fort Anderson, and Wilmington. 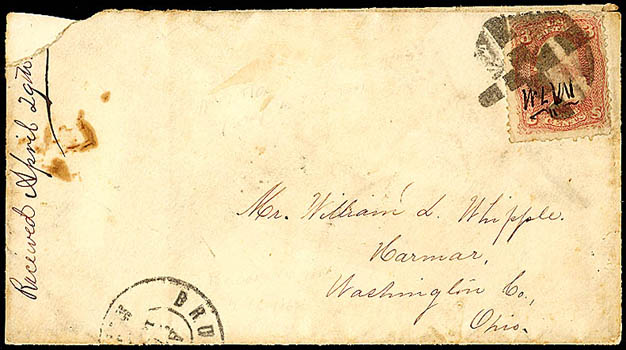 Confederacy, 1864 Brooklyn Fair Letter. Lengthy 4-page letter with interesting description of the Brooklyn Fair…The grand fair closed Saturday and they raised about $1,000,000. They have not done as well as Brooklyn after all, in proportion to their members. But it was splendid and though I was over but one day, I imagine there was enough to see to keep one busy for a week. The greatest excitement was the sword contest between McClellan and Grant. By paying one dollar anyone was entitled to a vote, for either Little Mac or U.S. Some gentlemen took 1,000 and some even more and the results was the Grant came our some 15,000 ahead. The sword brought over 44,000 to the Commission.; with original cover from Brooklyn (soiling and flaws), a Very Fine letter.
Estimate    $150 - 200.

Confederacy, 1865 Corpral Appointment. Of the 52nd regiment of Pennsylvania Volunteers, issued at the Head Quarters at Morris Island, S.C.; some central erosion in document, F.-V.F (no photo).
Estimate    $100 - 150. 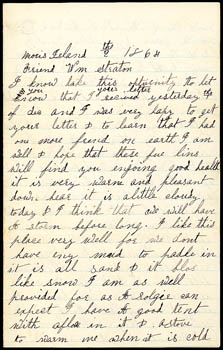 Confederacy, 1st New York Engineers. 1864 ALS -- 4pp letter from Erastus H. Olds of 1st New York Engineers, Company G., written phonetically with several errors, datelined "Moris Island, 2 1864", letter reads in part: "…you spoke about Davis arming the slaves but… he will know … that… the slaves are runing away as fast as they can get away & I think if he gives them arms they will have A beter chanced … he don't ofer to free any … you dont think that the male slaves will fight to free themselve and have thear wives and children held as slavs … I think they know more than that… we are prety clost to the rebs but I dont fear them … the sharp shoters peek at us but they dont hit us so I dont care … we have sunk 2 or 3 blockade runers since I have been hear… we have got that fort that we have been to work on… I spect that we shall have fun hear before long…", included is cover to New York with stamp cut out, Very Fine.
Estimate    $300 - 400. 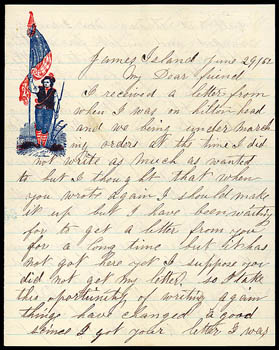 Confederacy, Battle of Secessionville, Patriotic Lettersheet. Multicolor design of Soldier & Flag datelined "James Island, June 29, '62" with wonderful contents regarding the Battle of Secessionville, "…since I got your letter I was well and strong, now I am wounded and unfit for anything…, we had a hard Battle in which our Regt. had to stand the blunt of it, being under fire 2 batterys beside 3 times our number of Infantry. We were under fire for four hours, we lost in 1100 men were killed and wounded. I got a ball in the side, but it is not dangerous.…, I sometimes think that we have got them whipped and then they will brake out in a new place, but we will conquer them or die. A well fought battlefield is an awful thing to look upon with its Dead and dying…, I almost wished that I was among the killed.", Very Fine, a wonderful & historic letter.
Estimate    $200 - 300.

The Battle of Secessionville (or the Battle of James Island) on June 16, 1862, was the defeat of the only Union attempt to capture Charleston, South Carolina, by land during the American Civil War.

In early June 1862, Maj. Gen. David Hunter transported the Union divisions, under the immediate direction of Brig. Gen. Henry Benham, to James Island, where they entrenched at Grimball's Landing near the southern flank of the Confederate defenses. Benham landed 6,500 men on the southeastern end of James Island, and marched toward Charleston. However, Brig. Gen. Nathan "Shanks" Evans, who commanded less than half that number of Confederate forces, met the Northern troops at a fort at Secessionville commanded by Colonel T. G. Lamar and routed them.

The Union suffered 683 casualties (107 dead), compared to 204 (52 dead) by the Confederates. Although the battle was minor, it served as a powerful propaganda victory, increasing morale particularly in Charleston and offsetting recent Confederate losses in the Western Theater.

Benham had acted against orders in attempting to take James Island, and he was subject to a court martial after the loss. The Union would continue to attempt to starve and attack Charleston for the rest of the war, and, had they succeeded, the "Fort Lamar" at Secessionville (which had been named not for the secession of South Carolina, but for an earlier attempt of some plantation owners to rebel) would have controlled the harbor. 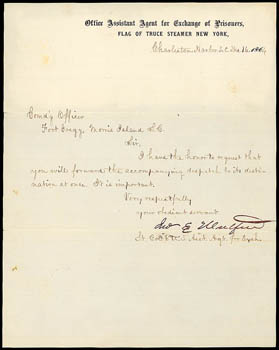 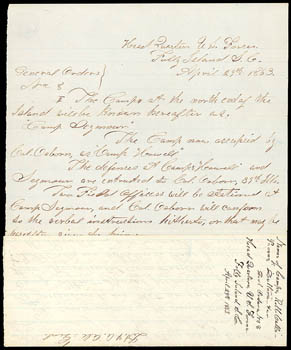 Confederacy, Folly Island, S.C. 1863 letter datelined "Head Quarters, U.S. Forces, Folly Island, S.C., April 29th, 1863, General Orders No. 8" which details names of camps on the island, Roll call, Sutlers will have a place assigned to them by their several Commanders…, Spirtous and Vinous liquors, well when allowed, be kept on board ships, and will be sold only by special permits…, By Command of Brig. Genl. Vogdes, Very Fine.
Estimate    $100 - 150. 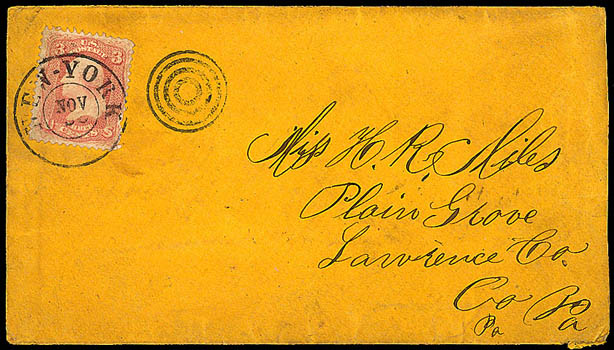 Confederacy, Hilton Head Island, South Carolina. Lengthy letter with interesting contents datelined "Hilton Head Island, South Carolina, Sunday Night November 24 1861" and reads in part, I don't know what is the reason that we have to work on Sunday here. We didn't used to when we was at home but here we have to obey these Big Officers here that rides around on their Big Horses with their boots blacked up, riding around giving orders and you have to jump at the word or wear the handcuffs awhile. It is as much as a bargain sometimes that we can keep from running our bayonets through them but that wouldn't do either so we just let them alone & work away.…, We have took the place of the slaves but we don't pick the cotton. We work with spades.…, We was all well this morning & Jim & I was taken out for carpenters to do some carpentry and all the rest went to work on the entrenchments as usual. So Jim and I went to work at tearing down a secessionist's house and put it up for a horse stable and there was a part of the roof fell down on me and knocked the sense out of me for a little while but I am able to scribble again. …, I don't like soldiering since it has come to hard work as this.…, included is original cover franked with 1861 3¢ rose mailed in New York & tied by "New York" duplex cancel, F.-V.F.
Estimate    $75 - 100. 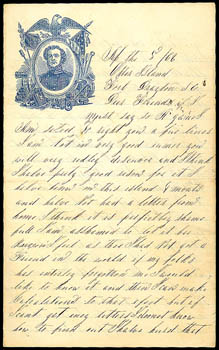 Confederacy, Letters of Wortman W. Owens 45th Pa. Vol. (Died in Service). 3 page letter in ink datelined "April 5th, 1862, Otter Isle, Fort Drayton, S.C." on Col. Duryea patriotic stationery in blue, written by Wortman W. Owens of the 45th Pa. Vol., he relates that he is ashamed that he has been there 8 months without a letter and feels that his folks have forgotten him, has sent $81 home and still has not heard from anyone, their camp is on the beach along with the Fort, tells of an abundance of fruit such as mulberries and blackberries but would like maple sugar from Home, well written and on a scarce patriotic stationery, Very Fine.
Estimate    $100 - 150. 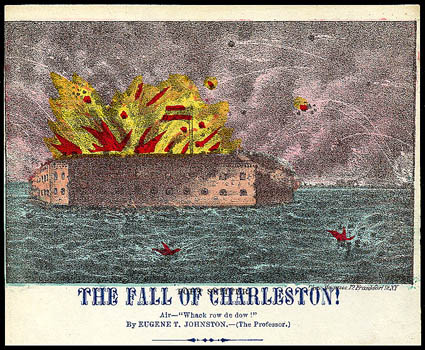