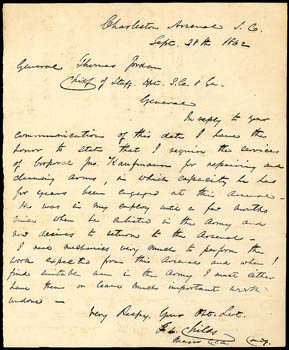 Confederacy, Charleston Arsenal. Autograph Letter Signed, "F.L. Childs Major C.S.A. Comdg" 1p. quarto. datelined "Charleston Arsenal, S.C., Sept. 28, 1862" & addressed to General Thomas Jordan and reads "In reply to your communication of this date I have the honor to state that I require the services of Corporal Jno. Kaufmann for repairing and cleaning arms, in which capacity he has for years been engaged at this Arsenal. He was in my employ until a few months since when he enlisted in the Army and now desires to return to the Arsenal. I need mechanics very much to perform the work expected from this Arsenal and when I find suitable men in the Army I must either have them or leave much important work undone.", Very Fine.
Estimate    $300 - 400. 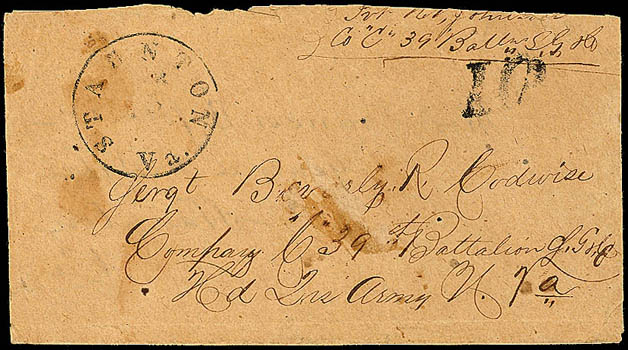 Confederacy, Company C, 39th Battalion S. G. & C. (General Lee's Personal Cavalry Command). Soldier's endorsed cover from private to sergeant of this battalion, "Staunton, Va." cds and matching "10" rate to headquarters of the Army of North Virginia, cover turned with inside addressed to the General Hospital in Staunton (missing stamp and most of postmark); cover slightly reduced at top into endorsement, Fine, this battalion consisted of only one officer and 80 men.
Estimate    $100 - 150. 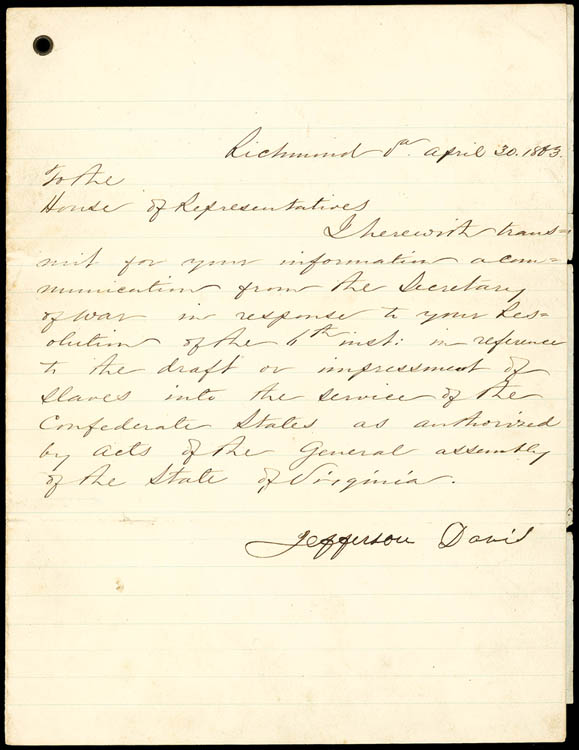 Confederacy, DAVIS, JEFFERSON, AS PRESIDENT OF THE CONFEDERATE STATES OF AMERICA. Letter signed, 1 page (264 x 200 mm), datelined "Richmond, 30 April 1863, To the House of Representatives of the Confederate States of America", grommet-stapled to a letter signed by Confederate Secretary of War James A Seddon, 1 page (250 x 202 mm) on C.S.A. War Department letterhead, 28 April 1863, to Jefferson Davis, the verso of Seddon's letter docketed "May 1st, Laid on Table"; short fold separations to Davis letter, some marginal fraying to Seddon letter, Very Fine

BOTH LETTERS IN REFERENCE TO THE IMPRESSMENT OF SLAVES INTO THE SERVICE OF THE CONFEDERATE STATES.

The Davis letters reads in full,

"I herewith transmit for your information a communication from the Secretary of War in response to your Resolution of the 6th inst: in reference to the draft or impressment of slaves into the service of the Confederate States as authorized by Acts of the General assembly of the State of Virginia."

The communication referred to by Davis is attached with a grommet staple Directed to President Davis from Secretary of War James Seddon, it reads:

"In response to a Resolution of the House of Representatives of the 6th inst., calling for certain information respecting the Acts of the General Assembly of Virginia concerning the draft or impressment of slaves for the service of the Confederate States, I have the honor to submit:

1. The Acts of the General Assembly of Virginia that have been communicated to this Department.

2. The letter of the Chief of the Engineer Bureau submitting estimates of the number of slaves required, at different periods, for the fortifications, with the reductions and exemptions subsequently recommended.

3. The letter of the Governor of Virginia transmitting the amendatory Act of March, 1863.

4. The letter of this Department transmitting the estimates of the Chief of the Engineer Bureau to the President."

THE MOVEMENT TO ENLIST AFRICAN-AMERICAN SOLDIERS IN THE CAUSE OF THE CONFEDERACY WAS ONE OF THE GREAT IRONIES OF THE SOUTHERN CAUSE. 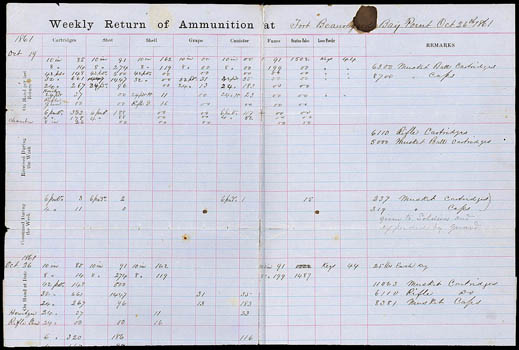 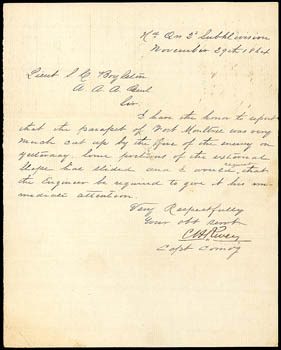 Confederacy, Fort Moultrie. Letter datelined "Hd Qr 2nd Sub Division, November, 29th, 1864", which tells of damage to Fort Moultrie by enemy fire, and reads, I have the honor to report that the parapet of Fort Moultrie was vey much cut up by the fire of the enemy on yesterday. Some portions of the exteranal slope has slided and I would request that the Engineer be required to give it his immediate attion., small internal mend tear, Very Fine appearance.
Estimate    $150 - 200. 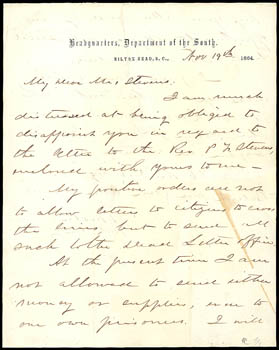 Confederacy, Headquarters, Department of the South, Hilton Head, S.C. Imprinted letterhead dated "Nov 19th 1864" with excellent specfic content regarding handling the mail, to wit, "My positive orders are not to allow letters to citizens to cross the lines but to send all such to the Dead Letter Office. At the present time I am not allowed to send either money or supplies, even to our own prisoners. I will keep your letter and if an opportunity offers, will send it to its destination." signed ? Foster, Mil. Comdg, Very Fine, A superb letter for the postal historian.
Estimate    $500 - 750. 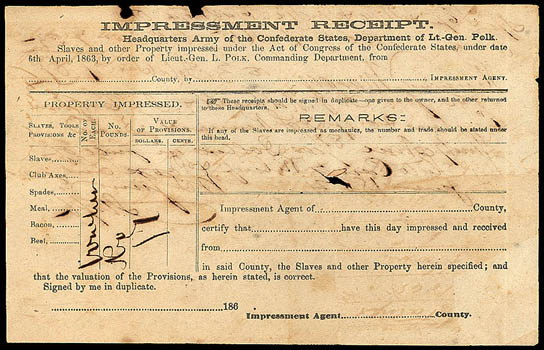 Confederacy, Impressment Receipt. Printed form for property forcibly taken by the Confederate Army, reverse with manuscript notation of what appears to be a receipt for slave labor; some ink erosion, F.-V.F.
Estimate    $100 - 150. 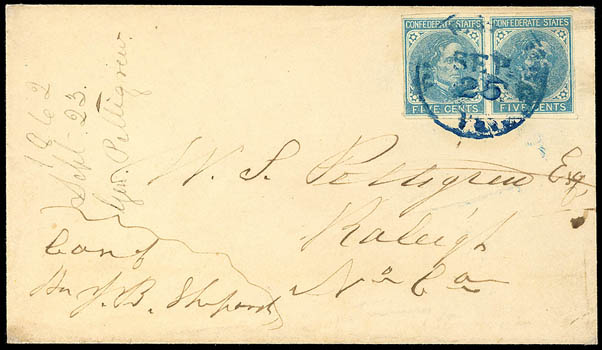 The cover is addressed in the hand of James J. Pettigrew, Brigadier General with docketing identifying Pettigrew as the sender. He had only recently been exchanged after being taken prisoner at Seven Pines and was now in charge of Petersburg defenses. A very rare item of which only two examples are known. 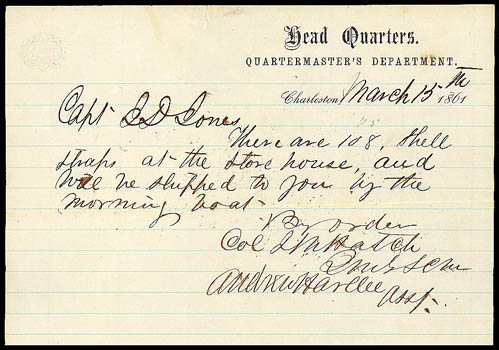