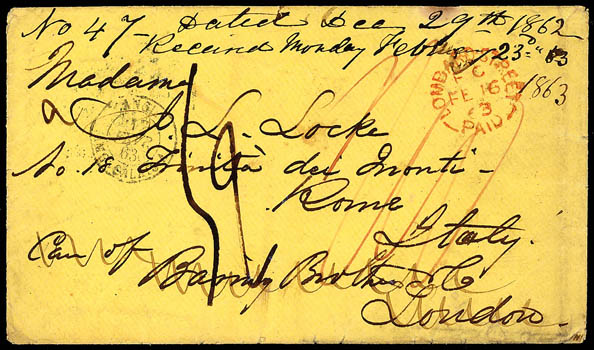 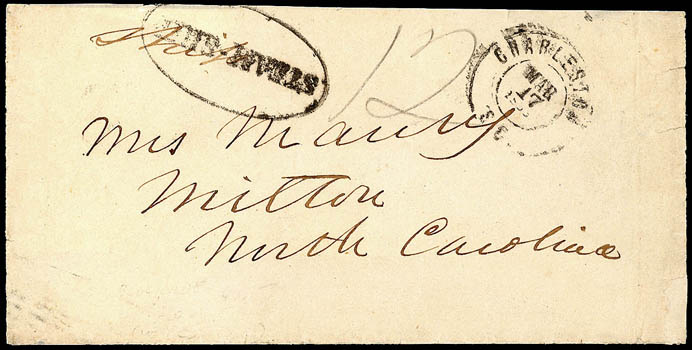 Carried by the blockade-runner Ruby (I), leaving Nassau Mar. 13, 1863, arriving in Charleston on Mar. 17 -- Lt. Maury was assigned to the commerce raider C.S.S. Georgia, which left England on Apr. 1. 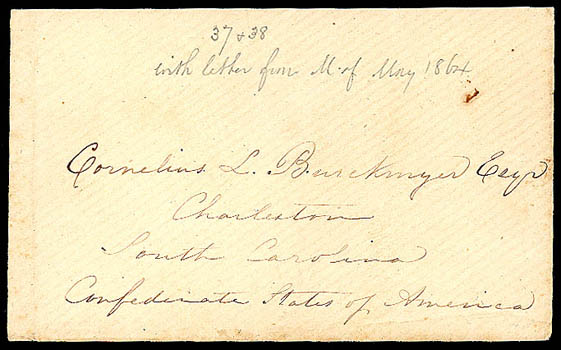 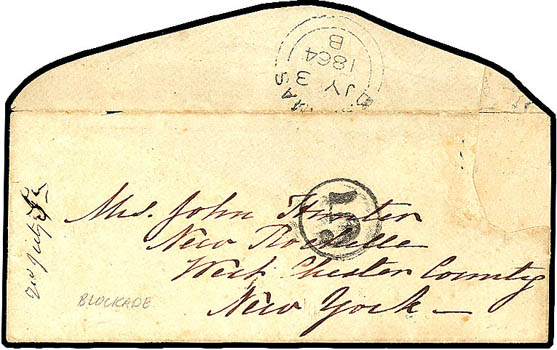 Confederacy, Outbound Blockade Cover to New York. Originating in Charleston, S.C. where "5" in circle rate handstamp was applied & sent through the Bahamas with "Bahamas JY 3, 1864" backstamp, signed under flap, "Approved by order, H.W. Feilden", a piece of the cover is missing at the upper right (repaired) where a stamp was removed, otherwise Fine; with 2004 C.S.A. certificate.
Estimate    $400 - 600.

Colonel Henry Wemyss Feilden (1838-1921) was a British citizen and the son of a baronet. He served in the Indian Mutiny Campaign of 1857-58 and in the campaign of 1860 in China. Retired by sale of commission in 1861, and joined the Army of the Confederate States of America. Served in 1862 to the close of the American War as Assistant Adjutant-General on the Staff of General Beauregard in the campaigns in Virginia, Georgia, South Carolina, etc., and surrendered along with the Army of General J. E. Johnson to General Sherman in North Carolina, April 1865, the termination of the War. Re-entered the English Service as Adjutant of Reserve Forces in 1866, and subsequently joined the Army Pay Department. Selected by the Royal Society and appointed Naturalist to the Polar Expedition of 1875-76 under Captain Sir George Nares. Served in the Transvaal War of 1881. Fellow of the Geological, Geographical, Zoological, and other Societies. 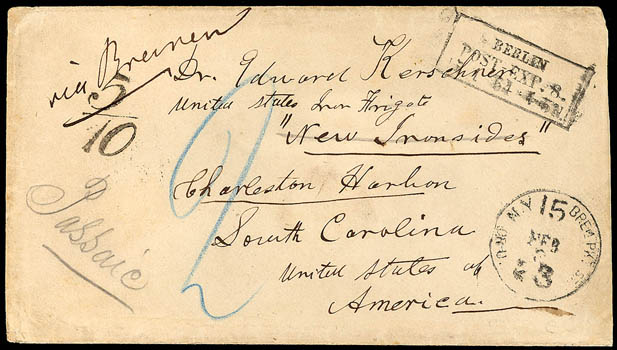 A remarkably rare usage from Europe to a doctor aboard the U.S.S. New Ironsides, according to www.history.navy.millésime "SS New Ironsides, a 4120-ton broadside ironclad, was built at Philadelphia, Pennsylvania. The last, and largest, of the initial group of three 'salt-water' armored warships begun in 1861 in response to meet the needs of the Civil War, she was commissioned in August 1862. Following a lengthy fitting-out period, she joined the South Atlantic Blockading Squadron in January 1863. For the next year, she operated in support of the blockade of Charleston, South Carolina, and took part in several attacks on the Confederate fortifications defending that city.". 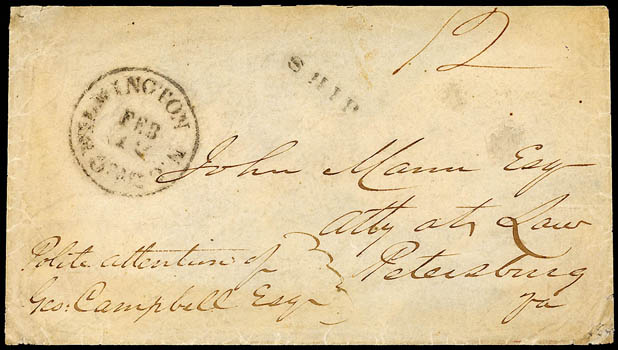