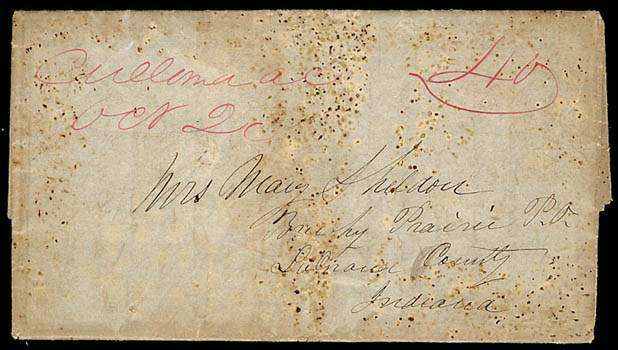 (El Dorado) Culloma, ac (Alta California), Oct 23. Red manuscript postmark and "40" red manuscript rate marking on stampless folded letter to Brushy Prairie, Indiana, letter from a recently-arrived miner is headed "Sacramento City Sept 30th 1849" and speaks of being ill after arriving in California and "I no longer look for the large fortune I anticipated when I left the states. I find these large fortunes are the result of accident and but few are so fortunate. We think we will do about… 2 or 3 thousand a piece for the time we think of staying. If we had that now we would soon start for home.", minor splitting at the folds, address panel fly specked and toned, Fine and rare, illustrated in Coburn's Letters of Gold (page 36).
Estimate    $200 - 300.

The discovery of gold at Coloma in 1848 led to the California gold rush. The Culloma Post Office was one of seven offices established by the Postmaster General's second Special Postal Agent in California, R. T. P. Allen, beginning in June of 1849. The early spelling of the town name persisted into the 1850's.

This folded letter is the basis for the October 20, 1849, listing in Williams of the earliest and only known Culloma manuscript postmark. However, the date of the postmark is actually October 23 rather than October 20. 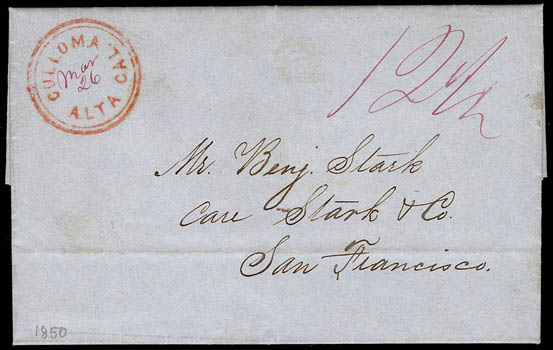 (El Dorado) Culloma, Alta Cal. Red double-lined cds with "Mar 26" red manuscript date and "12½" magenta manuscript rate marking on stampless folded letter to pioneer Oregon and California merchant Benjamin Stark in San Francisco, letter from a miner (Stark's cousin) is headed "Kelseys Road 23d March 1850" and notes that "The mail [is] leaving Columa in a day or two for San Francisco…" and "Mr. Marshall, the gentleman who was to call for my letters [in San Francisco], I have heard, concluded to stop till after the steamer now due arrives [from Panama]. If you have any [letters] now in your hands you will be so kind as to enclose them… care of Little + Co. "Columa" and drop it in the Post Office in time for the [next] mail [from San Francisco to Panama], which leaves about the 1st April.", Very Fine, ex-Haas, illustrated in Coburn's Letters of Gold (page 296).
Estimate    $200 - 300. 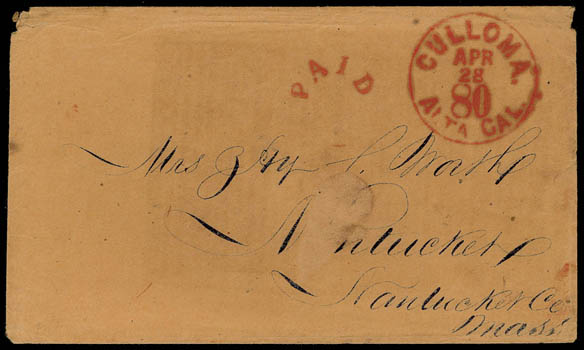 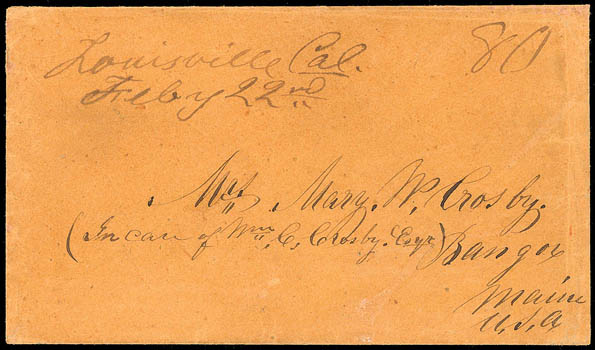 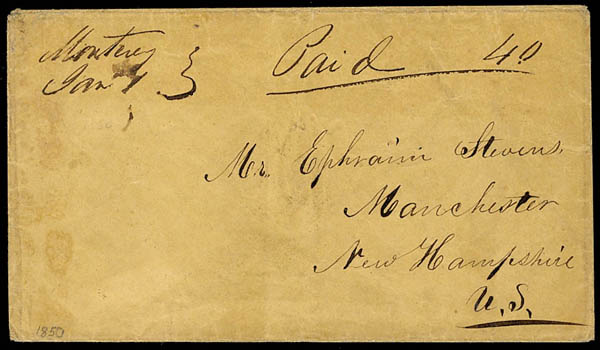 Monterey was the provisional capital of California under military rule before and after the Treaty of Guadalupe Hidalgo. A Post Office was applied for and granted and Captain William G. Marcy, Commissary and Quartermaster, was appointed postmaster. The appointment was approved by the Post Office Department on November 21, 1848. The only problem was that the three steamships that might carry the mails on the Pacific Coast via Panama were still en route from New York. In fact, none of the steamers had as yet even rounded Cape Horn.

The first Pacific Mail Steamship Company ship to arrive on the Pacific Coast was the S.S. California. On board was William Van Voorhies who, as the Postmaster General's first Special Postal Agent in California, was charged with the task of setting up postal service on the Pacific Coast. The S.S. California reached Panama in January of 1849, where it picked up an unexpected cargo of Argonauts. The ship reached Monterey the following month. At Monterey, Van Voorhies delivered the first official mails to Captain Marcy along with Marcy's bond as postmaster, which he executed on February 23, 1849. The S.S. California arrived in San Francisco five days later, at which time the crew promptly deserted her for the goldfields. 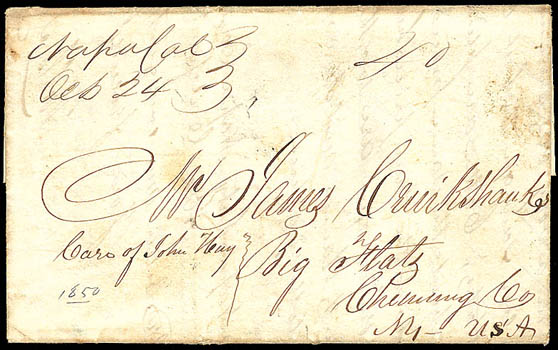 (Napa) Napa, Cal. Manuscript postmark on 1850 folded cover to New York with manuscript "40" rate, letter with excellent contents, "Well here am I in the lands, not cakes, nor yet in the land that flows with milk and honey, but in the land which is rich in gold and all other metals, mineral & precious stones. This is the place to garden with pleasure and profit." letter goes to description the raising of produce and grapes, plus much more, Very Fine and scarce.
Estimate    $200 - 300. 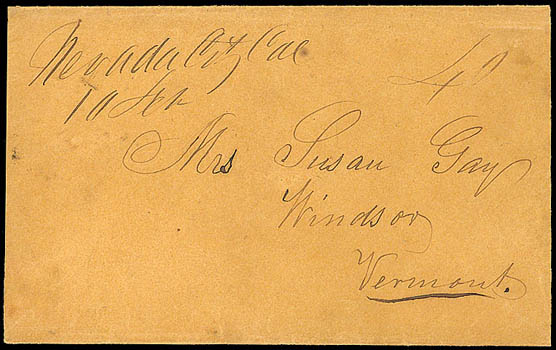 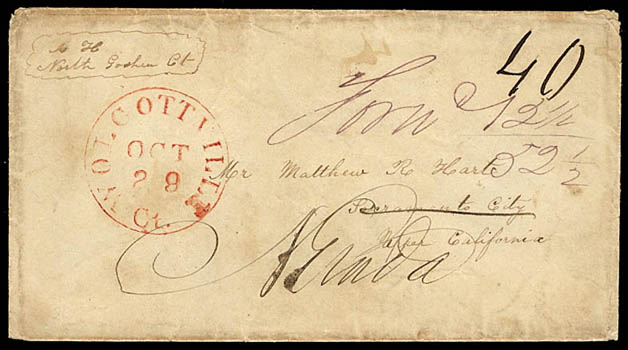 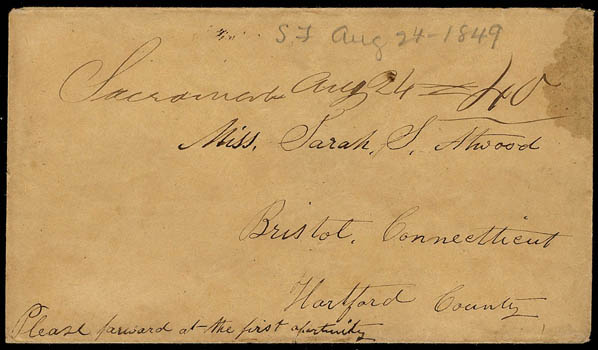 This cover is the basis for the August 24, 1849, listing in Williams of the earliest known Sacramento manuscript postmark. 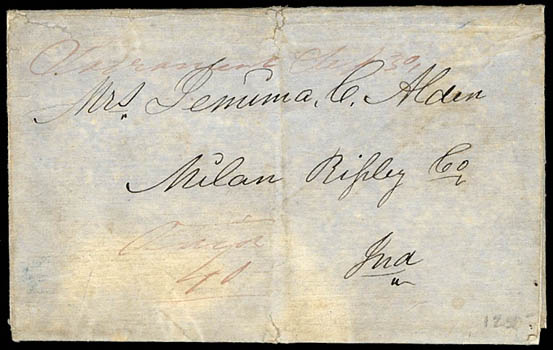 (Sacramento) Sacramento (Cal.) Sep 30. Magenta manuscript postmark and matching "Paid 40" manuscript rate marking on stampless folded letter to Milan, Indiana, letter is headed "Webberville Upper California Sep 23rd 1849" and reads in part "I have not dug any yet [as] we are setting up a grocery and I have been laying in the goods. I have no more time to write at present Mr. Stern is now waiting to start to the City. Direct your Letters to Sacramento City [as] it is unhandy to get letters from San Francisco.", some discoloration & silked at the folds, Fine.
Estimate    $300 - 400.

The Sacramento Post Office was one of seven offices established by the Postmaster General's second Special Postal Agent in California, R. T. P. Allen, beginning in June of 1849.