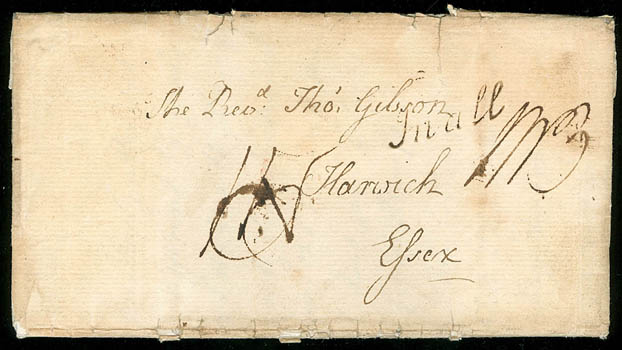 Occupation of Staten Island, October 1779. Entire dated "Staten Island Octr. ye 30th 1779" from Captain Thomas Gibson and written to catch the Falmouth Packet which left New York on the following day. Written during the seven year occupation of the island by British forces. Rated at Falmouth 1/- ("1N") packet rate arriving London December 22nd. Addressed to Harwich, the General Post Office up rated the charge to 1/3d. ("1N3") with the "In all" handstamp. Atlantic transit of 38 days, some slight edge wear, F.-V.F., a wonderful rarity.
Estimate    $1,500 - 2,000.

Occupation of Charles Town, South Carolina, December 1782. Entire dated "Charles Town South Carolina the 10 of December 1782" from Capt. John Ritchie of the Ship Providence to the vessels owners at Newcastle Upon Tyne. Written just four days before British troops relinquished the city to American forces. The letter arrived in London January 22nd 1783 and was charged a treble 3/- treble packet letter rate plus 4d. to London and a further 8d. to Newcastle making a total of 4/- written in manuscript ("4"). Atlantic transit of 43 days, Very Fine.
Estimate    $1,000 - 1,500.

Evacuation of York Town March 1782. Entire dated "New York March 23d 1782", and written by Capt. John Ritchie of the Providence, however the content states "We are now laying off York Town expecting to take troops on board every day." Taken by a naval packet to Falmouth where the letter was charged "2/-" double packet letter rate. Addressed to Newcastle Upon Tyne and re-rated "2N8" at London on April 26th adding 2 x 4d. double rate to Newcastle. Atlantic transit of 43 days, Very Fine.
Estimate    $1,000 - 1,500. 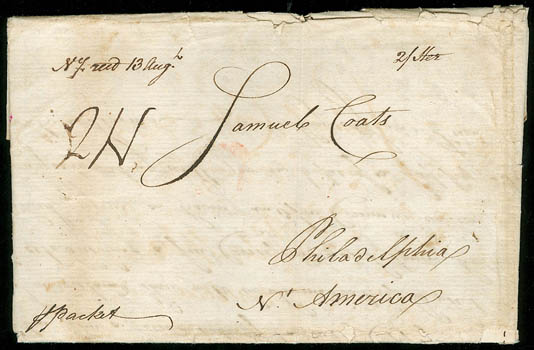 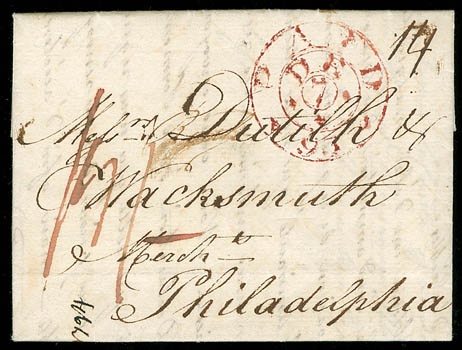 London to Philadelphia 1793. Entire being a "Modèle de Declaration" dated "Londres le 7 Deceme 1793" providing a sworn statement concerning the cargo of an American ship, the Active William taken as a prize "by the Private Ship of War the Weymouth, John Sturmer Commander". The agents acting for the American owners of the cargo, the addressees, were the Le Cointe Brothers, Merchants of Devonshire Square, Bishopsgate, London. Paid the 1/- packet rate and posted on the day of writing to Philadelphia. At New York the letter was rated at the private ship charge of 4 cents plus 10 cents inland to Philadelphia and manuscript endorsed "14"., Very Fine.
Estimate    $400 - 600. 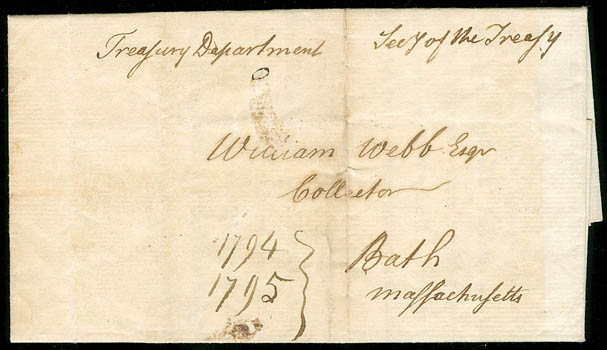 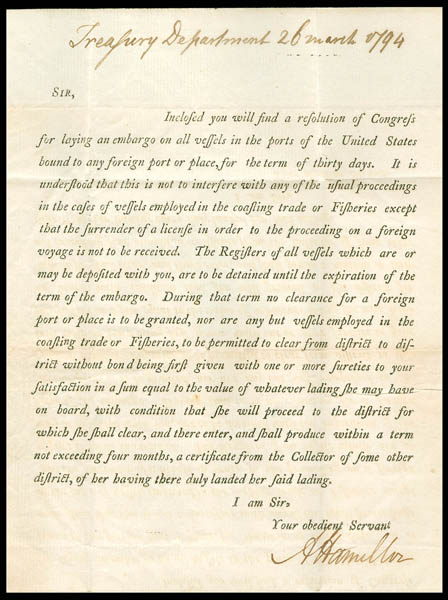 Sailing Embargo of March 1794. Treasury Department circular addressed to the Collector (of taxes) at Bath, Massachusetts and signed by Alexander Hamilton (Secretary of the Treasury 1790 - 1795) announcing an embargo on the sailing of all vessels bound for "foreign port or places, for the term of thirty days"; some faint toning, Very Fine.
Estimate    $2,000 - 3,000.

At the time of the circular a rebellion was occurring to the payment of Federal import and export taxes imposed by Hamilton. Hamilton himself, who had been Washington?s ADC during the Revolutionary War, led a force to the Pennsylvania ports to put down the rebellion.

Hamilton tried to gain nomination for the Presidency against Thomas Jefferson but failed. In the course of this campaign he made an enemy of the opposition contender, Aaron Burr. This culminated on the 11th July 1804 in a duel between the two in which Hamilton was mortally wounded. 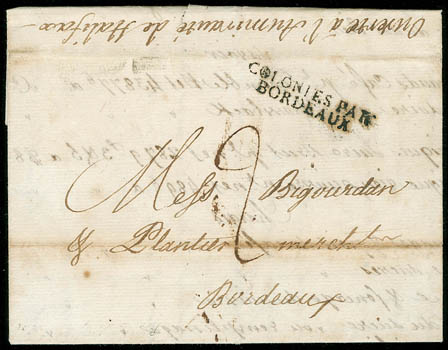 Examined at Halifax by Admiralty Prize Court 1806. Entire dated "Philadelphia le 12 aout 1806" and put onto the Ocean Gay for Bordeaux. Intercepted by the British Navy and taken to Halifax, Nova Scotia for examination by the Admiralty Prize Court. After examination reverse was endorsed "Ouverte á l? Aumirautè de Halifax" and the letter was released with the ship. Arrived (from filing note) at Bordeaux 7th January 1807 to receive that offices "COLONIES PAR / BORDEAUX" stamp and charged 2 decimes being the ship letter rate for letters addressed to port of landing; some toning along horizontal file fold, Very Fine.
Estimate    $5,000 - 7,500.

During the Napoleonic Wars (1799-1815) neutral America continued to trade with both Britain and France, as well as their ever-shifting European allies. The U.S. cartel ships sailed under flag of truce, which at least in theory protected them from both military attack and capture by the privateers who roamed the seas under letters of marque. They were, however, subject to being stopped and searched to ensure that they carried no prohibited cargo nor intelligence. This cover is an extremely rare example of censored mail from that era. 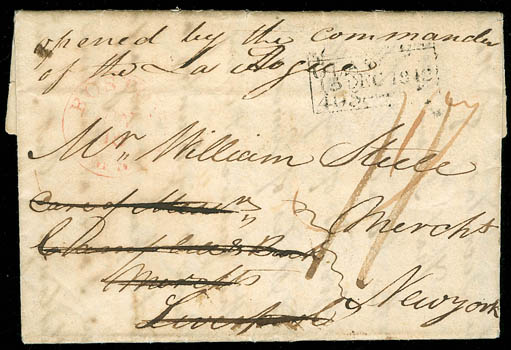 Glasgow - Liverpool - Boston, Letter endorsed "opened by the commander of the La Hogue". Entire dated "Glasgow 12th Decr 1812" and received the Glasgow 405 Mile datestamp for the following day.Addressed to New York to be forwarded at Liverpool and prepaid 11d The letter bears the weak arrival stamp "BOSTON MS / JUN / 5" indicating that the British held the ship for some time before releasing her, perhaps taken to an Admiralty Prize Court. The La Hogue was a 74 gun vessel commanded in 1813 by Captain, later Admiral Sir Thomas Bladen Capel. Letter written by James Thomson, a citizen of the USA trying to discharge debts of "between £20 to £30,000 Sterling" before returning to the USA. Portion of letter containing the text:"I am only permitted to remain here by virtue of a permission or licence from the Secretary of State for the Home Department. I have been offered a commission in the local militia but refused it on the ground of my allegiance to the United States of America.", Very Fine.
Estimate    $5,000 - 7,500.

"Per Cartel Friends Capt. Hopkins" of 17 July 1812. Large part entire dated from Norfolk, Virginia carried as a ship letter to Portsmouth under a flag of truce. Content states "…we feel alarmed here since the Declaration of War…" Examples of letters clearly marked on their outers as going by such Cartels are relatively rare Charged "2/3d." being 1/3d. to Falmouth plus 1/- inland which should have been reduced by 1d. Addressed to Ayr, at Portsmouth received the "SHIP-LETTER / Crown / PORTSMOUTH" routed via Glasgow to Ayr. Charged 1/6d. being 4d. ship letter plus 1/2d. inland. (Act of 1812), F.-V.F.
Estimate    $1,500 - 2,000.

"P Cartel Cartaret from N. York" of August 1812. Entire addressed to Dorking, Surrey and carried to Falmouth by the Post Office Packet Cartaret under a flag of truce from New York. Reverse bears a London transit for 6th October 1812., Very Fine.
Estimate    $1,500 - 2,000.