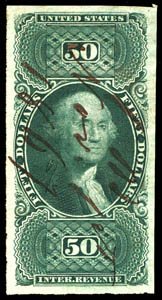 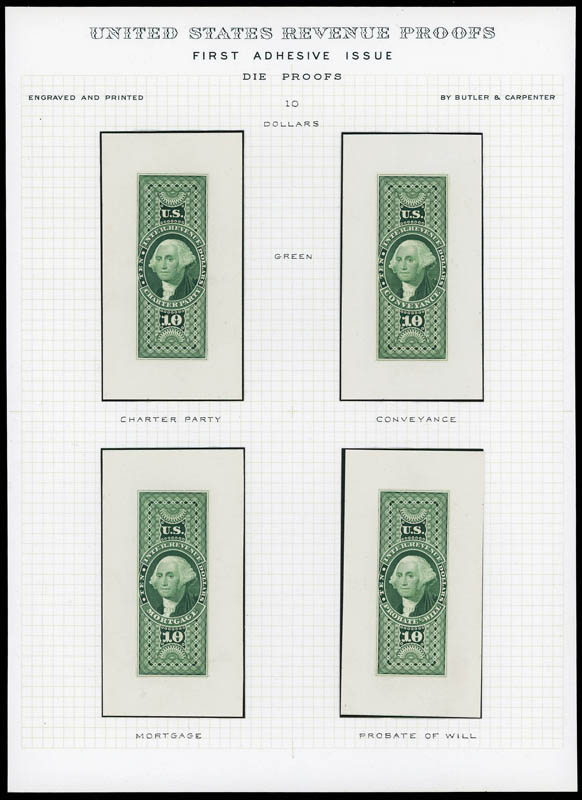 Revenue, 1862, First Issue, $10 Issues complete, large die proofs, all four issues; Charter Party, Conveyance, Mortgage and Probate of Will, on India design size, rich colors and remarkably fresh, each mounted on original Joyce album page, Very Fine and choice, only the Probate of Will issue is listed in the Scott catalog, ex-Joyce.
Scott No. R93P1-R96P1    Estimate $3,000 - 4,000. 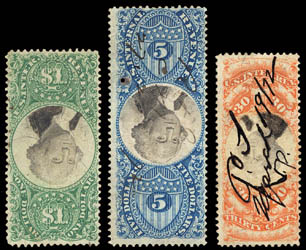 These uniquely devised forgeries where described by Elliot Perry in his publication Pat Paragraphs as coming from the so-called Henn Collection and where at one time though to be genuine. It is suggested that in about 1903, when the old Toppan, Carpenter & Co. bed pieces containing essay designs for the U.S. postage stamps of 1861 (as altered from the stamp designs of 1851-60) were sold, that at least four "essay heads" of Washington went into private hands and were used to create illegitimate inverted medallions on U.S. revenue documentary and general issue proprietary series of 1871-74…The portraits on those revenue stamps were purposely printed in a fugitive black ink which can be bleached, On the blank medallion space so obtained one of the old essay heads was printed upside down, thus creating for stamp collectors quite fraudulent "varieties" of which no part is actually counterfeit. 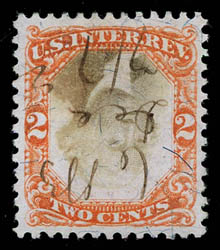 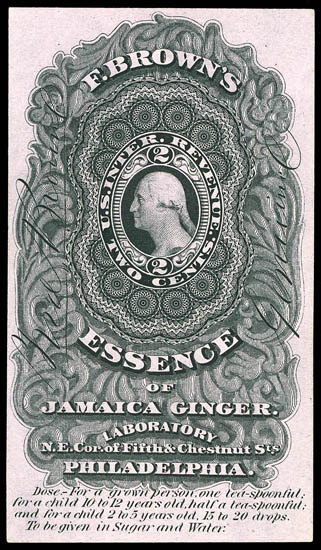 Brown, Fred, 2¢ black, die I, pink paper, full nicely balanced margins, rich color and sharp detailed impression on bright fresh paper, Extremely Fine, only 16 are recorded in the Aldrich census (of which 4 are reported to be faulty); with 2006 P.F. certificate.
Scott No. RS37c    $3,750.

ONE OF THE FINEST SOUND EXAMPLES OF THE FRED BROWN 2¢ BLACK ON PINK PAPER ISSUE.