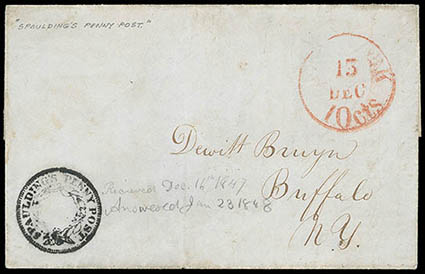 THE ONLY RECORDED EXAMPLE OF SPAULDING'S PENNY POST COIN HANDSTAMP WITH VALUE REMOVED.

Proprietor of Spaulding's Penny Post, Enos W. Spaulding, raised the posts letter rate on November 15th, 1847 from one to two cents. Three different Spaulding's coin handstamps are known and are all unique. The first bearing the "One Cent" value is undated but obviously was used prior to the rate change. This cover with the value removed was posted approximately one month after the rate change to two cents. A later usage of the coin handstamp in April of 1848 bears a illustrated dove at the center. Shortly thereafter, Spaulding introduced his Striding Messenger handstamp and adhesives. 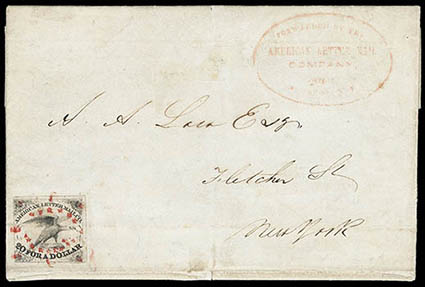