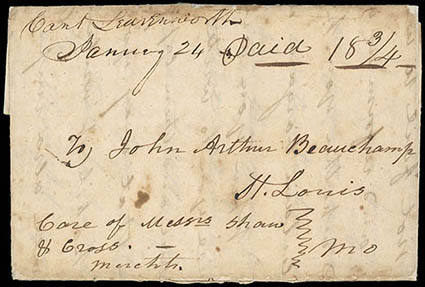 (Unorganized Missouri Territory) "Cant Leavenworth, January 24", manuscript postmark and "Paid 18¾" rating on folded letter datelined "Fort Leavenworth, 25th January 1833" to St. Louis Mo., endorsed "Care of Messrs Shaw & Cross Merchts", letter mentions travels "…I reached home from Council Bluff on the 10 Inst. or rather, I arrived on the opposite side of the river and the ice was running to such a degree, that they could not cross for me. I consequently had to go down to Liberty and wait till the ice ceased running…"; light toning and edge wear, F.-V.F.
Estimate    $500 - 750. 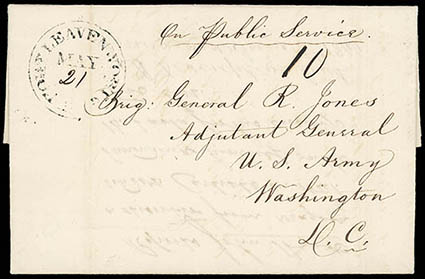 (Unorganized Missouri Territory) Fort Leavenworth, Mo. May "21", cds with manuscript day and matching "10" rating on folded letter datelined "Head Quarters May 19, 1846" from Capt. J. Burgwin to Brig. General R. Jones, Adjutant General, U.S. Army, Washington D.C., endorsed "On Public Service", letter from commanding officer reading "…a man calling himself 'John Hood' and representing himself to have deserted from the Carlisle Barracks in 1841 being then a Dragoon recruit, surrendered himself to me…"; light file fold, clean and Very Fine.
Estimate    $150 - 200.

Fort Leavenworth was part of unorganized territory from establishment in 1828 until 1854 when Nebraska Territory became a state.