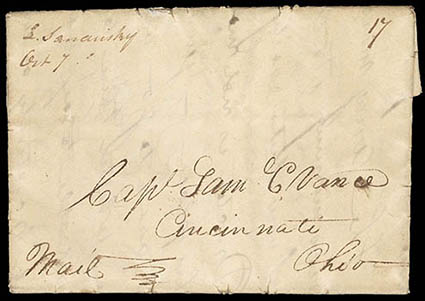 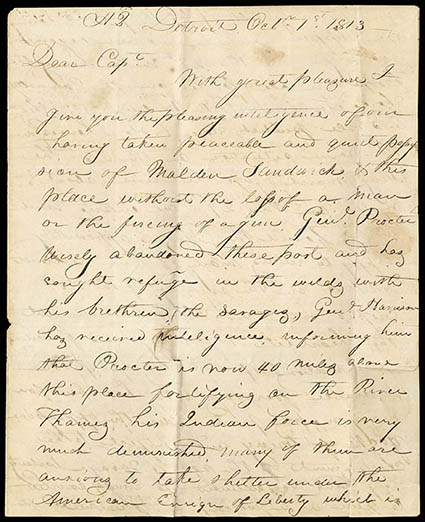 (War of 1812) "H.Q. Detroit Octr. 1st. 1813", dateline on folded letter carried to nearest post office, entered mails with manuscript "L. Sandusky, Oct 7" postmark and "17" cent rating to Capt. Sam C. Vance, Cincinnati Oh., great content including, "Dear Capt., With great pleasure I give you the pleasing intelligence of our having taken peaceable and quiet possession of Maiden Sandwich & this place, without the loss of man or the firing of a gun. Genl. Proctor wisely abandoned this post and has sought refuge in the wilds with his brethren (the savages), Genl. Harrison has received inteligence informing him that Proctor is 40 miles above this place fortifying on the river Thames. His Indian force is very much diminished. Many of them are anxious to take shelter under the American Ensign of Liberty which is gloriously flapping its wings and hovering over upper Canada and our regained Territory. On the 27th in the evening the troops were all landed on the Canada shore we found Fort Maiden in ashes and all public stores and store houses in the same situation. On the 28th the Army marched up the river about 5 miles, on the 29th we entered Sandwich 1 found citizens apparently happy to see us. Many of them no doubt truly so. On the evening of the 28th Crossed over into this place amidst the heart felt rejoicing and felicitous acclamation of hundreds of poor miserable persons who had been for many months past under the oppressive gook of teriny and subject to the chastisement of the rod of savage barbarits. Every hand was extended and lungs exerted to give us a welcome and grateful reception immediately after the embarkation of the troops at Sandwich for this place the American flag again waived over the remaining walls of the destroyed Fort Detroit which was burned three days previous to our arrival. The army marches again tomorrow morning, its destination mot generally known, but easily to be conjectured. Proctor is not more than 40 miles above this place - Genl Mc-Arthur’s Brigade I’m told are to go on to (Fort) Michilimack - inac whether there to remain or not I’m not able to say. We shall go by water if positively ordered to that place. I’m anxious to see that country, tho have not much inclination to winter there…Yours Sincerely CS Clarkson", Fine.
Estimate    $1,500 - 2,000.

A REMARKABLE WAR OF 1812 LETTER CONCERNING THE TAKING OF FORT MALDEN. 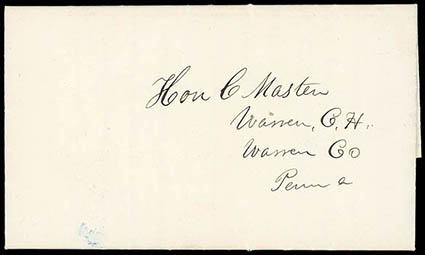 (Missouri) "Camp Lucas, May 30, 1847", dateline on folded letter to Hon. C. Master at Warren C.H., Pa., letter from soldier to his father reading in part "…Else this reaches you I will be on my way to Sante Fee. I am appointed Ensign for the Battalion. I will send all my clothes home… Write me every month as the mail leaves every month for Sante Fe. Direct to J.V. Master, 1st Battalion of St. Louis, Volunteers, Comp (E), Sante Fe, New Mexico…Excuse haste we march in the morning. Now if you can get me an office in the regular army. It will be acceptable.", fresh and Very Fine.
Estimate    $150 - 200. 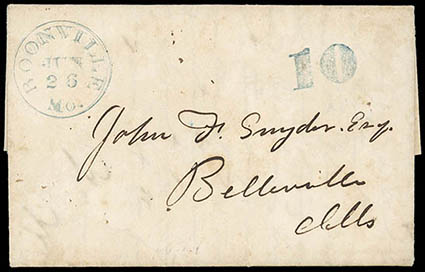 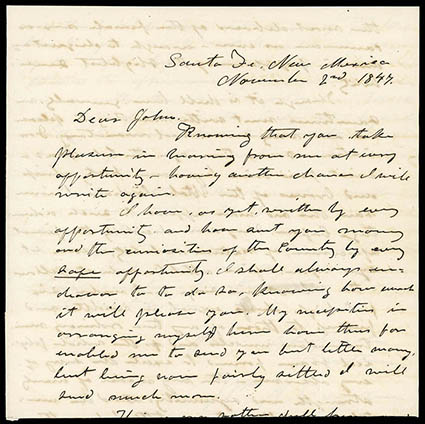 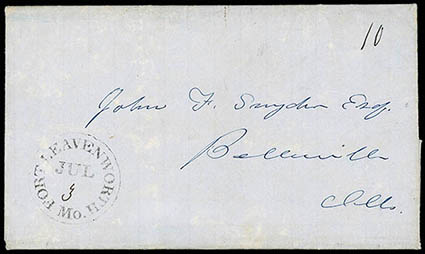 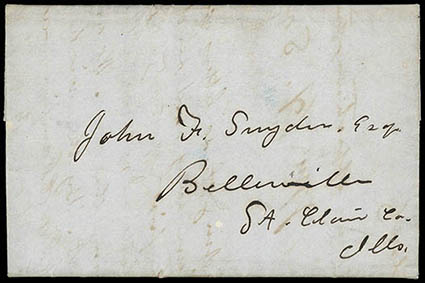 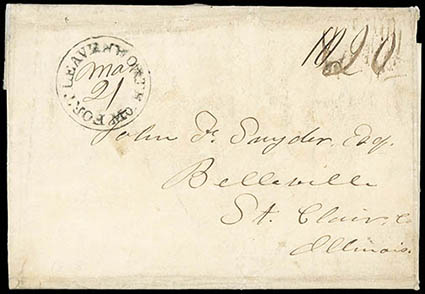 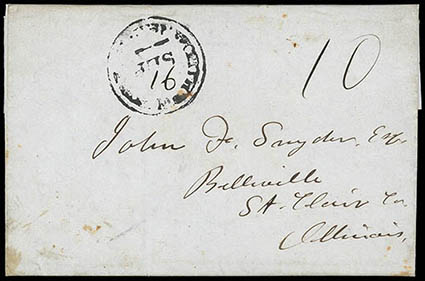 1847-1848, Illinois Volunteers on the Santa Fe Trail, 15 letters from members of the 1st Illinois Volunteers, traveling on the Santa Fe Trail in the summer and fall of 1847 and returning in 1848. Though the fighting had ended in that part of the eventual Mexican cession, soldiers were being sent to hold it for the United States. The letters begin upon steamer "L.V. Lind" in the Missouri River at Boonville, Missouri, and follow the regiment to Ft. Leavenworth, Cottonwood Creek (near current-day Lost Spring, KS), Cold Spring (in what is now the Oklahoma panhandle), and Santa Fe, with one letter from Cold Spring on the return trip. Most are to John Snyder in Belleville, IL, from his brother William. The soldiers raise hell in Missouri, foraging and even stealing alcohol. The trek is at first a "pleasure trip…We have found the most beautiful country" rather than the dry brush they were told about. But that was still in Kansas! some excellent military content upon arrival at Sante Fe from William including Oct. 18th 1847: "An expedition to El Paso some 337 miles from here will start on Thursday next, and with it if I live I am soon to go. Our company has refused upon taking the vote, to go. I am very sorry for this as from all accounts a fine opportunity to do something worthy of this soldier…The expedition will consist of eighteen of as fine companies as the U.S. service can boast of five Companies of the Mo. Battalion of Infantry, five Companies of the Mo. Mounted Regt., Capt. Henson detail light Artillery and Co. G. of the 1st Regt. U.S. Dragoons. We will go to the Pass (El Paso) where we understand that Armijo is waiting for use with some 1,500 or 2,000 men and after getting through them will probably advance against Chihuahua and Durango…", Sante Fe Nov. 14th by military express "…The Colonel had a visit from chiefs of the Utah tribe (Utes) they are decidedly the finest specimens of natures nobility, I ever set my eyes on…" and notes "There is an express going out this day to the States…Colonel Newby is not liked at all there is not a man in Sante Fe that like him he is going way in few days we are looking for Colonel Price every day…", Sante Fe March 1848 "…New has arrived…to the effect that Gen. Uruea with a force of from six to ten thousand strong is advancing against the Territory. But two days since it was reported that he had advanced upon El Paso, and totally defeated Col. Ralls of the missing only. Mntd Regt. The latter suffering a loss of one hundred killed alone…Last night and this morning we added travel reports to the effect that Uruea with seven thousand men, was at a town called Donana - forty five miles, this side of El Paso. If this be the case, he has defeated by far greater part of the force that Gen. Price intended to rely upon, ad there is hot working store for us suckers…we have a fight in the territory it will be with tremendous odds against us….", Sante Fe Apr. 24th 1848: "…Next Monday (1st May) I am off for a campaign against the Navajo Indians. Our detachment will consist of one hundred and fifty Missouri Volunteers under Major Reynolds and fifty Illinoisians who have been mounted for that purposes - under command of Capt. Moses of our Regiment the whole under command of Col. Newby. Our campaign will be through one of the toughest and most desolate regions in the world, being that Country between this territory and the California basin…Governor Armijo was captured by Genl. Price in an action last month at Santa Cruz. He is now upon is parole and residing at Albuquerque. We are daily expecting his arrival here….I wonder how the old fellow will feel when he finds me, a U.S. volunteer occupying his most spacious room at his old Palace. Our news from the South Mexico as well a from the U.S. induce us to believe that peace will soon be made…" With much interesting content on sickness in the ranks, searches for Sterling Price (who had gone south to Chihuahua), and William's growing collection of Native American artifacts, meteorites, and other curiosities from the Old Southwest., F.-V.F., ex-Risvold where it brought $20,000+.
Estimate    $7,500 - 10,000.

(2) 6-28-1847 Fort Leavenworth Finally arrived after the steamboat hit many snags in the river, and health of the troops not good as sixty men are sick with measles.

(3) 7-3-1847 Fort Leavenworth Nothing much, training and packing supplies getting ready to depart for Santa Fe.

(4) 8-2-1847 Cottonwood Creek On the Plains 173 miles from Fort Leavenworth. Constant wind and cold weather in August need three blankets every night, but enjoying the best health ever.

(5) 10-18-1847 Santa Fe, New Mexico Letter sent via Mr. Coon. Looking forward to going to El Paso and a battle against Gen. Armijo 2,000 men. We have 18 companies from Missouri and Illinois with artillery and will soon leave.

(6) 10-18-1847 Santa Fe Parcel Letter via Military Express Lt. Snyder is a collector sending home native clothing items from the Indian Pueblo, and a gold ring worth $16.00 made from gold mined twenty miles away.

(7) 11-2-1847 Santa Fe Parcel via Military Express The Colonel met chiefs of the Utah tribe (Utes), and are the finest specimens of natures nobility, I ever set my eyes on. Much illness, but the health of the men is rather improving.

(8) 11-14-1847 Santa Fe Fair with tear I had spell of fever, and seven have died out of our companie, and 50 died since we came here. Colonel Newby is not like at all and we hope for a change when Colonel Price arrives.

(10) 2-10-1848 Santa Fe Parcel Letter via Military Express Capt Turner has stolen a great deal of the regiment's money he was given to be taken home for the men. We hope to find him as this very sad.

(14) 4-24-1848 Santa Fe Parcel letter via Military Express Leaving soon for campaign against the Navajos in the West.