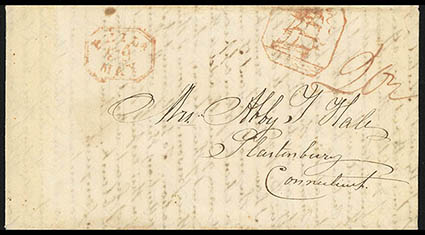 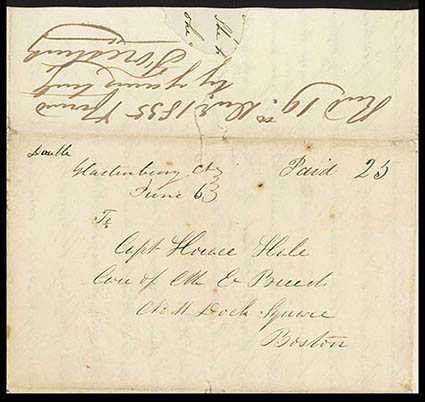 A WONDERFUL EARLY CORRESPONDENCE FROM AFRICA AND THE FAR EAST. 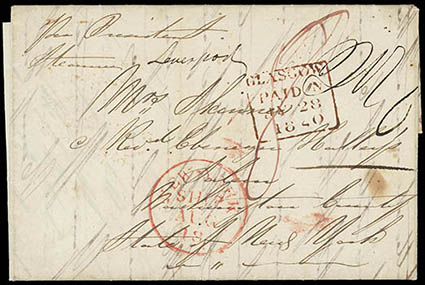 A SCARCE USE CARRIED ON THE MAIDEN VOYAGE OF THE PIONEER STEAMSHIP "PRESIDENT".

The "President" of 2,366 tons was built at Carling & Young's London yard in 1840 for The British and American Steam Navigation Company. Left from London on her maiden voyage to New York on the 1st August 1840 arriving on the 18th. On the "President"'s fourth return voyage from New York she was lost without trace on the 11th March 1841 with the loss of 136 lives. This would bankrupt the British and American Steam Navigation Co. 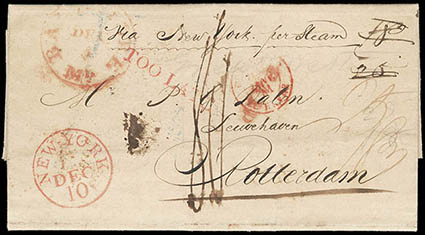 Letter endorsed for the steamship Great Western from New York, however it arrived at New York the day after the steamship sailed. It was marked with a red handstamp "TOO LATE" and placed on the next sailing packet for France. The New York postmaster normally returned unused freight money fees to the origin post office. Letter marked for 80 Dutch Cents postage due, 50 Cents French transit and 30 Cents for Dutch transit from Bergen to Rotterdam. Letter considered a freight money cover even though it was transported across the Atlantic on a vessel that did not charge the freight money fee. 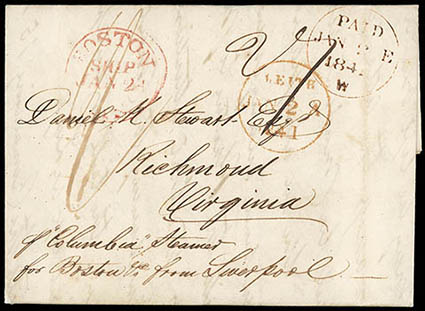 "Columbia" was the last of the original four wooden, side-wheel paddle steamers with which Samuel Cunard started the operations of his line in July 1840. She was 1,175 tons and built at Greenock in 1840. She ran aground and was wrecked at Cape Sable, Nova Scotia on July 2nd 1843 without loss of life. 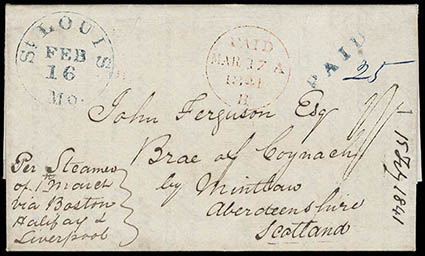 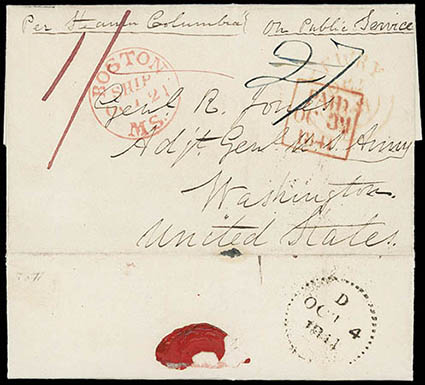 The dotted-circle Liverpool datestamp was used only in 1841 on outgoing packet letters carried by Cunard. 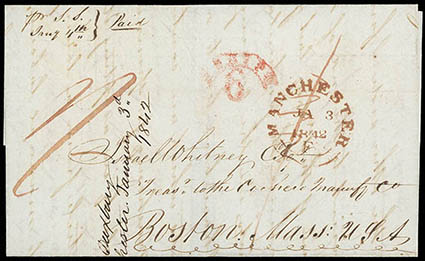 Letter marked one penny in red ink for British inland fee in error and then marked 1 shilling for the packet rate. Liverpool transit octagonal datestamp on reverse has the code letter "D" at the top, a scarce version of the uncommon octagonal marking. Less than a half dozen examples have been recorded and they were used for a three week period from December 1841-January 1842. 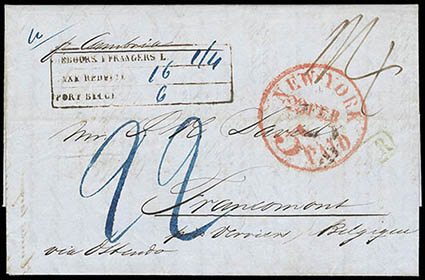 Letter endorsed "p Cambria" and included among the 8,000 letters sent to Boston on the coastal steamer Mohegan from New York which was delayed in a snow storm and missed the sailing of Cunard steamship Cambria on Mar. 1, the scheduled contract steamer. Boston's postmaster sent the delayed mails on the next available sailing ship to Liverpool. London debited Belgium 1s 4d under Anglo-Belgium Treaty of 1844 (8d ship rate plus 8d British transit to Belgium). Belgian accounting handstamp shows 16 decimes owed to U.K. plus 6 decimes internal fee for total postage due of 22 decimes. 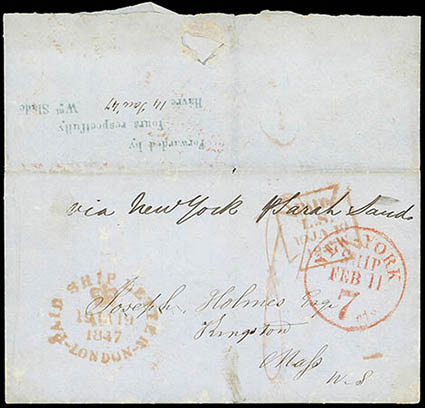 A RARE USE CARRIED ON THE MAIDEN VOYAGE OF PIONEER STEAMSHIP "SARAH SANDS".

The "Sarah Sands" of 1,400 tons was built for Sands & Company of Liverpool by James Hudson & Company, also of Liverpool as an iron screw propelled vessel and launched in September 1846. The maiden voyage from Liverpool to New York left on the 20th January 1847 and the Prices Current shown below traveled on that voyage.