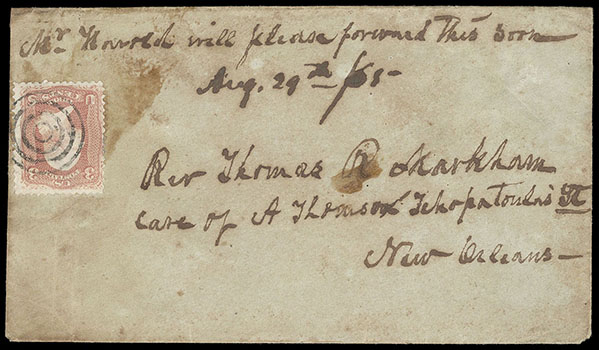 This is an unusual "post-war" use similar to another Markham correspondence use offered in the Skinner sale at Siegel (see sale 832, lot 3224). 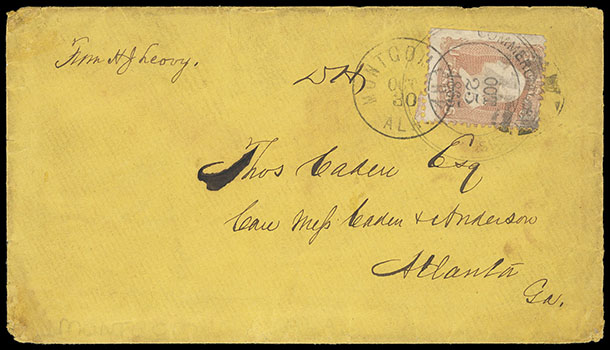 ONE OF ONLY THREE RECORDED EXAMPLES OF THE LARGE DOUBLE-CIRCLE COMMERCIAL EXPRESS COMPANY DATESTAMP.

The Commercial Express Company was a private express company with headquarters in New Orleans La. that operated from July 1864 until February 1866. Larry Ballantyne wrote the most comprehensive article on the company published in the Penny Post (October 2009) with a census of 13 covers with two large double-circle datestamps (this is not one of them). 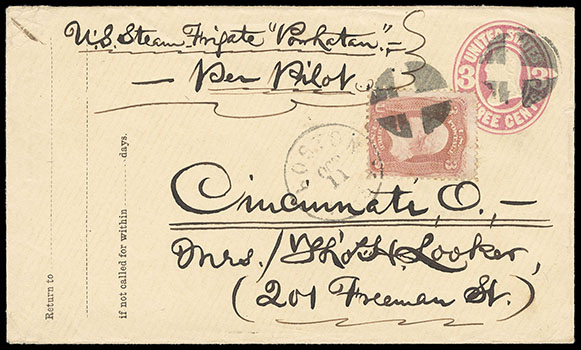 (Naval) U.S. Steam Frigate "Powhatan" - Per Pilot, ship endorsement on 1864, 3¢ pink entire uprated with 1861, 3¢ rose tied by "Boston, Oct 11" cds and quartered cork duplex, to Cincinnati, O., with two original Boston Harbor enclosures, one datelined "Oct 8/65" with interesting content…"We have dropped down the Harbor some three or four miles & are now near Ft. Warren - (the Fort where the great Rebel prisoners Alex'n H. Stephens & Co. are confined)", and a second departing letter datelined "Oct 11/65" announcing the ships departure "[Per the Pilot]", accompanied by a 1865 "The Pilot Office, Boston, Mass." corner card cover, Very Fine, believed to be the only cover endorsed "Per Pilot".
Scott No. 65    Estimate $400 - 600.

The Pilot was the vessel which guided ships in and out of the Boston Harbor for a fee.