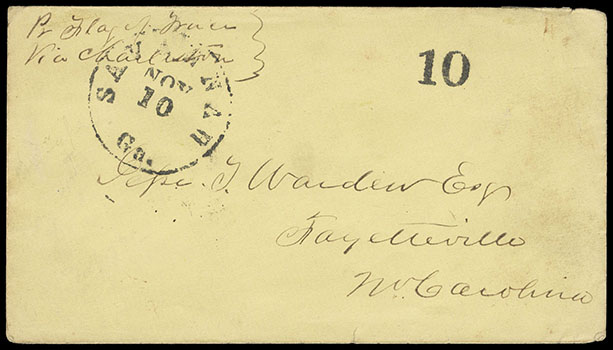 AN EXTREMELY RARE FORT PULASKI PRISONER OF WAR COVER, ONE OF ONLY A HANDFUL RECORDED WITH A SAVANNAH GA. POSTMARK.

Capt Henry W. Horne of Company C 3rd N.C. Infantry was captured at Spotsylvania C.H., Va. on May 12, 1864 and confined at Fort Delaware and transferred to Morris Island in Charleston Harbor in late August 1864 as a member of the Immortal 600 arriving on or about September 7, 1864. As an Immortal 600 P.O.W. at Morris Island, Capt Horne was under fire from the Confederate batteries in Charleston from early September 1864 until he was transferred to Fort Pulaski on or about October 21, 1864. Capt Horne was then relocated to Hilton Head S.C. November 19, 1864 and then returned to Fort Delaware March 12, 1865. He was released June 6, 1865. This cover dated on November 10, 1864 was mailed during his brief time at Fort Pulaski. A very similar cover from the same correspondence from Capt Horne when he was at Hilton Head S.C. routed through Charleston is illustrated in Harrison's P.O.W. book. 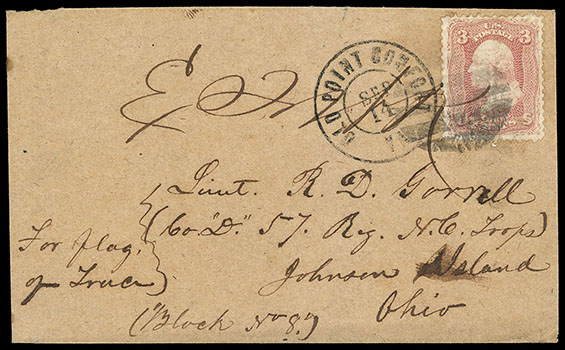 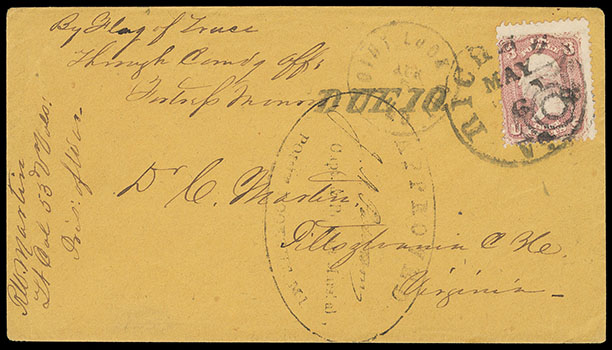 Lt. Col. Rawley White Martin of the 53rd Virginia Volunteers (Armistead's Brigade) was wounded during Pickett's Charge at Gettysburg and was by certain accounts the first man over the wall during that climactic battle, he survived and lived nearly another 50 years.