Thailand to Venezuela including Specialized Uruguay 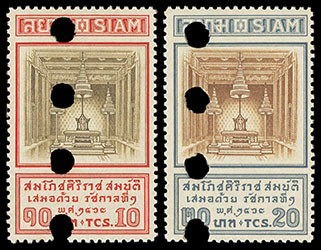 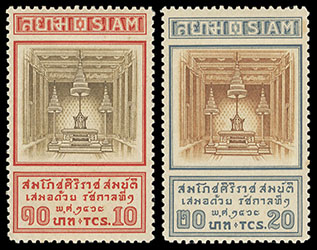 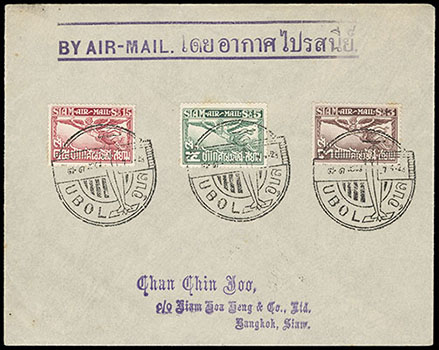 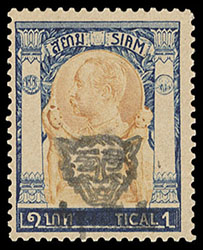 Uruguay, 1856, 80c green, rejoined vertical pair (positions 14 & 19), without gum, margins large to touching frameline at lower left, some slight thinning and hardly apparent soiling, Very Fine appearance, an exceedingly rare rejoined multiple, small quantities of the 80c value were found among the remainders in the late 19th century, these have been subsequently severed into singles, extremely few pairs have been rejoined, ex-Bustamante; with 1993 Holcombe and 2008 C. Rocha certificates.
Scott No. 2    Estimate $5,000 - 7,500. 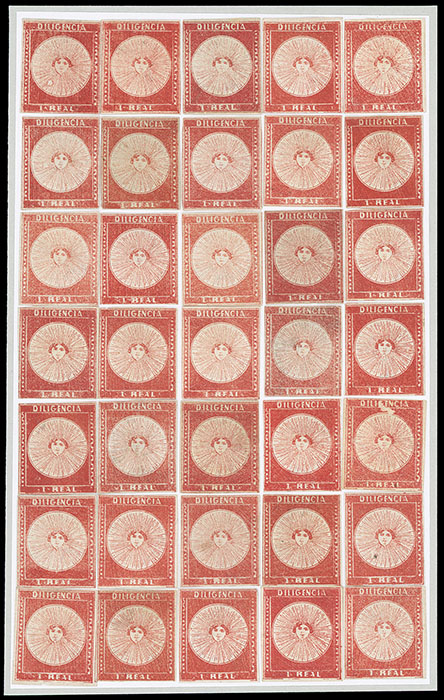 Uruguay, 1856, 1r vermilion to dark red, plate reconstruction of 35, the marvelous complete plate reconstruction of 35 positions, including the different shades known, showing the most prominent plate flaws at positions 1 & 25, as well as ''the big crack'' at positions 20, 27, 28 (the clearest) & 29, being the most prominent common primary characteristic of the three values, also including the secondary characteristics which suggested the theory that the higher value stamps were printed from fresh stones from transfers of the 60c stone, coming from the Bustamante collection, the Sperati forgery has been replaced at position 23, as an optimistic estimation, about three such reconstructions may have been accomplished, this being in outstanding condition, in spite of some stamps with usual thinnings, or repaired in positions 3, 4, 19, 22, mostly three to four margin singles, some small flaws to be excepted, Very Fine, a choice plate reconstruction of these rare and difficult stamp, Scott catalog value for the normal vermilion shade, ex-Bustamante; with 1993 Holcombe and 2008 C. Rocha certificates.
Scott No. 3, 3a, 3b; $14,000+    Estimate $15,000 - 20,000. 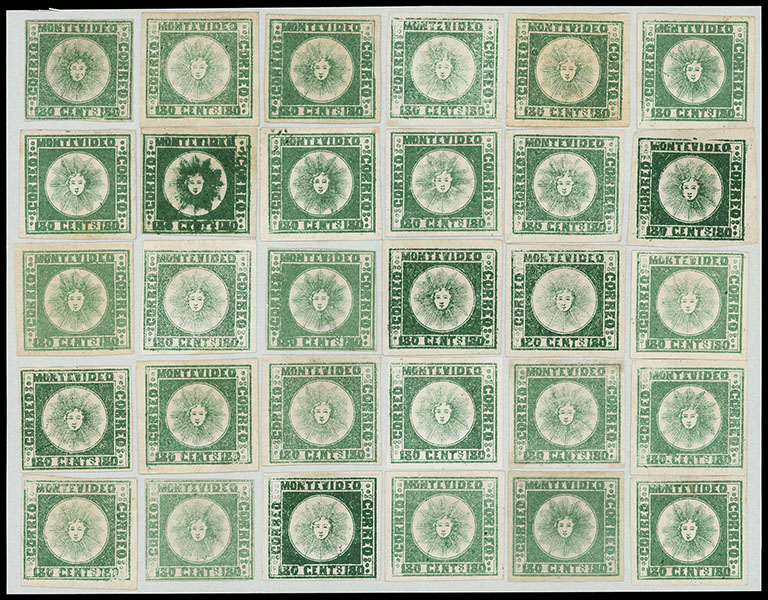 Uruguay, 1858, 180c green, plate reconstruction of 30, reconstructed transfer block, composed of 30 types, including all different existing shades, all with complete to mostly good margins, the stone was composed of repeats of a transfer block of 30, with the bottom rows being a mix of transfers and including one transfer inverted, some stamps show the slight faults usually associated with this issue, most of the copies come from the original reconstruction composed by Hoffmann, margins large to just a few just shaving frameline, few flaws to be expected, Very Fine, a rare plate reconstruction, believed that no more the three reconstructions of this value are known; with 1981 F. Paulos and 2008 C. Rocha certificates.
Scott No. 5, 5a, 5b    Estimate $10,000 - 15,000. 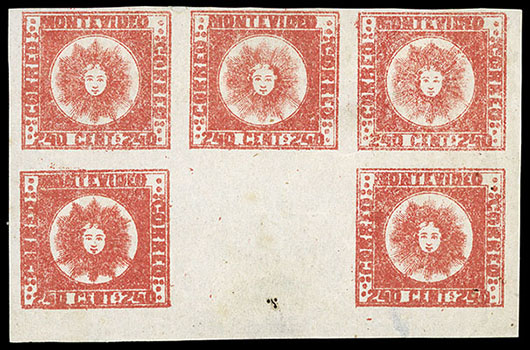 Uruguay, 1858, 240c pale red, bottom margin block of 6 with blank cliché at bottom center, from position 23 in the transfer block of 30 subjects, transfer types 16-17-18 / 22-24, sheet positions 196-197-198 / 202-203-204, wide to large margins on three sides with huge sheet margin at bottom, part of right-hand tablets of two adhesives at right missing and repaired and small thin in bottom margin, in no way detracting from this, without gum, still Very Fine, the only multiple recorded from the bottom right corner of the sheet which includes part of the third and four horizontal rows from the transfer block of 30 that were used at base out of the normal sequence instead of the first and second rows; with 1981 F. Paulos and 2008 C. Rocha certificates.
Scott No. 6e    $5,000+.

THE UNQIUE MARGINAL BLOCK OF THE 1858 240C SUN ISSUE WITH BLANK CLICHÉ SETENANT - ONE OF THE CLASSIC RARITIES OF URUGUAY. 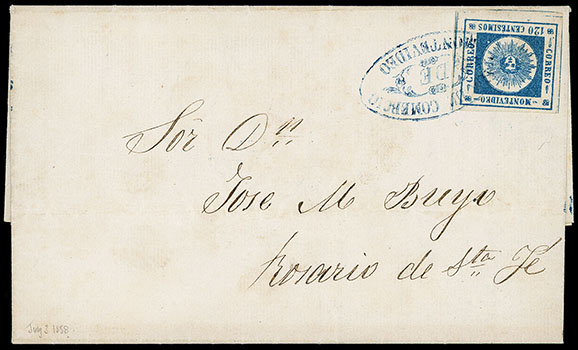 The "Chamber of Commerce" of Montevideo, part from the commercial and maritime services, offered a special postal facility at late hour consisting of handling of restricted merchant correspondence when the state postal offices had already closed; the mail being charged the corresponding postal rate plus a further fee which paid in cash for this service, and was carried between Montevideo and Buenos Aires by the ferry trips under merchant control, with only nominal post office involvement or sanction. In this example, the cover was very probably transferred to the post at Buenos Aires for onward transmission to Rosario. (The contents written by the sender -a merchant- mention him to be very busy in that period, which may have influenced in the fact that the cover could not be consigned to the post before closing).