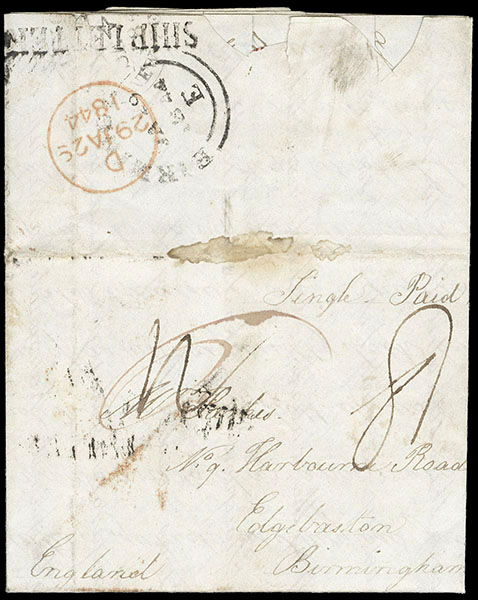 New Zealand, 1843 Wellington, New Zealand to Edgebaston, England, pre-paid folded letter with manuscript "6" and "8" rates totalling "1/2", reverse with light "Wellington, Se 4, 1843" oval origin date stamp, red London and Birmingham cds's and straight line "Ship Letter" handstamp, with lengthy letter datelined "Hawkeshead River, Hutt, N.Z., August 14, 1843" with content regarding the Wairau Affray (Massacre)…"Sometime ago a most dreadful massacre took place at Wairau a river some distance from Cloudy Bay. Captain Wakefield, the N.Z. agent at Nelson had tried to prevail of the chiefs Rangihaeata and Te Rauparatia to sell the land at Wairau, which they would not do, and some time after Mr. Patchat and Mr. Tuckett, surveyors and a party of men were sent to survey the land. These two chiefs burned down the huts and pulled up the staffs…a warrant was issued against the chiefs. Mr. Thompson, the Police Magistrate Captain Wakefield, Captain England and several other gentlemen accompanied them with a small party men. A musket went off by accident. nineteen in all were killed and three missing.", F.-V.F.
Estimate    $200 - 300. 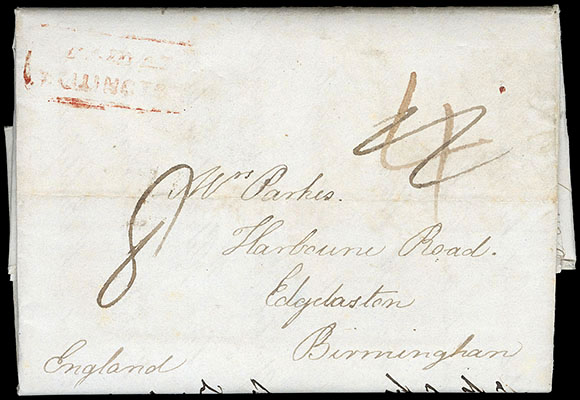 New Zealand, River Hutt, Oct 20th, 1845, dateline on letter within letter to Birmingham, England, with red boxed "Paid at Wellington" handstamp and manuscript "4" rate crossed out and re-rated "8", reverse with Ship Letter handstamp and receiving postmark, letter with interesting content regarding the Hutt Valley Campaign…Since the flight in the Bay Islands, fortifications have been erected and the settlers been drilled and there are three men of war and seven hundred soldiers in the North Island…There has been a very strong stockade built up at the Hutt, when it was finished 50 soldiers…were marched up to it in the middle of the night…two big guns at each corner…with plenty of loop holes for musqetry.; includes for other later letters from correspondence, F.-V.F.
Estimate    $300 - 400. 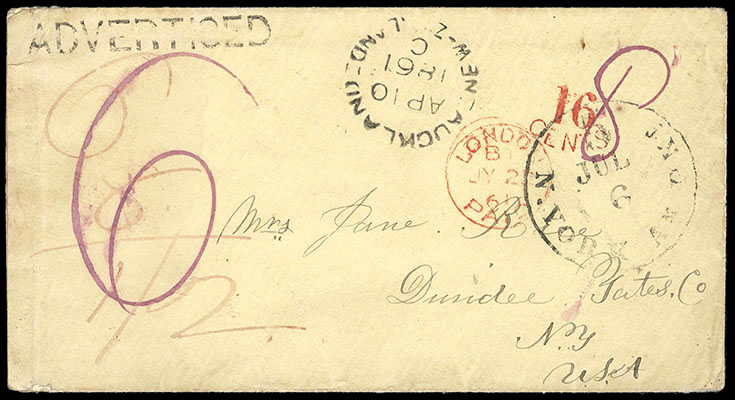