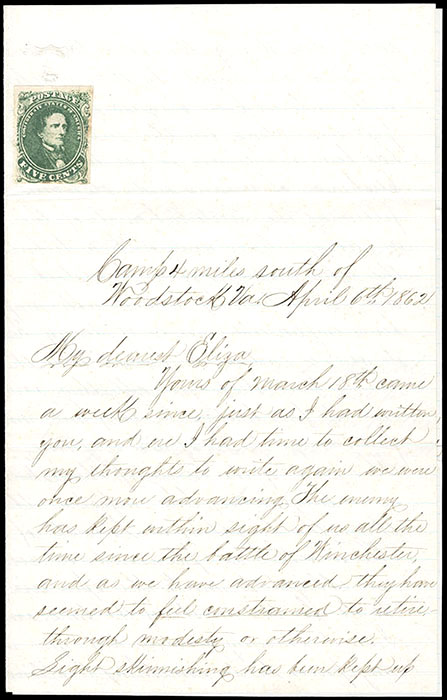 Confederacy, (Military Addresses) "Camp 4 Miles South of Woodstock Va. April 6th 1862", dateline on war content letter with unused CSA 5¢ green (1) affixed at top left, interesting content reads in part "… The enemy has kept within sight of us all the time since the battle of Winchester, and as we have advanced they have seemed to feel constrained to retire through modesty or otherwise. Light skirmishing has been kept up each day during the past two weeks now and then killing a man or two from our midst by their careless shells and we returning the compliment with interest. Our progress is necessarily slow on account of keeping enough provisions along for the sustenance of the troops, and at the same time it has been necessary so far to move slow in order to give time for the accomplishment of certain ends elsewhere. We are now seventy miles from the Potomac following the westerly branch of the Shenandoah, which at this point makes an abrupt turn and with a tributary now forms the dividing line between the Rebel and our forces. Woodstock is the county seat of Shenandoah county and is a town of considerable importance but like most Virginia towns, it bears unpleasant marks of decay. Here the Manassas Gap R. R. follows on in its course, ending a few miles to the south of us. It is of no use to us for the Rebels have destroyed all they could of it in their retreat, by burning several fine bridges. It is of not much loss to us for it does not extend far enough to be of use very long…This part of the valley of the Shenandoah is rich in agriculture but as a large army has infested this region so long, it has been worse than the blight of locusts of old…I send you a specimen of C. S. Postage stamps which is a fair sample in point of execution of the most of their handiwork unaided by the "cursed Yankees."…" with mailing directions of "Co. "A" 39th Regt. Ill. Vol. 2nd Brigade, Shields Division, Washington, D. C.", accompanied by original mailing envelope addressed to Susquehanna Depot Pa. with stamp cut off and partial Banks Division cds, a Very Fine Civil War letter with wonderful wartime content.
Estimate    $300 - 400. 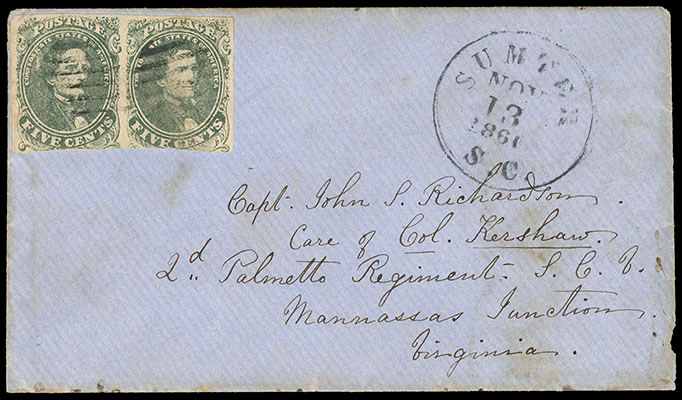 Joseph Brevard Kershaw served one year in the Mexican American War as a Lieut. of the Palmetto Regiment. Following secession, he entered the Civil War as Colonel of the 2nd South Carolina, present on Morris Island during the bombardment of Fort Sumter and at First Manassas. He was promoted to Brigadier General on Feb. 13, 1862 and Major General on May 18, 1864. Kershaw played a gallant and distinguished part in all operations of the 1st Corps from Manassas to Appomattox. 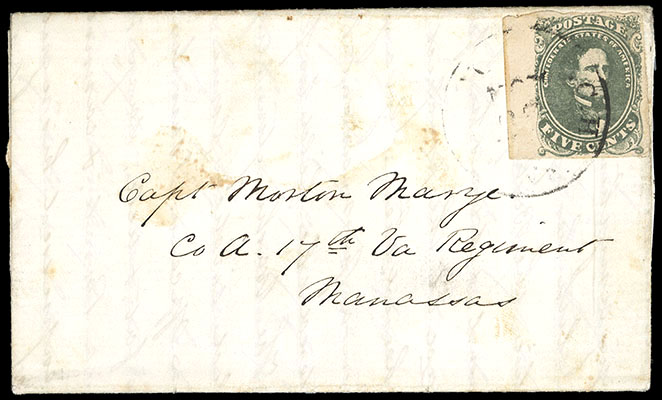 Confederacy, (Military Addresses) "Capt. Morton Marye, Co A 17th Va Regiment, Manassas", address on folded letter datelined "Hawthorne. Nov 17th 1861" and bearing 5¢ green (1) left sheet margin single, margins all around, tied by partial town cds, some interesting content "…I was so greatly disappointed at receiving no letter from you last night & when I read in the "Enquirer" that a battle was expected at Manassas … The Washington neighborhood is filled with invalid soldiers, some of them I hear very elegant Southern officers…"; light stain, Very Fine, ex-Myerson.
Estimate    $300 - 400.

Morton Marye enlisted April 17, 861 at Alexandria Va. as a Private commissioned into Company A of the Virginia 17th Infantry. He was listed as POW and exchanged August 27, 1862, only to be wounded Aug. 30th 2nd Manassas Va. with left leg amputated and disabled. He was promoted to Lt. Colonel Apr. 27th 1862 and Colonel Nov. 1st 1862. 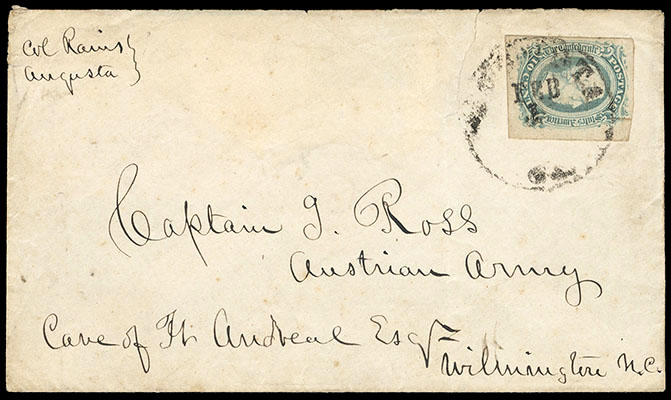 Fitzgerald Ross was a European military observer who was a captain in the Austrian Hussars and toured the CSA during the war. Ross was English born but educated at the Universities of Heidelberg and Gottingen. He entered the U. S. through Canada and followed a complicated route to the Confederate lines. Capt. Ross gives a revealing account of the South in his book "Cities and Camps of the Confederate States".

Col. George Washington Rains enlisted as a Lieutenant Colonel in the Confederate Artillery and was responsible for quipping powder mills at Augusta Ga. These mills produced 2,750,000 pounds of gunpowder for the Confederacy during the war years. He was placed in charge of all munitions production in Augusta in April 1862. 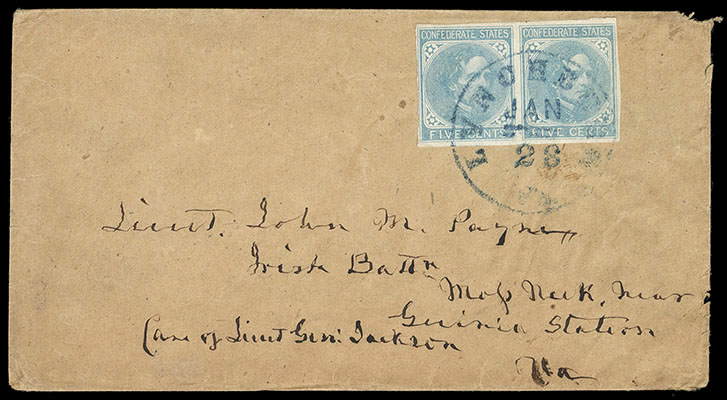 Guinea was the site of a Civil War era railroad station on the Richmond, Fredericksburg and Potomac Railroad known as Guiney's Station. About four thousand captured Union soldiers were collected at Guiney's station after the Battle of Chancellorsville. General Robert E. Lee ordered the wounded General Stonewall Jackson to be taken away from the field hospital at the front lines near Chancellorsville to a safer location at Guiney's Station. The location is notable as being the place where Jackson died on May 10, 1863. His remains were placed on a one-car train at Guiney's Station on the morning of May 11 for transport to Richmond.

Capt. John Meem Payne was born in Lynchburg on Nov. 11, 1840 and was educated at the University of Virginia. From Apr. 17, 1861 to May 4, 1865, he was in the Confederate military entered service as 1st Lieutenant of Company C, Iris Battalion, Second Brigade, Jackson's Division. With this command he was in active service, taking part in all the engagements until after the battle of Fredericksburg. 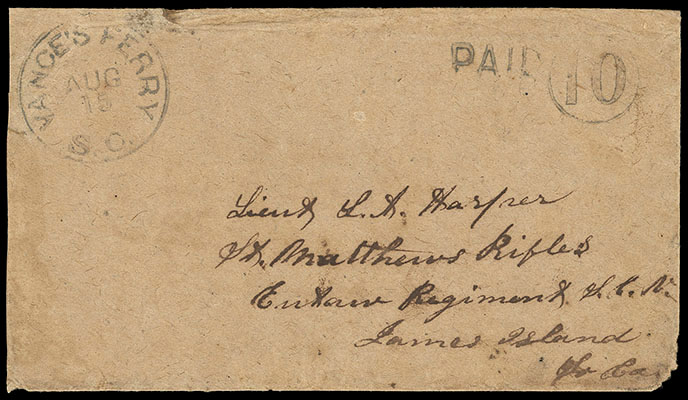 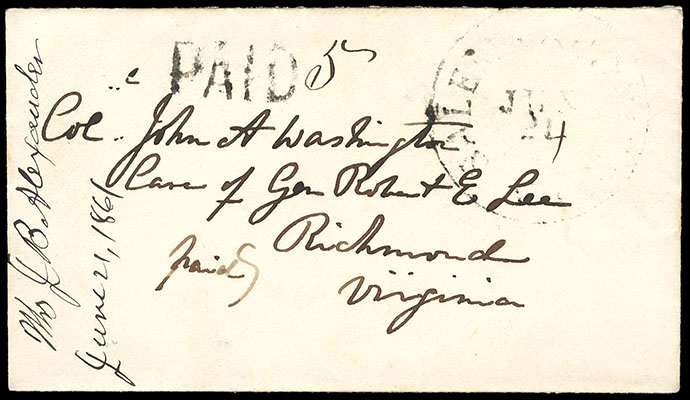 John Augustine Washington III was the great-grand nephew of George Washington and the last private owner of Mount Vernon. John Augustine and his family vacated Mount Vernon for their new home Waveland plantation in February 1860. About a year later, John Augustine joined the Confederate Army as a lieutenant colonel, and he served as aide-de-camp to his relative by marriage, General Robert E. Lee. In September 1861, John Augustine was killed during a reconnaissance mission at the Battle of Cheat Mountain by a Union bushwhacker. In a letter to John's teenage daughter Louisa, Lee painfully informed her that her father "fell in the cause to which he had devoted all his energies, and which his noble heart was earnestly enlisted." The two men had shared many conversations and moments together as tent mates, and Lee admired his unflinching "devotion to Almighty God," assuring Louisa that "He is now safely in Heaven." John Augustine was buried in the Zion Episcopal Churchyard in Charles Town, West Virginia, one of several Washington family members who fought and died for Southern independence. 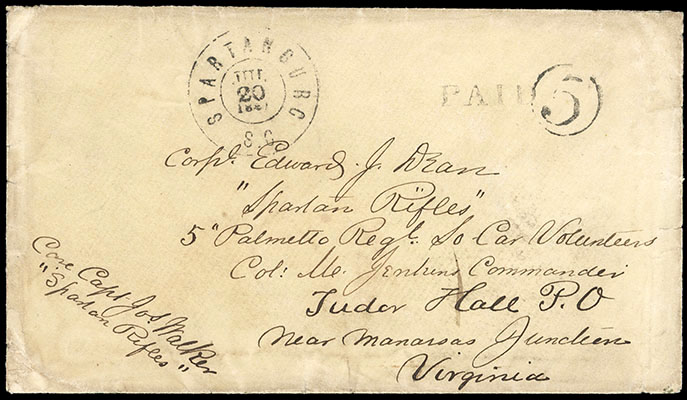 Micah Jenkins graduated from the S.C. Military Academy at the head of the 1854 class, and helped to organize King's Mountain Military School at Yorkville S.C. that he was connected with until 1861. He was elected Colonel of the 5th South Carolina in that year and fought conspicuously at First Manassas. He subsequently formed the Palmetto Sharp-shooters, a regiment made up of transfers from the 2nd, 5th and 9th S.C. Infantry, which he led during the Seven Days. He was promoted to Brig. General on July 22, 1862. He was wounded at second Manassas and served in several campaigns until being struck down by friendly fire on May 6, 1864 during the Battle of the Wilderness. 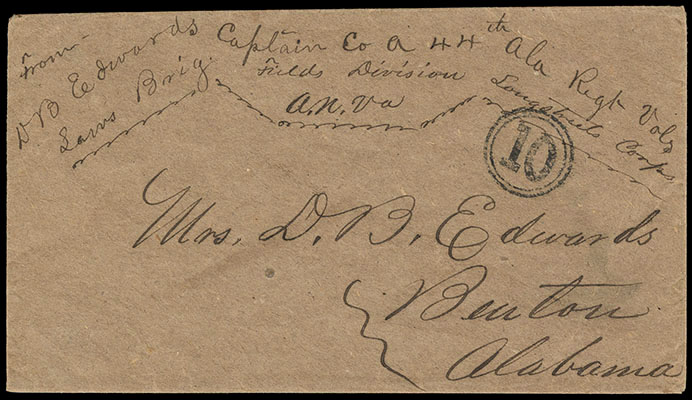 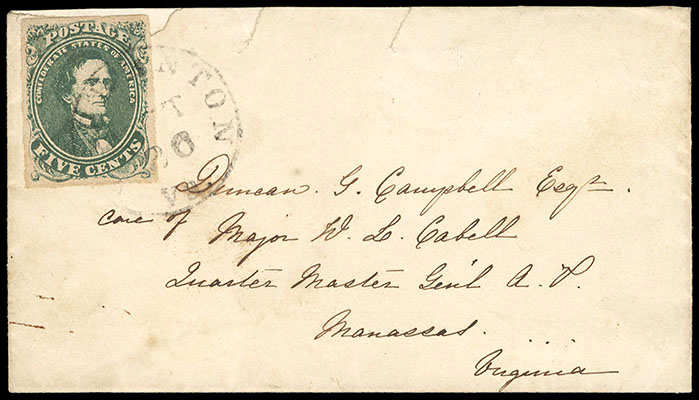 William Lewis Cabel, "Old Tige" graduated from West Point in 1850. His U.S. service was primarily in the Quartermaster General's Office and upon his resignation in 1861, was promptly assigned by the C.S.A. as Major and Chief Quartermaster to General Beauregard at Manassas. He later served on the staff of General J. E. Johnston, at which time he assisted these two officers in designing the Confederate battle flag. Transferred to the Trans-Mississippi under General Van Dorn, Cabell was of great service after the Battle of Elkhorn, when he ferried the latter's entire command to the eastern bank of the Mississippi River. Later, he was appointed brigadier general to rank from January 20, 1863. While in command of a brigade of cavalry under General Sterling Price, he was captured on a raid into Missouri in October 1864, not being released until August 1865.