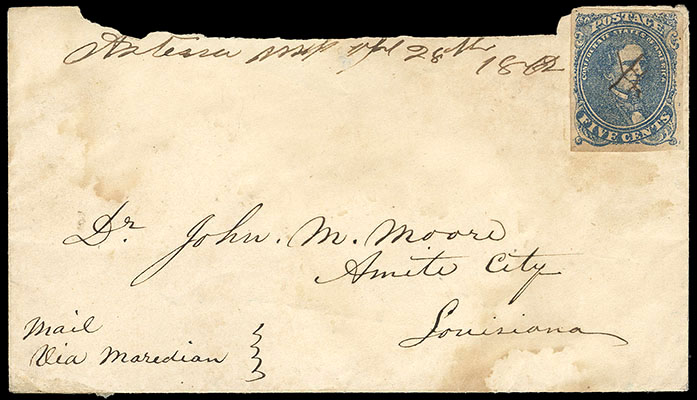 Confederacy, "Artesia Miss. Apl 28th 1862", manuscript postmark and cross-hatch cancel on 5¢ blue (4), four margins, on cover to Amite City La., enclosed letter datelined "Choctaw Agency Miss." with some interesting content "…I will remain here a few days & return to Rienzi in hopes to follow John Morgan back to Tennessee he now commands 4400 Cavelre & is ordered back through Middle Tennessee…I notice in yesterday's papers that the gun boats had passed Ft. Jackson. Should New Orleans fall into the hands of Yankies & they should attempt to advance up the R.R. you can look out & be governed by circumstances & if you find it necisary-removed the Negros to some sicure position…"; cover reduced at top, letter separations, Fine and scarce use.
Estimate    $200 - 300. 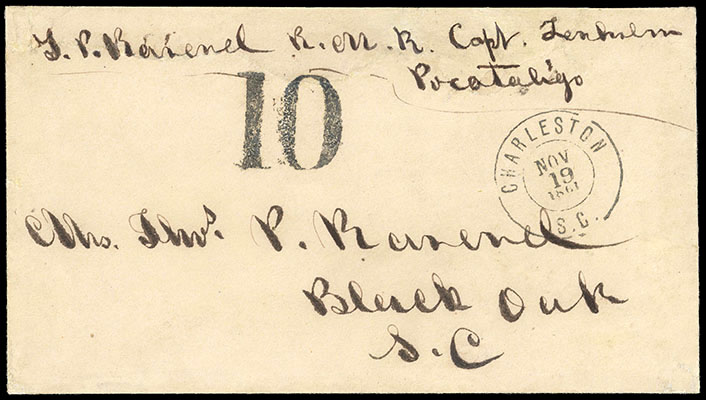 Confederacy, Charleston S.C. Nov. 19, 1861, neat strike of double-circle datestamp and large "10" due handstamp on light buff cover to Black Oak S.C., soldier's endorsement at top, repaired at top with some re-inking of endorsement and rate marking, no flap, Fine appearance, carried privately from Pocotaglio to the mails in Charleston where charged double the 5¢ rate, ex-Calhoun.
Estimate    $150 - 200. 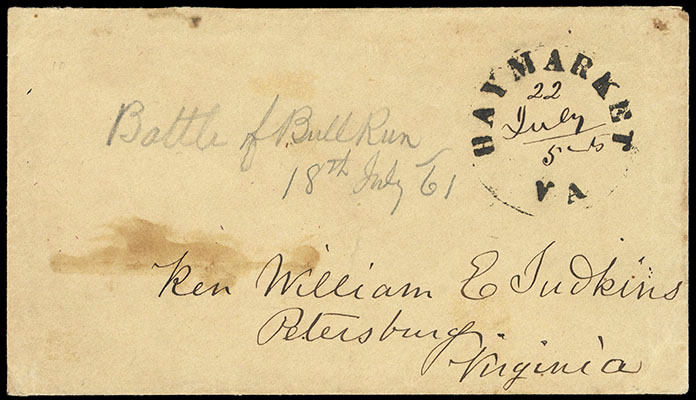 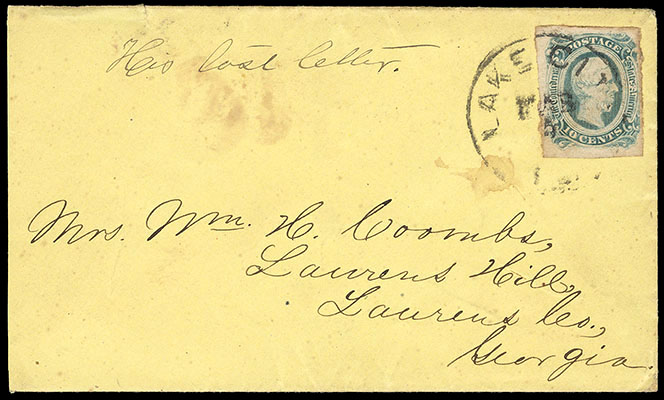 The sender was William H. Coombs who enlisted as a Private on May 7, 1862 into Company I of Ga. 6th Infantry. He was killed in the only major battle in Florida at Ocean Pond on February 20th 1864. 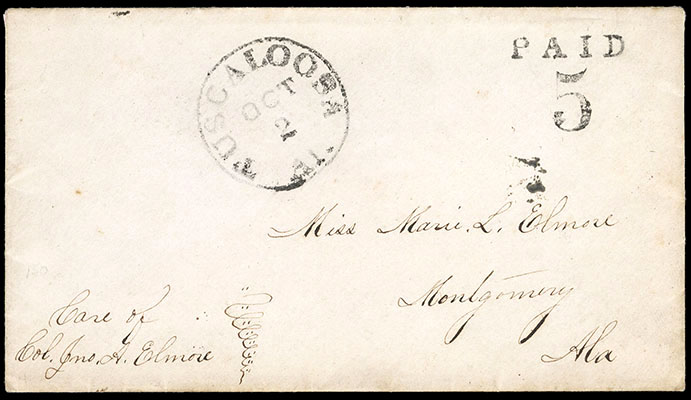 Confederacy, Tuscaloosa Ala., Oct 2, cds with matching "Paid 5" rating handstamp on cover to Montgomery Ala., endorsed "Care of Col. Kno. A. Elmore" at bottom left, original enclosed letter datelined "Camp Beauregard Sept. 29th 1861" with some good content "…Tell him if he does not get the office, to be sure to join either the "Independent Rifles" or "Antanga Rifles."…We heard glorious news today, if so, from Missouri. General Price has taken Lexington with 5,000 prisoners together with all their arms, ammunition, etc. besides $250,000 in specie…We do not get news here until three days after you get it in Montgomery, for all we hear comes from Montgomery, and so you need not expect any war news from me or anyone else from this section of the country. But I believe honestly that Tuscaloosa is the prettiest place I ever laid my eyes on…The Cadets are almost crazy to be ordered down on the coast this winter. I think our chances are pretty good to be ordered to Mobile, for I believe it is generally thought that Mobile will be attacked this winter. If so, our chances are splendid, and I cannot help almost wishing (excuse me) that it would be attacked. Then wouldn't the Cadets make their mark. We are learning to drill very fast…We are State Troops and are held subject to the orders of the Governor. We are enlisted for twelve months and every fellow before he is a Cadet, is compelled to sign a pledge to remain here one year…", Very Fine with some interesting content.
Estimate    $300 - 400.