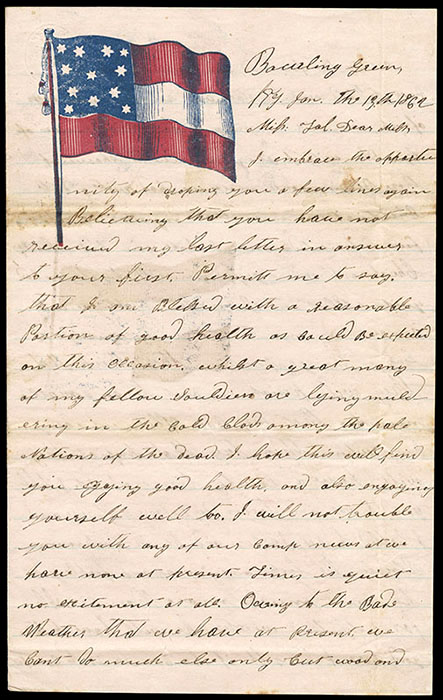 Confederacy, 12-Star Flag Lettersheet, red and blue flag patriotic design on rose lettersheet datelined "Bowling Green Ky., Jan. the 19th 1862", some interesting content "…I am blessed with a reasonable position of good health as could be expected on this occasion whilst a great many of my fellow soldiers are lying mouldering in the cold clods among the pale nations of the dead … We had quite a dull Christmas. No more than any other day, only a few intoxicated men. I hope you have a lively Christmas and enjoyed yourself finely. We had quite a sleet and snow last night. We will remain in our tents as winter quarters as long as the Yankees can. They think that they will perish us out to so small a number that they can whip us easy, but when they try that prospect, they will have a lively time of it, I tell you…" and signed Wm. M. Puryear; light tone spot, Very Fine.
C.S.A. Catalog No. F12-4    Estimate $500 - 750.

William M. Puryear enlisted on September 1, 1861 as a Private mustering into Company H of the Tenn. 26th Infantry. 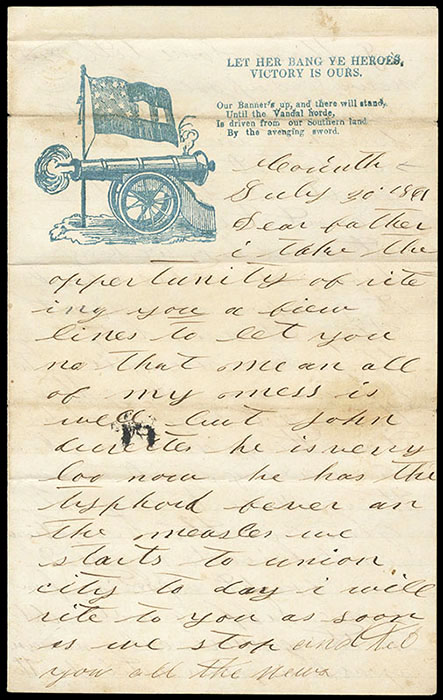 Confederacy, Cannon and 11-Star Flag Lettersheet, blue design with "Let Her Bang Ye Heroes, victory is Ours" verse on lettersheet datelined "Corinth, July 30, 1861." with two letters signed by Thomas W. Deese, one to his father reading "…I have some little war news. I suppose there has been a great battle fought in Virginia and that we won a great victory there. I can't tell you how it was for we hear different tales about it. I suppose we will not stay at Union City long. They say we will go to Missouri near Cairo, though there is not any certainty how things will work in wars…" and to Thomas "…I will write you a few lines to inform you that I am on the land and among the living. I have no more than is all ready noted. I would much rather be in old Neshoba than in the Army, if it wasn't that I think I may get to crack a Yankee's head. We had a false alarm here night before last. It was to try the men and to see how soon they could form in line of Battle. I think the whole Regiment was in line in three minutes…"; light fold toning, Very Fine, ex-Brandon.
C.S.A. Catalog No. CN-1B    Estimate $500 - 750. 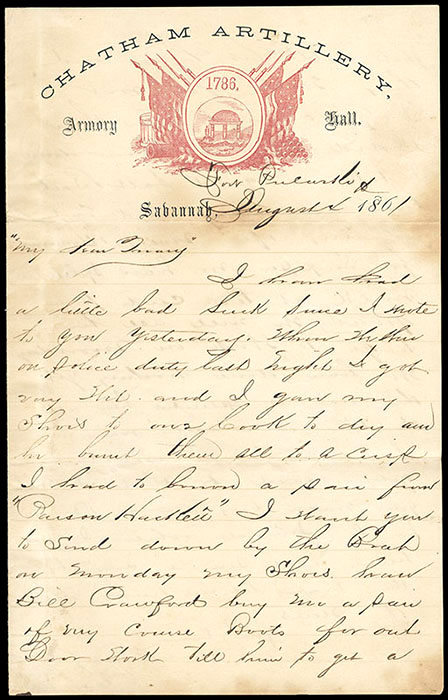 A RARE EXAMPLE OF THE "CHATHAM ARTILLERY" PATRIOTIC LETTERSHEET. 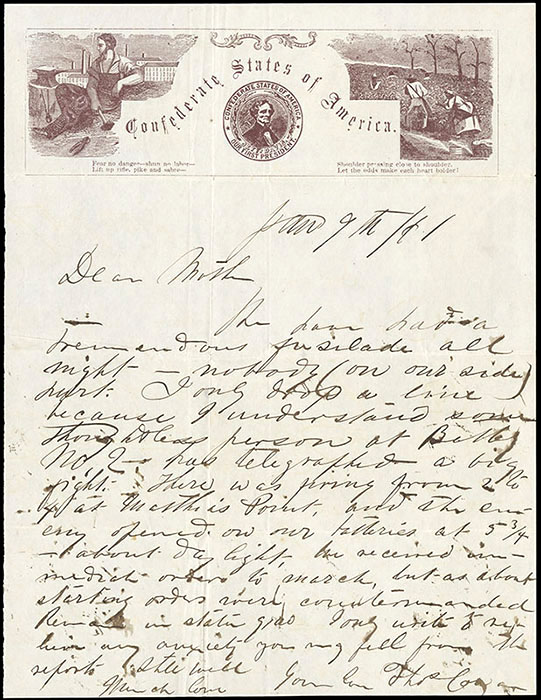 Confederacy, Jefferson Davis Medallion C.S.A. Lettersheet, brown patriotic design showing blacksmith and crop picking scenes, dated "Jany 9th/61" to his mother reading "…We have had a tremendous fusillade all night. Nobody (on our side) hurt. I only drop a line because I understand some thoughtless person at Battery No. 2 has telegraphed a big fight. There was firing from 2 to 4 at Mathias Point, and the enemy opened on our Batteries at 5 3/4, about daylight. We received immediate orders to march, but about starting, orders were countermanded. Remain in status quo. I only write to relieve any anxiety you may feel from the reports. Still well…" and signed by Thomas Crown; some light folds and wrinkling, Very Fine and rare lettersheet with good content.
Estimate    $750 - 1,000. 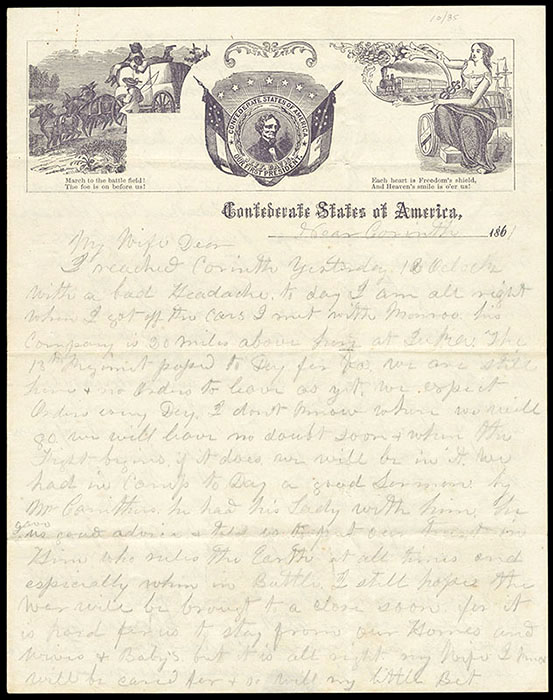 Confederacy, Jefferson Davis Medallion C.S.A. Lettersheet, purple medallion design with 7-Star Flags at sides and additional "March to the battle field!" and Lady with train and ship vignettes, lettersheet datelined "Near Corinth 1861", some interesting content "…The 13th Regiment passed today for Va. We are still here & no orders to leave as yet. We expect orders any day. I don't know when we will go. We will have no doubt soon & when the fight begins, if it does, we will be in it…I still hope the war will be brought to a close soon, for it is hard for us to stay from our homes and wives & babies, but it is all right…We have no very reliable news here about the fighting. I have just heard that a fight come off in Manassas & old Ben McCullough got the Federal Troops down. We lost 75 men & four thousand of the enemy killed, wounded, & taken prisoners, with all their ammunition & arms, etc. so report has it…The Northern Congress seems state minded to smash us up if they can. Better reason will may be taking the place of folly & nonsense…", Very Fine and rare patriotic lettersheet.
Estimate    $500 - 750. 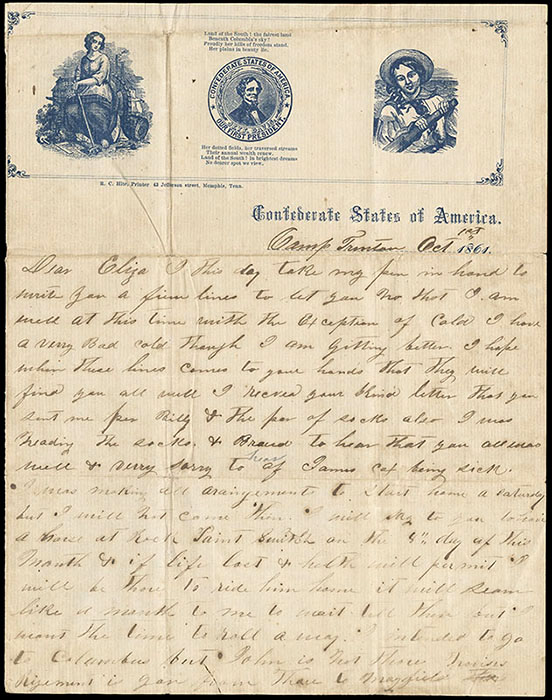 Confederacy, Jefferson Davis Medallion C.S.A. Lettersheet, blue design showing lady and sailor vignettes, H.C. Hite imprint, datelined "Camp Trenton Oct 1st 1861" with some interesting content "…Our Col. is drilling us, very like he drills the officers, a day & then we have to drill our company in squads twice a day in the same thing that he drills us once a day in. I think that if we live through the campaign that I will be tolerable well drilled. I have got Willy a little hot, ready to bring him when I come home. Well, Eliz, I am well pleased with our Col. He is one of the rite kind of men…He is gone home to Memphis to get our guns. We will draw the best rifles that there is, so they say…But if God will spare my life till the war is ended & I get back to live with you, I think that if there ever was a happy man, it will be me, but if it should be my lot to fall in the field of Battle, that I may fall in honor…"; files folds and wrinkling, light toning, Fine and rare lettersheet with some interesting war content.
Estimate    $400 - 600. 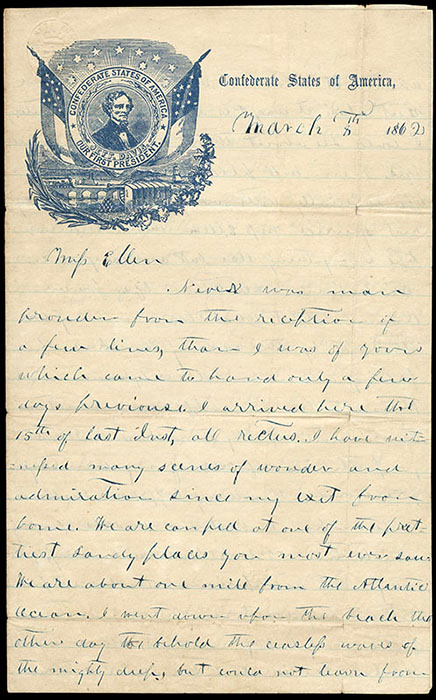 Confederacy, Jefferson Davis Medallion C.S.A. Lettersheet, blue medallion patriotic lettersheet dated "March 5, 1862", and some interesting content reading in part "…I have witnessed many scenes of wonder and admiration since my exit from home. We are camped at one of the prettiest, lovely places you most ever saw. We are about one mile from the Atlantic Ocean. I went down upon the beach the other day to behold the ceaseless waves of the mighty deep, but could not learn from whence it came nor where it was bound…We live an uncertain life for we know not at what hour we may be attacked by the enemy. The idea of facing a cannon ball is by no means pleasant. One man's life is no sweeter than another. Why then should I not go forth in defense of my country's freedom…There is no anticipated fight here at present, but if we have to fight, let us fight the war through & return home…"; some light toning, F.-V.F. and scarce patriotic lettersheet.
C.S.A. Catalog No. JD-1C    Estimate $400 - 600. 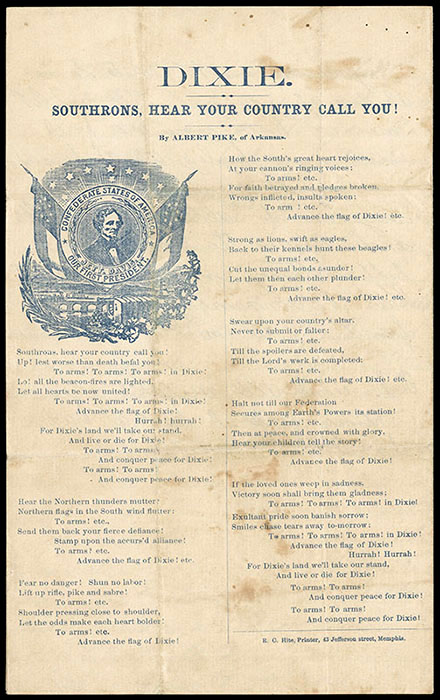 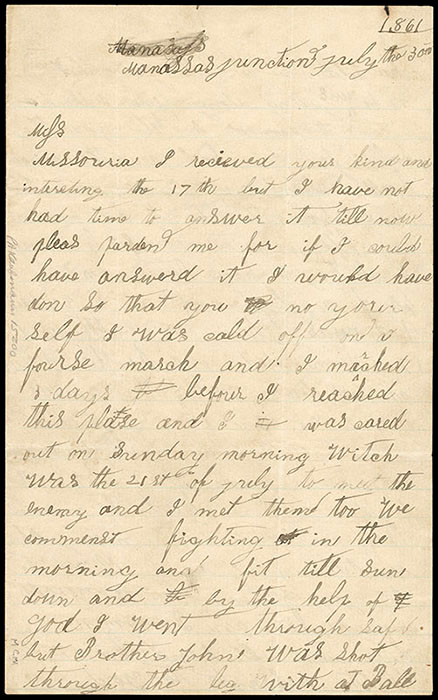 Confederacy, Jefferson Davis Medallion Patriotic Songsheet, blue medallion design song lettersheet with 10-stars in sunburst and flanking 7-star flags (CSA Catalog JD-18) and wonderful song lyrics "Dixie. Southrons, Hear your Country Call You !" By Albert Pike, S.C. Hite imprint, letter datelined "Manassas Junction, July the 30th 1861" with military content reading "…I was called off on a forced march, and I marched 3 days before I reached this place, and I was carried out on Sunday morning which was the 21st of July to meet the enemy and I met them too. We commenced fighting in the morning and fight till sundown and by the help of God, I went through safe, but Brother John was shot through the leg with a ball. He told me to tell you that he was getting along fine. think he is too. I tell you the balls fell like hail and the cannon balls cleared up a new ground. I never saw the like of dead men in my life. I never read of so many in no history. I have to mourn the loss of a Lieutenant and 2 privates that was killed in the battle and 17 wounded, one brother wounded, and 35 down with the measles. Out of 80 men, about 35 able to drill. That is bad…" and signed William D. Pitman; light overall toning and folds, Fine and scarce 7th Georgia Patriotic Lettersheet.
Estimate    $500 - 750. 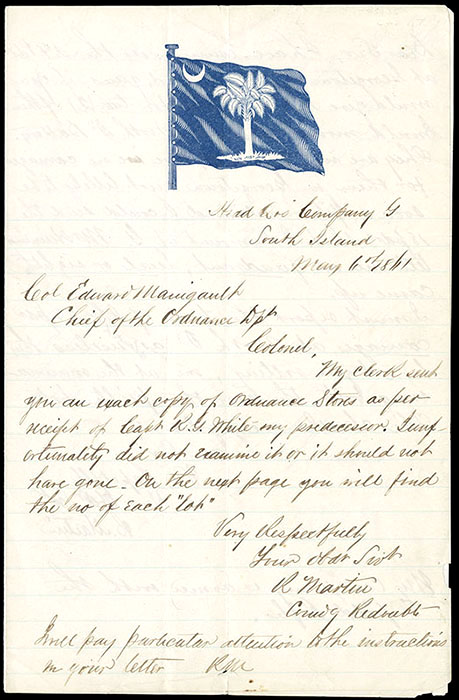 Confederacy, South Carolina Palmetto Flag Lettersheet, blue flag patriotic lettersheet (CSA FSC-3A type) datelined "Head Qrs Company G, South Island, May 6th 1861" from Capt. R. Martin, Commanding Batteries to Col. Edward Manigault, Chief of Ordnance Dept., letter reads "My clerk sent you an exact copy of Ordnance Stores as per receipt of Capt. R. G. White, my predecessor. I unfortunately did not examine it, or it should not have gone. On the next page you will find the no. of each "lot."" with following page giving details, Very Fine and scarce patriotic lettersheet.
Estimate    $400 - 600. 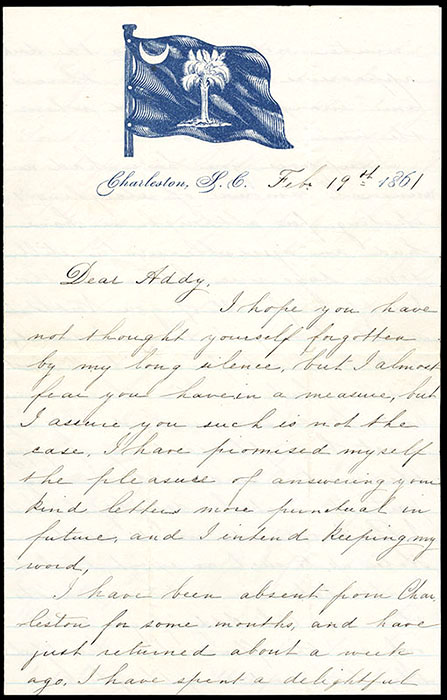 Confederacy, South Carolina Palmetto Flag Lettersheet, blue patriotic flag design on lettersheets with part-printed dateline "Charleston, S.c. Feb 19th 1861" with some interesting content "…I have been absent from Charleston for some months and have just returned about a week ago. I have spent a delightful winter notwithstanding the dark appearance of the times. There is time enough to be sad when the time comes…gentlemen) are going on a maroon. Of course, your humble servant is one of the said party. We go over a bridge which extends over the Ashley river, which said bridge is over a mile across. On one side is Charleston. On the other side is country and the depot of Charleston & Savannah R. R. …I often think of the pleasant times I had on Long Island and revert to them very often… live in the hope of seeing you all again and have just such a time as we had last summer, for politics will make no difference in our private and social circles, and I shall still entertain the same feelings for all with you as I did before…", fresh and Very Fine.
C.S.A. Catalog No. FSC-3A    Estimate $500 - 750.