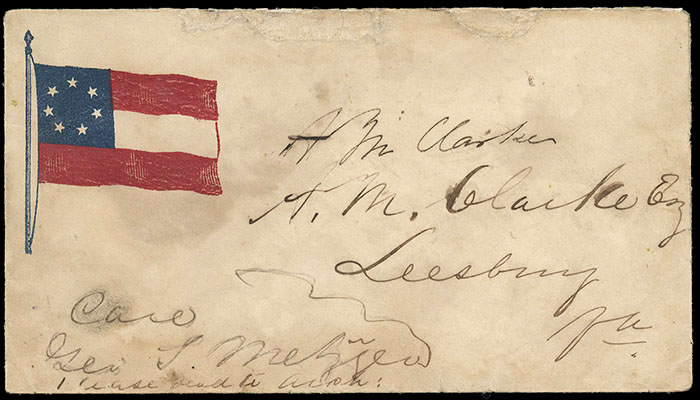 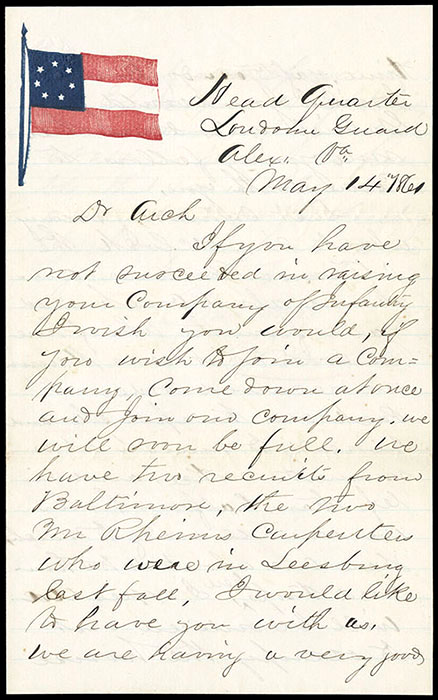 Confederacy, 7-Star Flag, red and blue patriotic design on envelope and matching lettersheet, privately carried envelope addressed to A.M. Clarke in Leesburg Va. endorsed "Care Geo. L. Metsue" at bottom left, repaired edge faults, toning and soiled; lettersheet headed "Head Quarter, Loudoun Guard, Alex. Va., May 14th 1861" with some good content "…Dr. Arch, If you have not succeeded in raising your Company of Infantry, I wish you would, if you wish to join a company, come down at once and join our company. We will soon be full…Last Saturday evening about six o 'clock, the steamer "Pawnee" anchored about one hundred yards from the wharf here. As soon as it was known, we received orders to pack our knapsacks and be ready to march at a moment's notice, and in less than half an hour, we were all ready to march. There are about 4 to 5 hundred troops here. expect we will be ordered out to occupy the house formerly occupied by the Episcopal High School…" and signed A.J. Bradfield, F.-V.F. and scarce matching patriotic stationery.
C.S.A. Catalog No. F7-4    Estimate $500 - 750.

Archibald Means Clarke enlisted June 1st 1861 as a Private mustering into Company K, Virginia 6th Cavalry. He was listed as a P.O.W. Jun. 9th 1863 at Beverly Ford Va. paroled Jun. 25th 1863 at Old Capitol Prison at Washington D.C. He was again listed as P.O.W. Feb. 21st at Leesburg Va. with Oath of Allegiance on Jun. 4th 1865 at Fort Delaware Del. 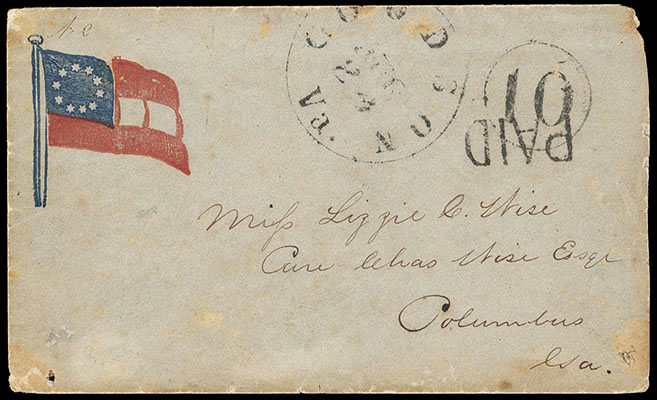 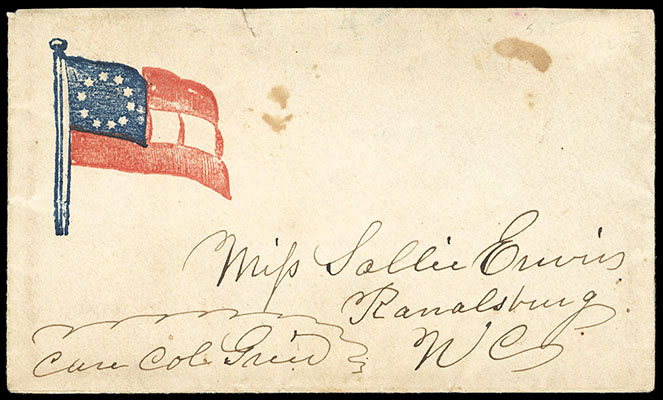 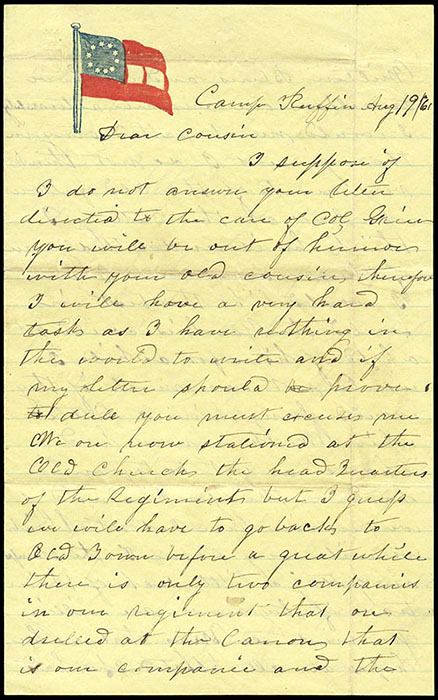 Confederacy, 10-Star Flag, red and blue patriotic design on cover to Ranalsburg N.C. endorsed "Care Col Grier" with matching patriotic lettersheet datelined "Camp Ruffin, Aug 19/61" with some interesting war content "…We are now stationed at the Old Church, the Head Quarters of the Regiment, but I guess we will have to go back to Old Town before a great while. There is only two companies in our Regiment that are drilled at the cannons. That is our company and the Milton Blues and we have to relieve one another alternately. I would much rather stay in the Regiment. I do not think very much of the old fellow who lives at the Battery. I think he is undoubtedly one of the meanest men I ever. I would like the best in world the Yankees could get a hold of him for awhile. I would not care much if they would hang him a little. While we have never had a chance as yet to try our hand on the Yankees, and if we remain here I don't think we will very soon. The scamps are getting a little sick of their trade. If they are, we are willing. You must tell Mag that as her hopes are all blasted, she had better come on and join the Army. This is the very place for disappointed lovers, so come ahead…Sallie, you must be sure to come on you and Miss Alice. You can have the best time in the world. You will be apt to create quite a sensation in camp. I think you, I mean both of you, of course, will compare favorably with any of the young ladies who visit our camp, but we have some fast ones here…"; envelope couple stain spots and tiny edge tear, otherwise Very Fine and scarce matching C.S.A. patriotic stationery.
Estimate    $500 - 750. 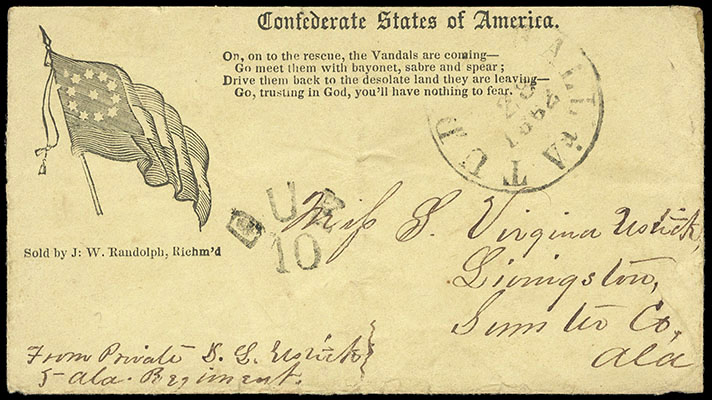 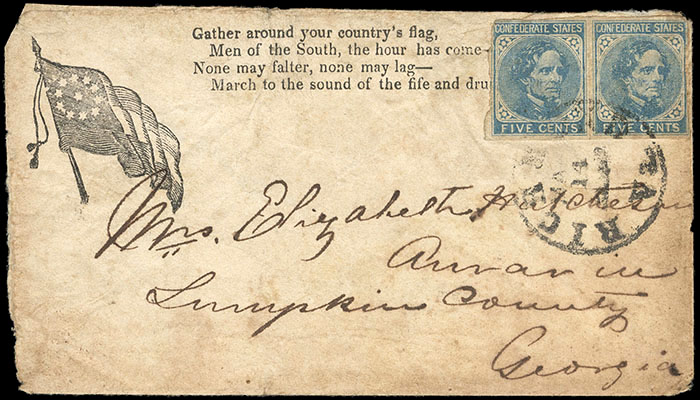 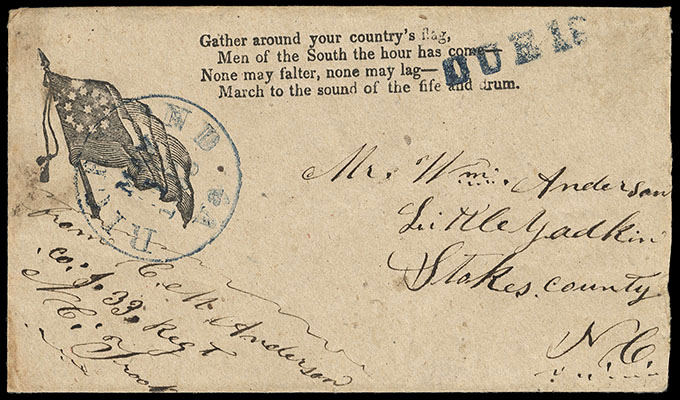 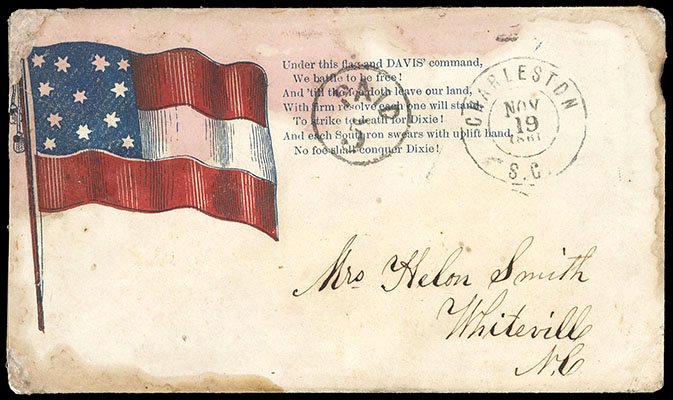 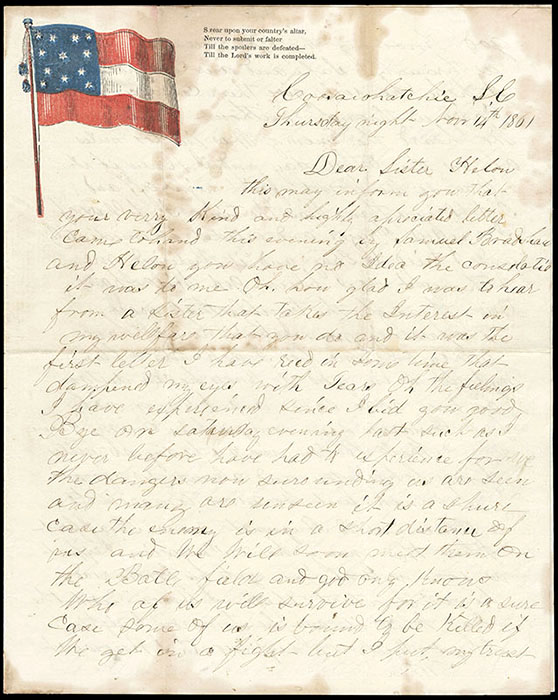 Confederacy, 12-Star Flag, matching red and blue patriotic design on cover and letter, cover with "Charleston S.c., Nov 19, 1861" cds and matching "Paid 5" in circle rating handstamp to Whiteville N.C., lettersheet datelined "Coosawhatchie, S. C. Thursday night Nov. 14th 1861" with some interesting content "…I never before have had to experience for the dangers now surround us are seen and many are unseen. It is a sure case the enemy is in a short distance of us and we will soon meet them on the battlefield, and God only knows who of us will survive for it is a sure case some of us is bound to be killed if we get in a fight, but I put my trust in God knowing he can carry us through safe, and our commanders, I hope he will give them courage to carry us through without excitement. We heard the enemy was in two miles of us the other day, and I knew if it was so we would fight right off … we are today 65 miles from Charleston and about 40 from Savannah, but we move tomorrow to a place called Huguenot near Beaufort where the enemy have possession. I expect as soon as Gen. Lee gets his forces ready, he will attack them. I know not the day when it may be, tomorrow, tonight, next week or next month, I know not when. And I am going to try to be prepared to meet them and to fight like a brave hero intending to be crowned with victory or to die on the battlefield … There is several Regiments stationed near by that will be to our assistance when we engage…" and signed by Bryant A. Young; cover repaired top left, cover and letter stained, Fine and scarce matched flag patriotic stationery.
C.S.A. Catalog No. F12-4    Estimate $300 - 400.

Bryant A. Young enlisted April 23, 1861 at Columbus County N.C. as a Private mustering into Company H of the North Carolina 18th Infantry. He was killed on May 27th 1862 at Hanover Court House Va. 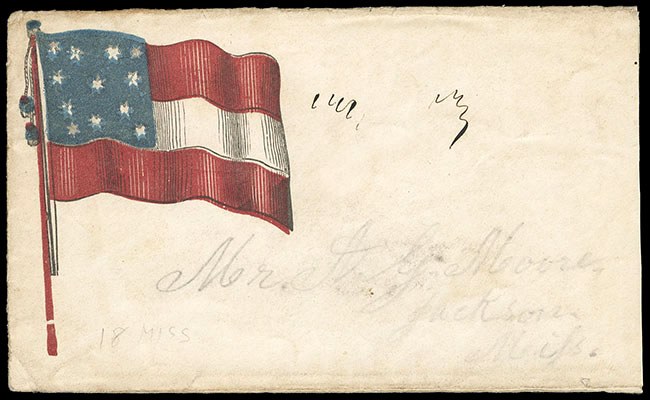 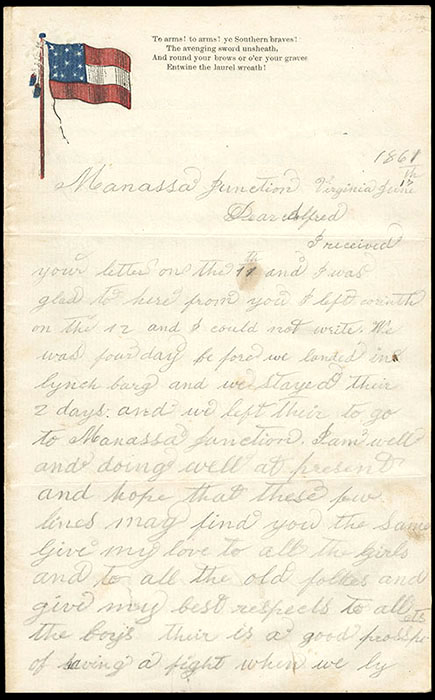 Confederacy, 12-Star Flag, red and blue patriotic design (F12-4) on privately carried cover to Jackson Miss., 12-Star Flag (F12-6) similar patriotic flag design with loose rope hanging free on lettersheet datelined "Manassas Junction Virginia June 17th 1861" and reading in part "We was four days before we landed in Lynchburg and we stayed there 2 days. And we left there to go to Manassas Junction…There is a good prospect of having a fight when we lie down at night. We put our muskets under our head. We are in ten miles of our enemy, and we don't know what minute we may be called on to fight. You must not write to me until I write to you again. We have caught some six or seven spies round about in the woods, and you may know by that there must be some prospects of having a fight. We are in good spirits yet, but I don't know how long we will stay that way…" and signed by W.E. Terrett; cover reduced at right and separated from back, F.-V.F. and scarce 12-Star flag patriotic stationery.
C.S.A. Catalog No. F12-4 var., F12-6    Estimate $500 - 750.

W. E. Terrett was mustered into Capt. E. D. Fontaines Co. of the 18th Regiment Mississippi Volunteers on May 24, 1861 at Corinth, Miss. for 12 months as a private. He survived the battle of First Manassas, July 21, 1861 as his third brigade under D.R. Jones was in defensive positions and not actively engaged, however, in the battle at Leesburg, Va. or Balls Bluff as it is also known on Oct. 21, 1861, W. E. Terrett was one of 36 CSA soldiers killed. His closing statement to his friend Alfred G. Moore that "I remain your friend until death and one day day more" proved prophetic. 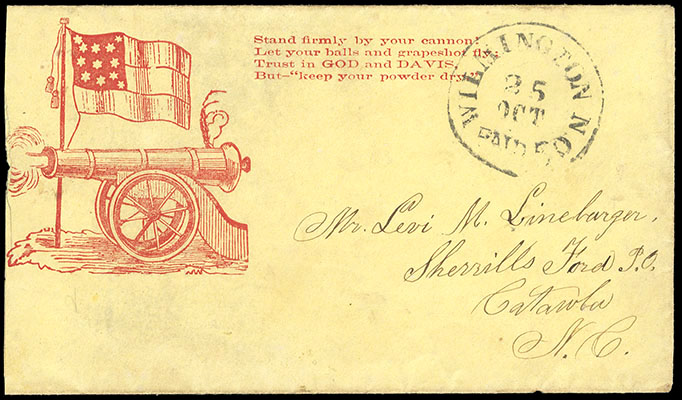 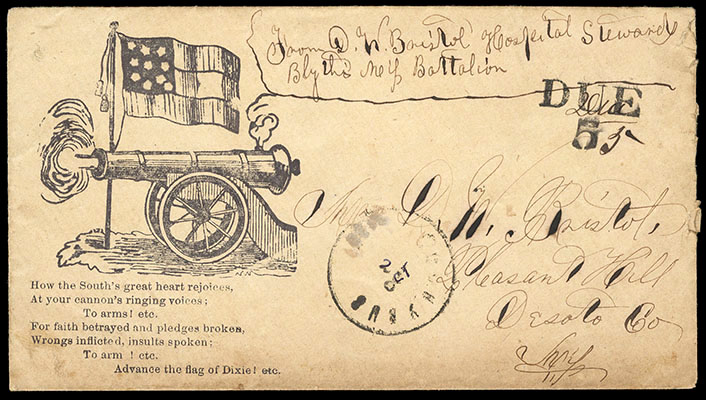