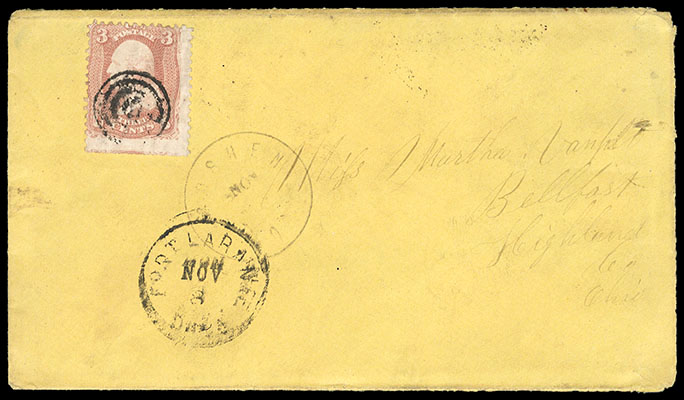 (Forts - Dakota Territory) Fort Laramie, Daka., Nov 8, cds on orange cover with matching target cancel on 3¢ rose (65) s.e. at bottom, to Belfast Oh., Goshen O. transit cds, original enclosed letter datelined "Ft. Laramie, D. Tery., Oct. the 30th 1865" with some excellent content "…I commence my Indian story. We have had a good many fights with them and have escaped so far, yet I do not know when they will run down upon me. If they do, I will give them some Spencer balls before they take my scalp … It has been so long since I saw a white woman, do not know how they look and won't know how to act when once more among them. I think I will be back next summer if nothing happens to me and then I will be to see you … Direct your letter to Ft. Laramie in care of Lieut. S. B. White of Company G, the 11th Regiment O. V. C.", some edge wear, Very Fine with good Indian content, ex-Rosenthal.
Estimate    $400 - 600.

"Fort Bridger U.T. Jan. 30th 1869", two datelined letters from Sgt. Harry Vincent, both with some interesting content "…This is a lonesome place in the Winter…", second letter datelined "Fort Bridger Mar 9th, 1869" begins with personal compliments and gripes over lack of mail due to heavy snow, which delayed trains for about a month, "…I have seen B Young and some of his lovely wives. He has, I believe, sixty five wives in all. I don't think that he would know them all if he would see them together. Ft. Bridger is not a town, and the nearest point to the RR is 8 miles…I have been to the city of Salt Lake…but I don't approve of the style of the Mormons at all, in fact I would find myself very much degraded if found in the company with one…" and "…I have been away on a hunting excursion, had a very pleasant time. There was 15 of us (soldiers) and 5 Indians. There is about 500 Indians camped near the Fort, but they are very peaceable. This is the Sanke Tribe. They are lazy and filthy. accompanied by original cover with 3¢ #65 to Brimfield Mass., reduced into stamp, Very Fine and interesting content concerning Mormons and Indians.
Estimate    $300 - 400. 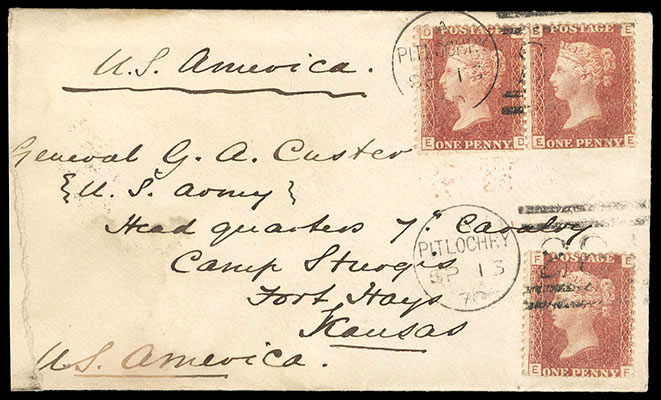