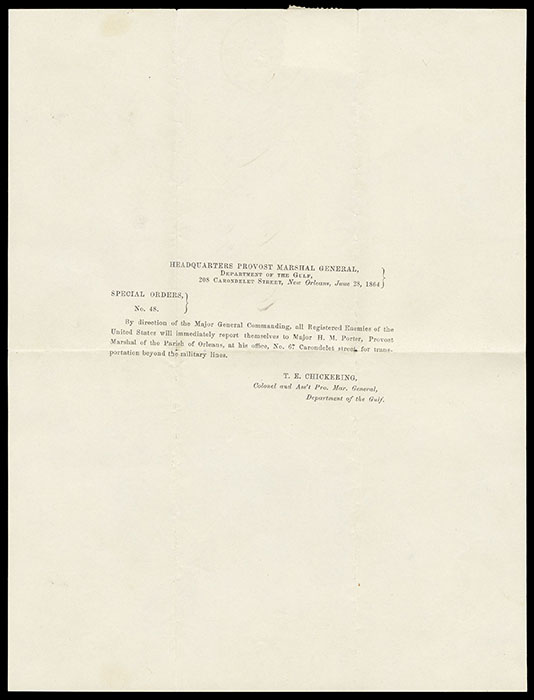 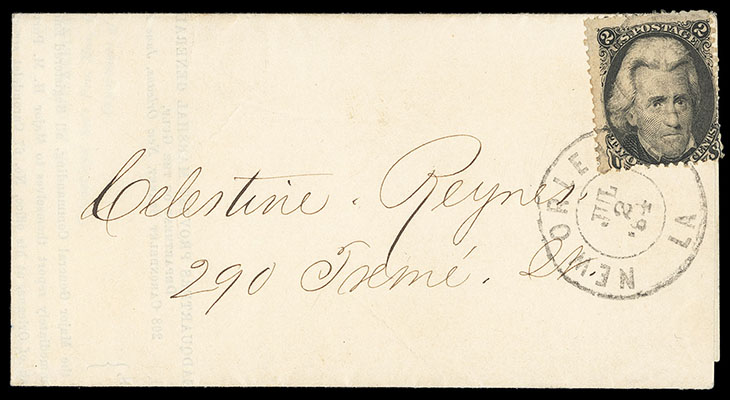 A REMARKABLE ORIGINAL EXAMPLE OF THE 1864 U.S. MILITARY ORDERS FOR EVACUATION OF REGISTERED ENEMIES.

In December 1862, Gen. Nathaniel P. Banks sailed from New York with a large force of raw recruits to replace Maj. Gen. Benjamin Butler at New Orleans, Louisiana, as commander of the Department of the Gulf. He ordered the deportation of all registered enemies of the United States residing in New Orleans (primarily those who refused to take the oath of allegiance). More than 700 families were forced to leave under miserable conditions. By the summer of 1864, the Provost Marshal General estimated that only 778 still remained in New Orleans. Banks ordered that these be deported on June 23 and, but according to the Picayune others were still leaving the Department as late as mid-October 1864. 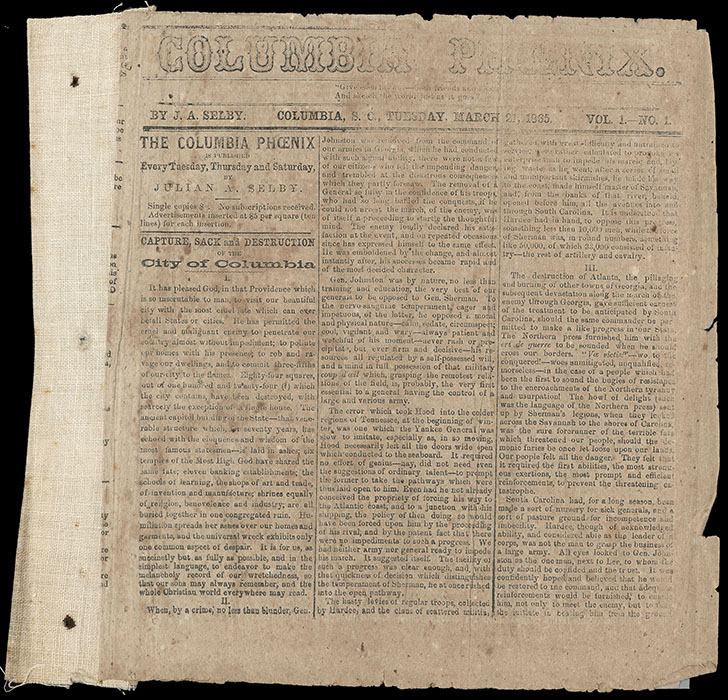 Confederacy, 1865 Columbia Phoenix Newspaper - Printed after Fall of Columbia, group of 7 newspapers comprising: Vol. 1 #1, 3, 4, 5, 6, 7, 9 printed by Julian A. Selby from Mar. 21st to April 8th 1865, 8½" H x 22½" W, includes articles about the capture, sacking, and destruction of the city of Columbia, South Carolina, a list of fire damaged buildings, news from Charlotte and the war's other fronts and the North, affairs in the west, official despatch from General Lee; article "Sherman not a Catholic", reported successes, slaves in our army and recruitment of negroes, abolitionists in Charleston, evacuation of Charleston, Inhospitality and Patriotism, Our Refugeeism, slightly trimmed but readable Mar. 21st: "The Mails - We are Glad to learn from Mr. Heart, Special Agent of the Post Office Department…an arrangement has been made with the Southern Express Company, by which the mails will hereafter be regularly transmitted between the present terminus of the Charlotte Railroad at Blackstocks, by way of this city and Augusta and back twice a week…"; etc.; also includes faulty The Camden Confederate newspaper dated May 2nd 1862, overall good condition with some edge faults, foxing spots, toning, areas of dampstaining, Fine and rare assemblage.
Estimate    $2,000 - 3,000.

The Columbia Phoenix (1865-78) arose out of the charred remains of Columbia, the capital city of South Carolina, in the aftermath of the Civil War to record its losses and bear witness to its gradual recovery. A triweekly newspaper, the Phoenix first appeared on Tuesday, March 21, 1865, mere weeks after fires had razed a third of the city. It struck a defiant tone, declaring, "Our city shall spring, from her ashes, and our Phoenix, we hope and trust, shall announce the glorious rising! God save the state!" For over ten years, it reflected on the hardships (crop failures, the scarcity of goods and money) and hopes (the return of businesses and railroads, voting rights for African Americans) of the residents of Columbia and neighboring communities in the Midlands region of South Carolina. Proprietor Julian A. Selby boasted considerable experience in the newspaper business, having formerly owned the Tri-Weekly South Carolinian (also called Tri-weekly Carolinian and South Carolinian). In establishing the Columbia Phoenix, however, he literally started from scratch. In the weeks immediately following the city's destruction, Selby scoured the state for paper, a press, and printing supplies. He and his assistants fashioned for themselves the things they could not find. He also secured the services of renowned Southern literary critic, novelist, and poet William Gilmore Simms as editor. Living conditions in the capital city were so desperate that, early on, the staff offered to accept food staples such as bacon, eggs, rice, and potatoes as payment in lieu of cash subscriptions. The first ten issues contained a detailed history of the burning of Columbia, which was separately published as Sack and Destruction of the City of Columbia, S.C., in October 1865 (itself edited and republished as A City Laid Waste in 2005). Simms departed after six months, but not before Federal troops had arrested him for criticizing their presence in Columbia. (Credits - University of South Carolina, Columbia, SC). 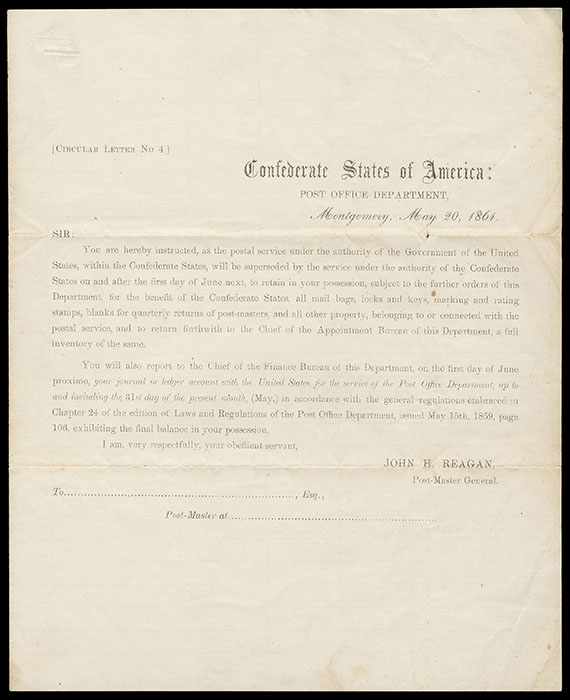 A RARE EXAMPLE OF THE PRINTED POST OFFICE ANNOUNCEMENT OF THE NEW CONFEDERATE STATES POSTAL SYSTEM.

The ideal frontispiece to a Confederate collection. 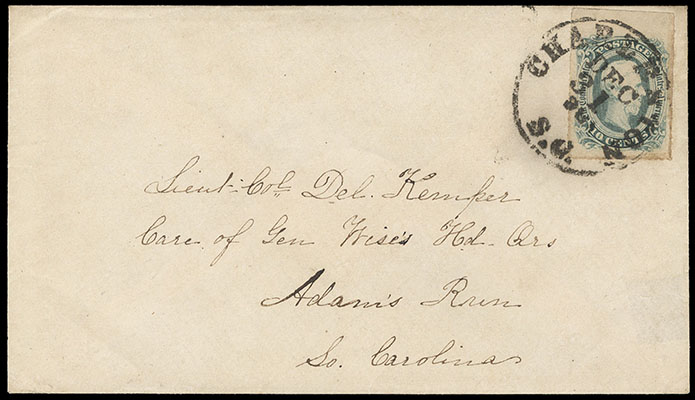 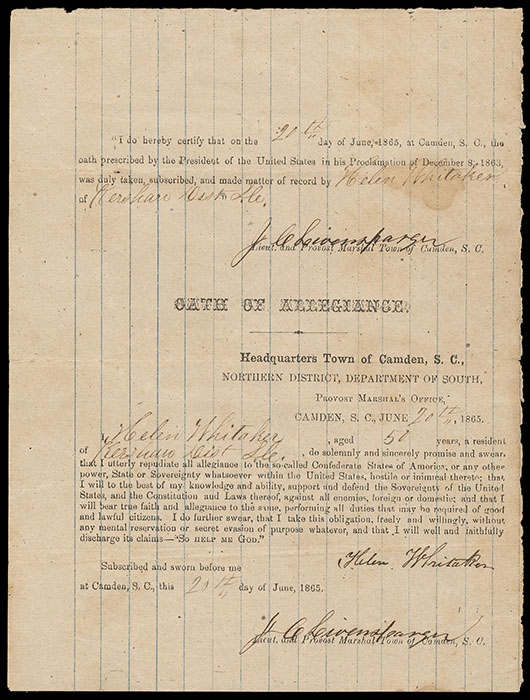 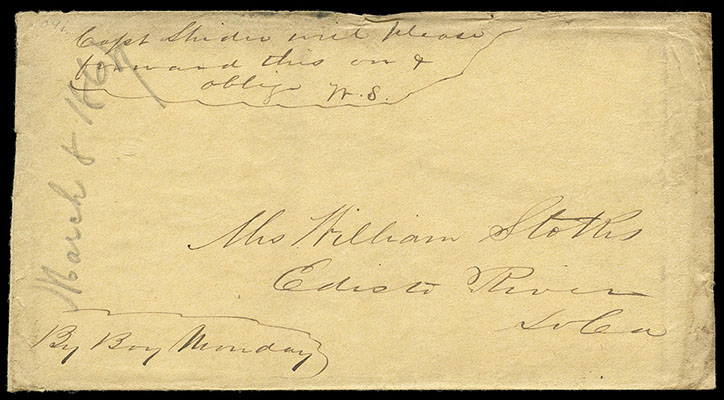