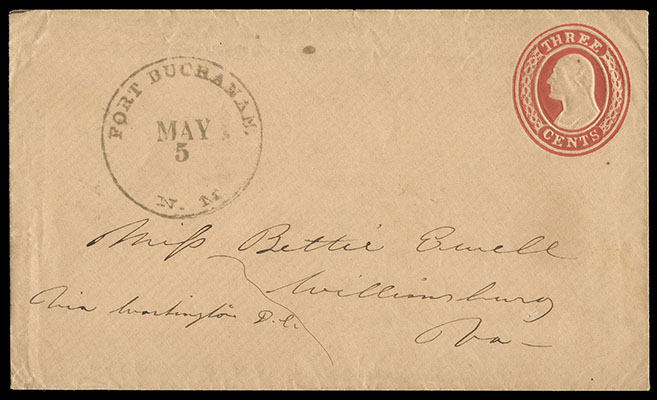 Fort Buchanan N.M. May 5, complete circa 1860 cds on 3¢ red (U10) buff Nesbitt entire addressed in the hand of Captain Richard S. Ewell (commander 1st Dragoons, U.S. Army, later a general in C.S.A. Army), to his niece Elizabeth in Williamsburg, Virginia, endorsed "Via Washington D.C.", carried by Military Express to Tubac, then by Lathrop's Buckboard Mail to Tucson, and from Tucson to St. Louis by Butterfield Overland Mail, docketing note on back "Relating to child captured from Indians", Very Fine and choice, ex-Birkinbine.
Estimate    $2,000 - 3,000.

According to the Siegel Auctions catalogue of the Birkinbine Collection, "The sender of this cover, Captain Richard S. Ewell, arrived in the area of southern Arizona in November 1856 with Major Enoch Steen and the 1st Dragoons. They established Camp Moore in mid-November 1856, which was relocated and renamed Fort Buchanan in mid-1857. This May 1860 cover from Capt. Ewell was carried by military express from Fort Buchanan to the post office at Tubac. It was carried from Tubac to Tucson by S. H. Lathrop, who was under contract to transport mail once a week between the two towns. At Tucson the cover was put on the eastbound Butterfield Overland Mail stage to St. Louis via Fort Smith.

In early 1860 Captain Ewell successfully negotiated the release of eleven-year old Mercedes Sias Quiroz, one of two young women abducted by Pinal Apaches (the other was seriously injured and returned to camp after Mercedes's release). In recognition of his efforts, one of four Arizona territorial counties was named Ewell. In May 1860, around the time this cover was postmarked, he inspected the site where Fort Breckinridge was eventually established to prevent Apache attacks. Before construction of the new fort was completed, Ewell returned east in January 1861 due to recurring malaria infections. The note on back indicates that Ewell's letter contained a report of the recovery of the young hostage. 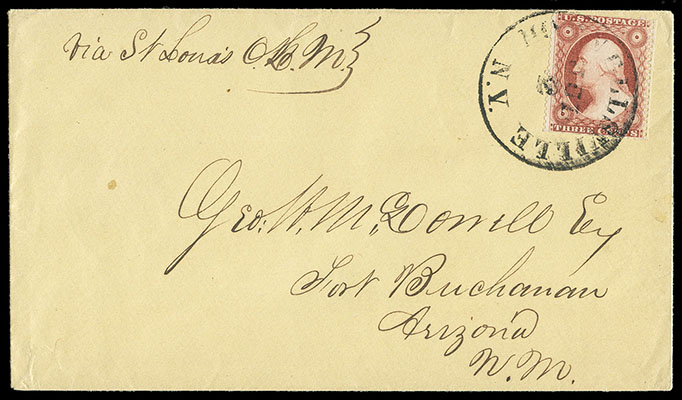 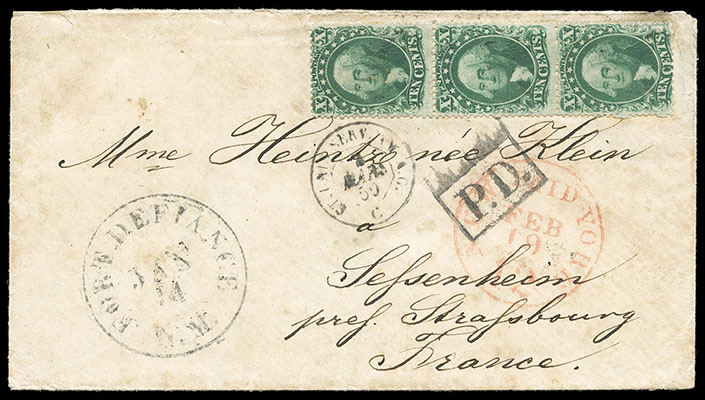 AN EXCEEDINGLY RARE COVER FROM FORT DEFIANCE IN NEW MEXICO TERRITORY TO EUROPE.

Fort Defiance, the first military post in present-day Arizona (then part of New Mexico Territory), was established on September 18, 1851, by Col. Edwin V. Sumner during his campaign against the Navajo. The conflicts with Navajo, generally over use of land for grazing and theft of livestock, escalated into two major attacks - one in 1856 and another in 1860. In 1861, with the start of the Civil War, the U.S. Army abandoned Fort Defiance. It was reestablished as Fort Canby in 1863. The fort did not have a U.S. post office until the appointment of John E. Weber as postmaster on April 9, 1856. The post office was discontinued on October 21, 1863. There was no mail contract for service to and from the fort, so military couriers were used to bring mail to Albuquerque, where it was carried by stage to Santa Fe and from there by the Hall-Hockaday contract mail stage to Independence. 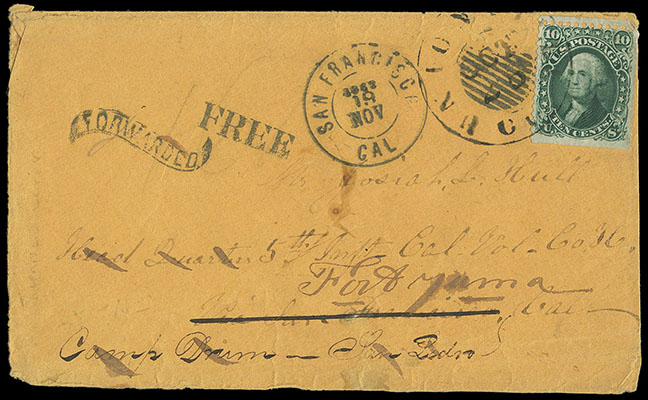 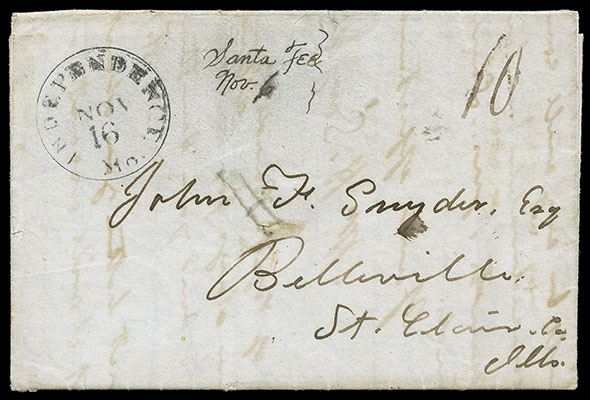 THIS IS THE EARLIEST RECORDED MARKING OF ANY KIND APPLIED AT SANTA FE TO MAIL CARRIED BY MILITARY EXPRESS, WHICH WAS THE ONLY MEANS BY WHICH LETTERS COULD BE SENT TO OR FROM THIS ARMY-OCCUPIED NEW MEXICO TOWN.

After General Stephen W. Kearny occupied Santa Fe on August 18, 1846, a military express was established over the Santa Fe Trail. Mail was carried over this route via Bent's Fort (or the Cimarron Cutoff), and eastbound letters entered the mails at Fort Leavenworth or Independence, Missouri. On May 11, 1850, the contract for monthly mail service on the same route was awarded to Waldo, Hall and Company commencing July 1. Examples of military express mail typically do not have any markings applied at Santa Fe. The "Santa Fee Nov. 6" postmark is dated the day the express departed, two weeks after the letter was written.

This chatty letter between brothers mentions the names of no less than fifteen enlisted soldiers and officers in the 1st and 2nd Regiments of the Illinois Volunteers. Lieutenant Snyder enlisted at Alton, Illinois, on May 26, 1847, and arrived in Santa Fe (Military Territory of New Mexico) on September 16, 1847. He was discharged at Alton on October 14, 1848. 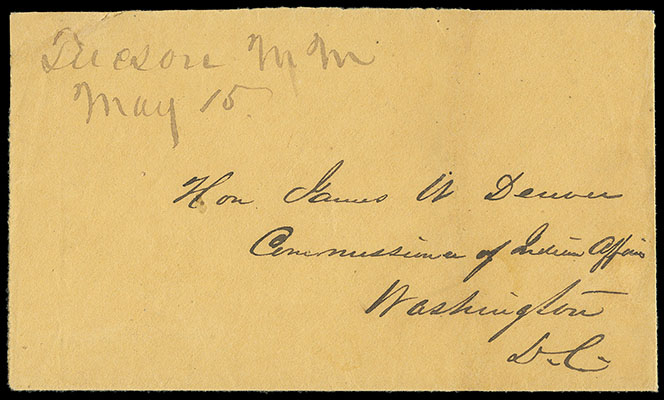 "Tucson NM, May 15.", manuscript postmark by Mark Aldrich on buff cover addressed to General James W. Denver as Commissioner of Indian Affairs (April-June 1857) in Washington, D.C., carried by military express to Santa Fe, instead of entering the regular mails there, it was carried in a military pouch to Washington, D.C., Very Fine, ex-Birkinbine.
Estimate    $3,000 - 4,000.