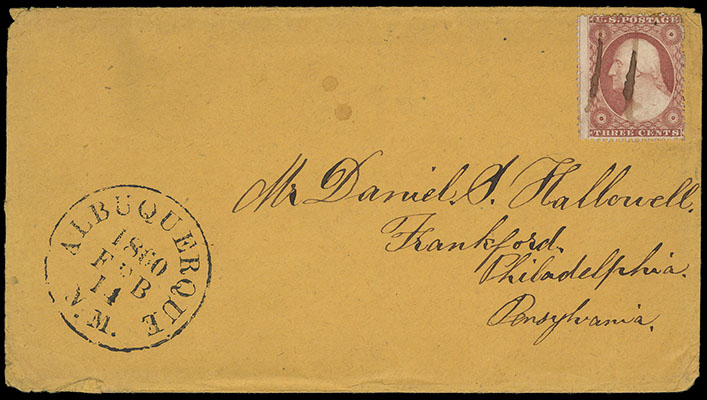 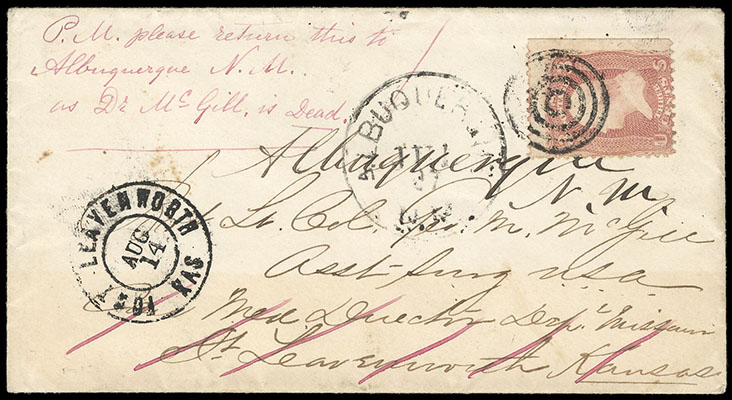 Brevet Colonel George M. McGill, surgeon, was born at Hannah Furnace, Centre Co., Pa., Apr. 20, 1838. He served during the Civil War and later at Fort Leavenworth, Kansas. He received the brevet rank of Colonel in the United States army for faithful services during an outbreak of cholera near Fort Harker, Kansas, and died of the disease en route to New Mexico. 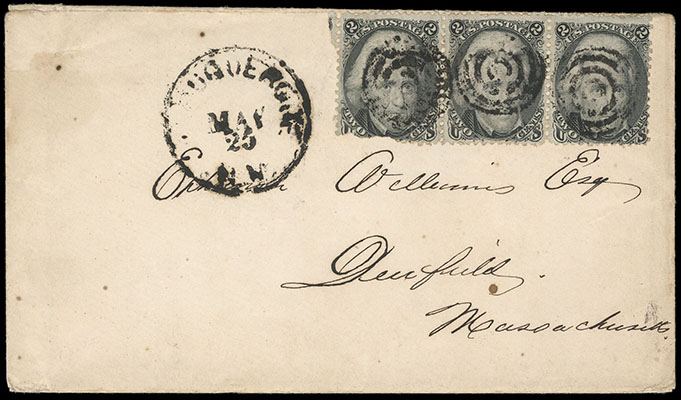 Albuquerque, N.M., May 25, territorial cds with matching four-ring target cancels on 2¢ black (73) horizontal strip of three, center stamp showing slight double transfer at lower right, separation nick in bottom of left stamp, tied through perfs on 1867 cover to Deerfield, Mass., original 1867 enclosure from Ephraim Williams Jr. with interesting content regarding Kit Carson "…General Carson returned to Fort Garland, Colorado, three weeks ago, he has been appointed Indian Agent, which I think he will accept when he is mustered out of his regiment; he is now Lt. Col. of a Battalion of New Mexico Vols. + Bat. Brig Genl. Vols.: I send you his photograph and autograph…", unfortunately no longer with photo, F.-V.F., F.-V.F. and very rare multiple franking, ex-Fosdyke.
Estimate    $750 - 1,000.

A RARE 2¢ BLACK JACK USE FROM NEW MEXICO TERRITORY.

Ephraim Williams Jr. was a soldier in Major Bidwell's Company "K" part of the group known as the New Mexico Volunteers. The Company was stationed in Albuquerque during a period of extreme violence and unrest among the Apache and Comanche Indian tribes on the Great Plains. 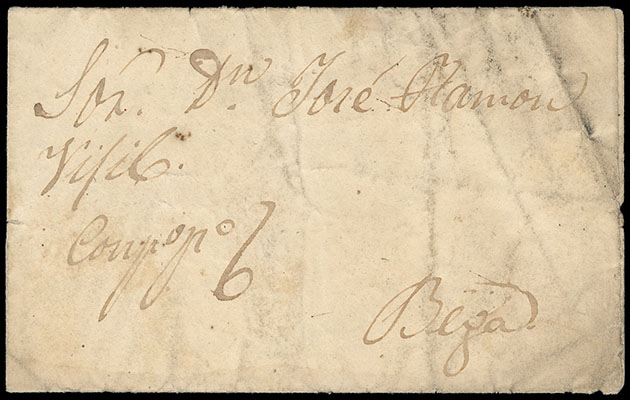 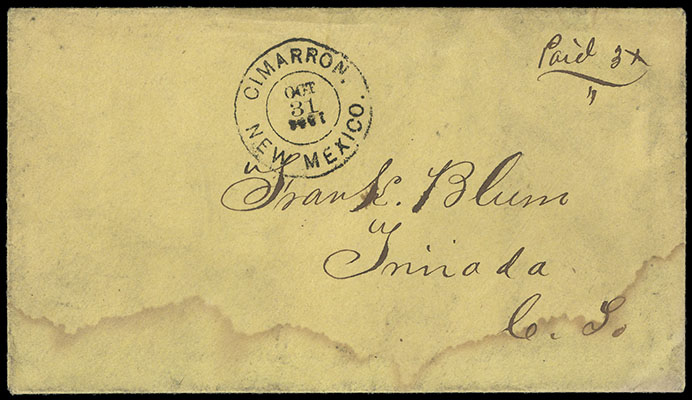 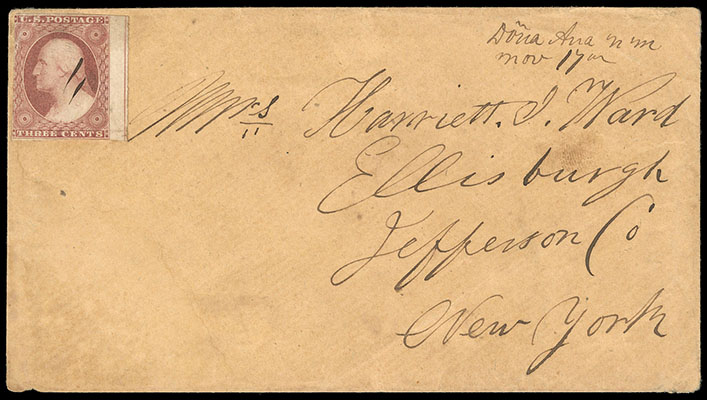 ONE OF ONLY 3 RECORDED EXAMPLES OF THE DOÑA ANA MANUSCRIPT TYPE 1 POSTMARK.

The town of Dona Ana had a post office in operation for a short period of time from March 1854 to fall of 1855. The main purpose was to handle military mail from the area of southern New Mexico. The western part of this large county extending into Arizona was acquired when the Gadsden Purchase was completed on December 30, 1853 for the payment ten million dollars. This large area of land in southern New Mexico and Arizona allowed for future railroad construction to the coast.

The postal records for 1855 show that this small office reported only $2.18 in postage sales for the year. 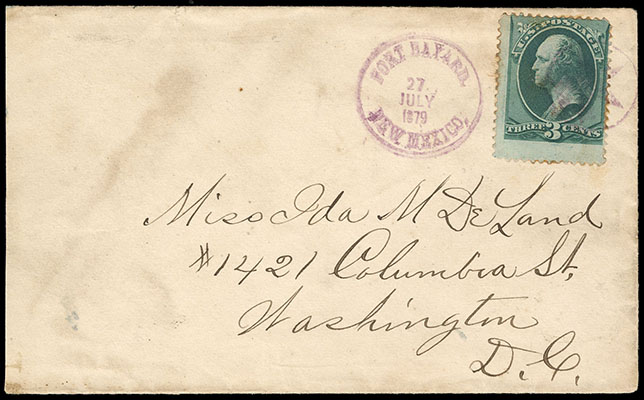 The fort was established in the Santa Rita Mining District in 1866 to help subdue the Apache uprisings that so disturb the intensive copper mining going on in the area. The fort was garrisoned with three companies of about 350 men in the Black Mountain district at 6,000 feet. The troops enjoyed a mild climate in this mountainous area. The fort remained active much longer than most forts in New Mexico, and was finally closed in 1899 just a few years after the surrender of Geronimo's band in Skeleton Canyon in 1886. 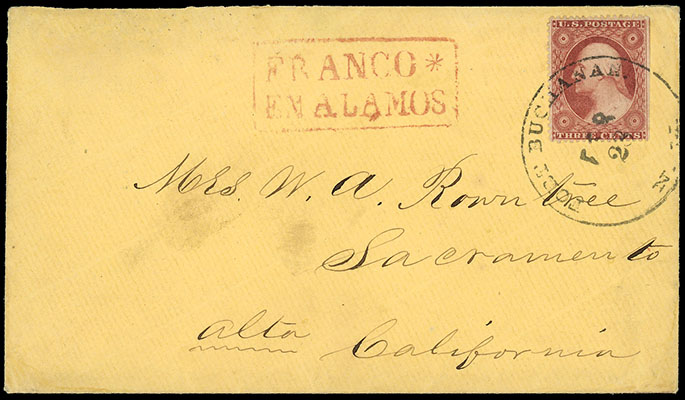 ONE OF ONLY TWO RECORDED COVERS ORIGINATING IN MEXICO WITH THE "FRANCO EN ALAMOS" HANDSTAMP TYING STAMP.

This fort was located near the Sonoita River about 40 miles south-southwest of Tucson in what was then the Territory of New Mexico, before the establishment of the Arizona Territory in 1863.

The first detachment of U. S. First Dragoons under Col. J. V. F. Blake arrived at the site on Nov. 17, 1856, and began the construction of the fort, first calling it Camp Moore. The fort developed rapidly and on May 29, 1859 the name was changed to Fort Buchanan. It was a rough and crude establishment in the early days, but played an important part during the Indian wars against the Apaches and other tribes scattered through the area. The Post Office was established on June 5, 1857 and discontinued Oct. 21, 1863.

During the early days of the Civil War the fort was burned on July 21, 1861 to keep it from falling into the hands of Confederate troops who were coming from Texas into the southern area of New Mexico during the Civil War.

The fort was located in New Mexico Territory at this 1858-59 time. The Arizona Territory was not established till February 24, 1863. It may well have been that Geo. W. McDonell was the mail agent for Butterfield at Fort Buchanan during this period. 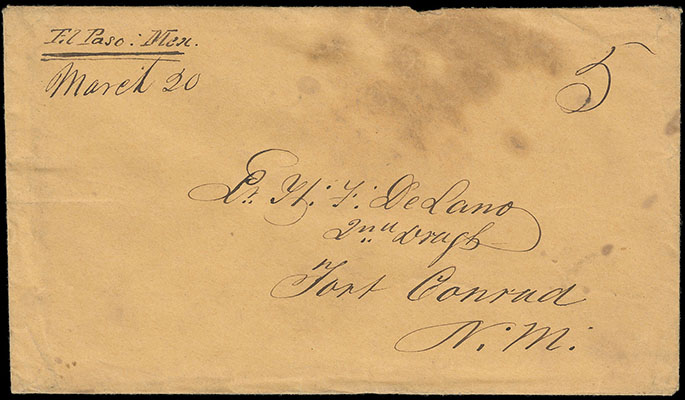