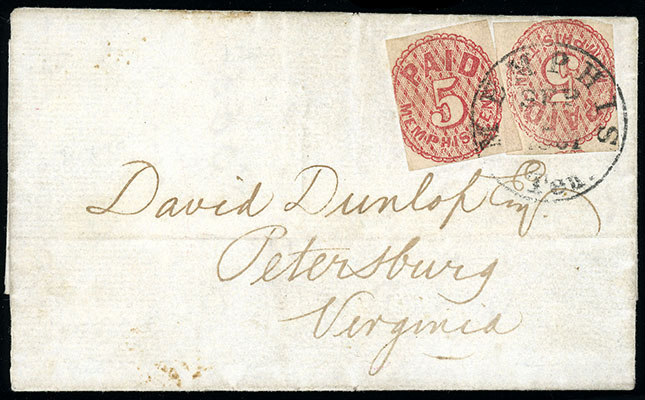 AN EXTREMELY RARE ACROSS-THE-LINES COVER FROM ENGLAND TO PETERSBURG, VIRGINIA, VIA MEMPHIS, TENNESSEE. PROBABLY CARRIED BY ADAMS EXPRESS FROM BOSTON TO MEMPHIS.

This letter from London, England was carried by the Cunard Line "Canada" from Liverpool Aug. 10th 1861 to Boston arriving Aug. 23rd. All express mail between the North and South was banned after August 26, 1861, but this arrived in time to cross the lines. We believe this cover was in a bundle of letters addressed to the South sent in a package from England to the Adams office in Boston. At Boston, the package or individual letters under cover were sent south to Memphis and posted there as normal C.S.A. mail.