The Gary Munson Collection of Hawaii 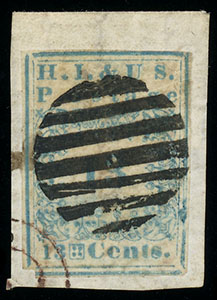 ONE OF ONLY A HANDFUL SOUND 13¢ "H.I. & U.S. POSTAGE" MISSIONARIES EXISTING, AND ONE OF ONLY FOUR EXAMPLES DOCUMENTED ON-PIECE.

These stamps were printed on a very fragile thin pelure paper whose very nature nearly always dictates imperfections that has escaped this sound example.