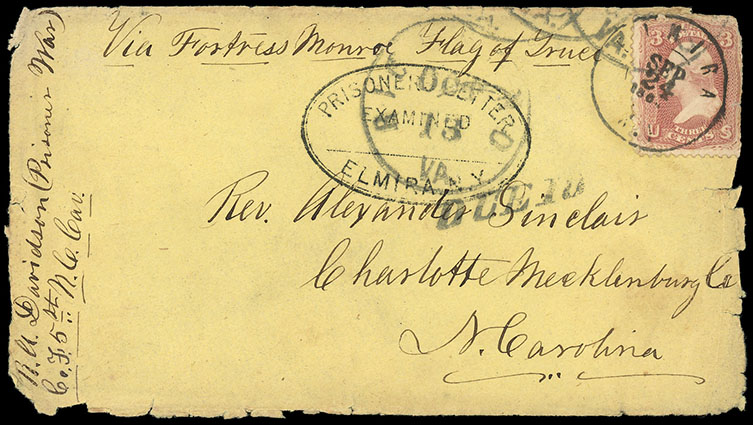 Confederacy, Elmira Prison, N.Y. - P.O.W. Mail, the correspondence of Sgt. Robert A. Davidson, 5th Cavalry, 63rd N.C. State Troops; three 1864 covers with family letters: the first to Davidson, via Flag of Truce (stamp missing) at Point Lookout Md., Apr 23; other two from Davidson at Elmira, N.Y., Sep 22 and Nov. 4, the former (envelope falling apart) also via Flag of Truce with Richmond c.d.s. and both with oval "Prisoner's Letter/ Examined" handstamps; the last two letters reporting on his health and requesting article of clothing, one suggesting the possibility of a prisoner exchange, letters are Very Fine.
Estimate    $200 - 300.

Ironically, despite reporting in these letters that he was in good health, Davidson would die in prison before the end of the war.