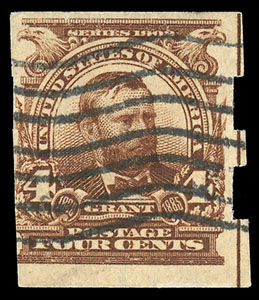 A VERY RARE AND CHOICE SOUND EXAMPLE OF THE 1908 4¢ IMPERFORATE WITH SCHERMACK TYPE III PERFORATIONS - WITH ONLY FORTY TWO USED EXAMPLES RECORDED AND THE ONLY USED EXAMPLE BEARING A GUIDELINE.