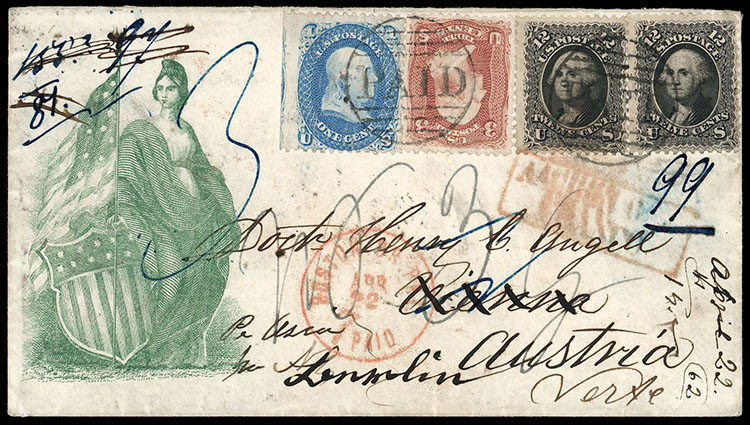 Dr. Henry C. Angell (1829-1911) graduated from the Hahnemann medical College of Philadelphia in 1853, and subsequently spent four years of study at the hospitals of London, Paris, Vienna, and Berlin. Afterwards, he settled in Boston becoming Professor of Ophthalmology at Boston University school of medicine. He was president of the Philharmonic society of Boston and an avid art collector. In 1861, illness in his family compelled him to go to Europe. In this visit he spent three and a half years, devoting his time and studies to the diseases of the eye. The larger portion of his time was spent with Professors Arlt and Jæger in Vienna, three months with Professor Von Græfe in Berlin, and six months in the eye clinics of Paris and London before returning home in 1864. It as during this time he received the wide variety of Civil War patriotic envelopes mailed to him while in France, Italy, England, Germany and Austria, plus a few forwarded to other destinations.