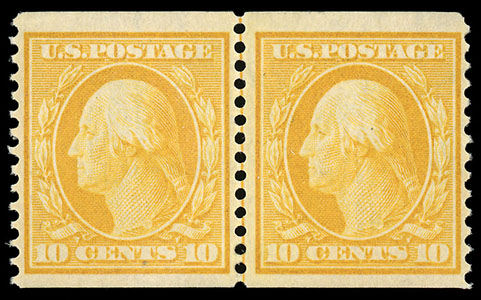 The 1909 10¢ horizontal coil issue is known as one of the rarest of all U.S. coil issues. Only 15,000 where produced in rolls of 500. These rolls where sent to only six cities. Five of the 30 rolls where sent to the Chicago, Ill. Post Office where a Chicago auction firm purchased three rolls. They where able to sell approximately 300 to collectors while the balance was used on their mailing and sold to a local bank. This 300 sold to collectors apparently makes up a majority of the known mint examples on the market today.