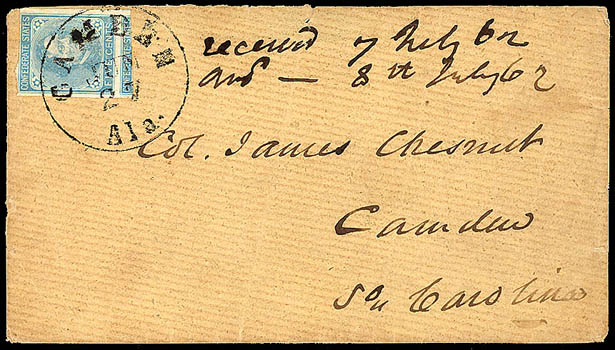 The cover addressed to Col. James Chesnut, who later became a Brigadier General Chesnut (1815 - 85) was a lawyer and politician, who later became a U.S. Senator from South Carolina. He served in the Senate from 1858 until South Carolina's secession from the Union in 1860. Once the Civil War broke out, James Chesnut, Jr. became an aide to President Jefferson Davis and was commissioned a brigadier general in the Confederate Army.

Chesnut was married to Mary Miller (1823 - 1886) who was a South Carolina author noted for writing a sophisticated diary describing the American Civil War and her upper class circles of Southern society. In 1981 the historian C. Vann Woodward completed his annotated edition of the diary, which was republished under the title Mary Chesnut's Civil War. It won the Pulitzer Prize in 1982.