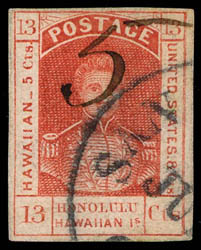 AN OUTSTANDING USED EXAMPLE OF THE 1857 5¢ ON 13¢ PROVISIONAL SURCHARGE.

The 5¢ provisional surcharge was necessary due to a shortage of 5c stamps just after the transition from Postmaster Whitney to Jackson. Most were made by Jackson's clerk, Alvah Clark, around the Start of 1857. New supplies of the 5c stamp (Scott No. 8) were received at the end of June 1857.