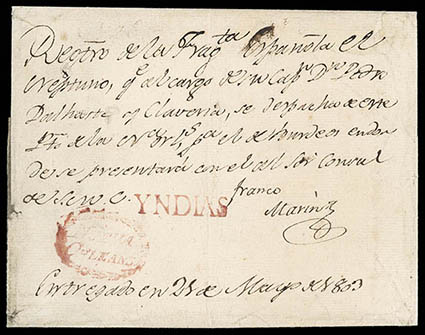 Nueva Orleans - 21 de Mayo 1803, ship's register folded letter sheet to Bordeaux, with red straight line "Yndias" handstamp and the exceedingly rare "Nueva Orleans" fancy oval wreath handstamp on dispatch, signed by the postmaster of New Orleans "Marín" with accompanying "franco" notation above indicating postage paid, reverse with "Payo 32 rls" following the norm for this postal document, well preserved with all four flaps complete, including the red wax used to close the cover and being one of the characteristics which determined the ship's register to be considered as a sealed postal correspondence, Very Fine, ex-Kouri.
Estimate    $15,000 - 20,000.

ONE OF ONLY TWO RECORDED EXAMPLES OF THE SPANISH "NUEVA ORLEANS" OVAL WREATH POSTMARK IN PRIVATE HANDS.

Louisiana was under Spanish administration as part of the Viceroyalty of New Spain (1762-1802), when it was retroceded to France according to the Third Treaty of San Ildefonso (1800) and the Treaty of Aranjuez (1801). However, Spain agreed to continue administering the territory until November 30th of 1803 when the French took possession of the colony, three weeks before Louisiana Purchase on December 20th. Additional significance of this cover is that it is one of only two ship’s register covers known originating from a colony and sent to a non-Spanish destination (this item had to be submitted to the Spanish consul to Bordeaux, as indicated on front). Additionally this is an exceptional postal usage during the short period of Spanish provisional administration after the official transfer to France.