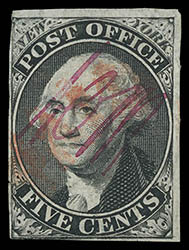 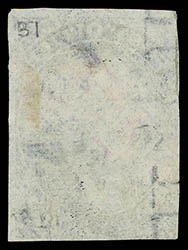 A RARE AND DESIRABLE EXAMPLE OF THE NEW YORK POSTMASTER'S PROVISIONAL ON PAPER SHOWING PART OF THE PAPERMAKER'S WATERMARK.

In his Chronicle series Philip T. Wall recorded watermarks with portions of an "E" or an "F". In the 1936 MacGuffin article in the American Philatelist, it was reported that of 2,000 stamps examined six copies were found to have a watermark, with the letter "J" identified. The stamp offered here clearly has an "E", and the second letter could certainly be a "J".