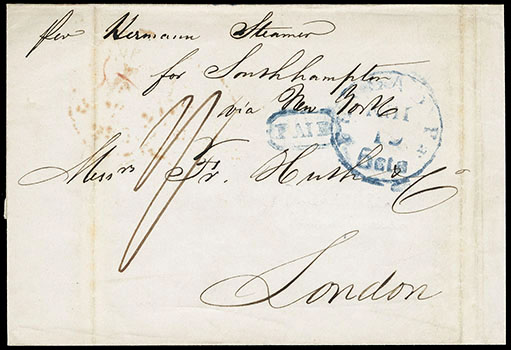 In March 1845 Congress authorized a 24¢ sea-postage rate for letters carried on American contract vessels, a charge to be added to inland postage. The first contract was awarded in June 1847 to the Ocean Line. Great Britain immediately began charging their one-shilling packet rate on incoming American packet letters, rather than treating them as unpaid ship letters. Because eastbound letters sent during this period were effectively charged double, most letters were sent on Cunard sailings.

No American packet letters from Philadelphia during this period are recorded.

The sender endorsed for American packet Hermann via Southampton, but paid only inland postage, so the New York post office sent via Cunard steamer as an unpaid ship letter.
https://www.rumseyauctions.com/