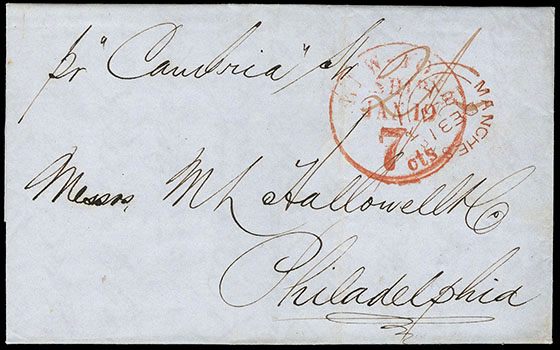 CARRIED ON THE FIRST DIRECT MAIL VOYAGE TO NEW YORK BY THE CUNARD LINE.

New York ship-letter postmarks appear on Cunard covers for only six months in 1848 and two months in 1849, prior to 8 March 1849 New York arrival of the first Cunard steamer to sail under the United States - Great Britain postal convention.

In January 1848 Cunard added New York as a second American terminus, after which sailings alternated between Boston and New York. Both west and eastbound sailings called at Halifax for Canadian mails. By April 1848, sailing frequency had increased to weekly. By the winter of 1852-1852 service was year-round.
https://www.rumseyauctions.com/