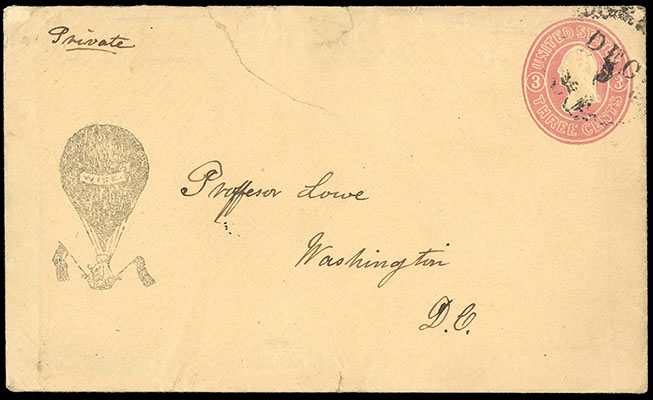 Wise Manned Balloon, handstamped cachet of manned balloon illustration with "Wise" inscription and flags, on circa 1861 3¢ pink (U35) buff entire cancelled with partial Dec. 5th cds and addressed in Wise's hand to Professor Lowe in Washington D.C.; large tear, and some edgewear, Fine and rare use.
Estimate    $500 - 750.

This envelope was from John Wise to T.S.C. Lowe, Chief of the United States Balloon Corps. Wise was the most acclaimed balloonist in America in his time. He established a flight record of 802 miles in 20 hours in 1859. Lowe was the chief aeronaut of the Union Army from June 1861, to the end of 1862 and organized the aerial units of the Union Army.