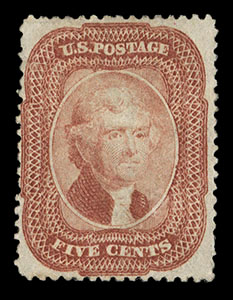 Although chronicled as the first of the 1858-61 5¢ Issues, the 5¢ brick red was not actually used for months after the red brown and Indian red type I shades, making it the third issue in the series. A search of the Philatelic Foundation Certificate Search revealed approximately 20 mint examples bearing original gum including the Worthington block of four which is though to be unique. Of these examples, about half bear some type of fault and all have perforations impinging on the design on one or two sides.