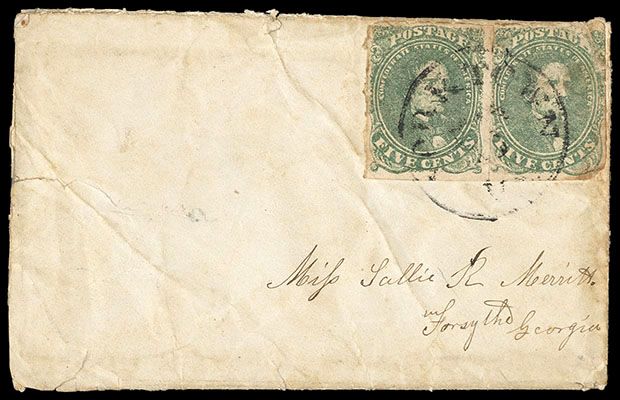 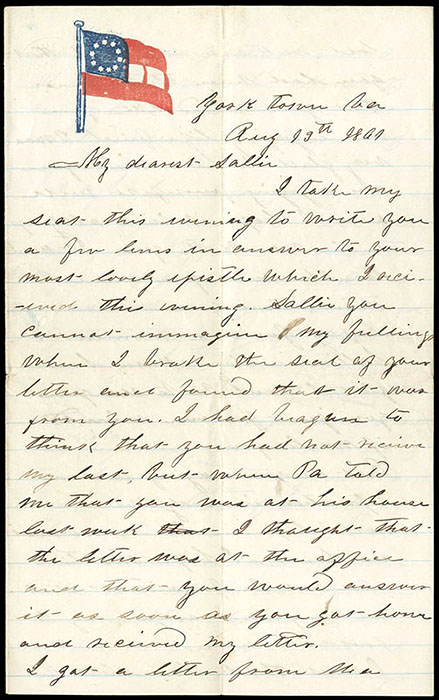 Confederacy, 10-Star Flag Patriotic Lettersheet, red and blue design (C.S.A. type F10-3 var.) on two lettersheets datelined "York Town Va., Aug 13th 1861" with some excellent content "…I don't think there will be much more fighting, and I think we will be allowed to come home about the last of December or the first of January. I left here last Friday, was a week ago and we have been going from our place to another trying to get a fight with the Yankees, but they are so cowardly that they will not fight us. One night we encamped in a mile and a half of Fortress Monroe, and Newport News and one Virginia Regiment went over in two hundred yards of the Yankees and burned the beautiful city of Hampton, and the Yankees seen and cried out murder and was scared worse than so many little children, and of the men that belong to the Cavalry rushed through the ranks of the enemy and fired both barrels of his gun and then shot five times with his repeater, and then he drew his saber and dashed through the rank of the enemy like a madman, and the Yankees was so badly frightened that they did not fire a gun and they run in every direction. Such as that goes to prove that there is no fight in them (The Yankees)…My constant prayer is that we will be allowed to return home in a few months and then remain in peace and quiet. But if it not my lot to return home, I pray that I will be carried to that better world where there is no such thing as war, and where it will be our continual song of praise to Him that sits upon the throne. Sallie, I want you to remember me in your prayers, and if we never met again on earth, I hope we may meet in a better world to part no more…" and signed "T.F. Head", accompanied by original cover bearing 5¢ green (1) pair tied by "Yorktown Va., Aug 13" cds to Forsyth Ga., faults and soiling, F.-V.F.
Estimate    $400 - 600.