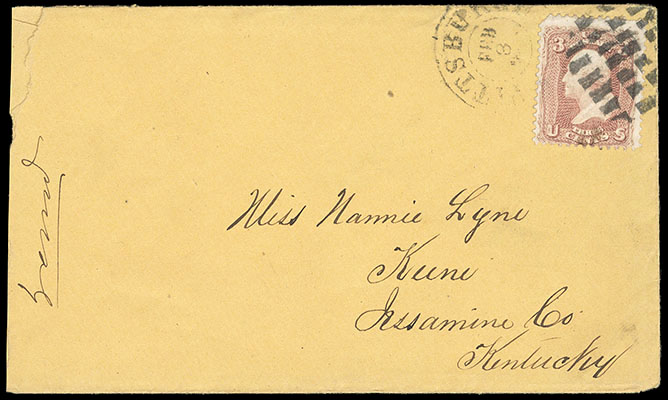 Confederacy, Allegheny City Penitentiary, buff cover bearing 3¢ Rose (65) tied by circular grid cancel duplexed with "Pittsburgh Pa. Feb 3, 186" double-circle datestamp to Miss Namie Lyne at Keene Ky. from one of Morgan's Raiders, Lieut. Van J. Sellers, manuscript "Examnd" examiner's mark at left, original letter datelined "Allegeny City Feby. 1st 1864." with some interesting content "…I received a letter from Wallace, the first for more than a month. Two days since she has been sojourning among the Buckeyes even in the Godless city of Cincinnati and makes that an excuse for not writing sooner … I do not want for books such as they are, tho the prison library is pretty well stocked with Bibles, and (is it not horrible) novels, beside friends of the prisoners send books often…" and signed at bottom "Van J. Sellers", Very Fine from one of the officer's in the celebrated Morgan's Raiders, ex-Gallagher.
Estimate    $1,000 - 1,500.

Sellers was first captured in May of 1862 and was released six months later in a prisoner of war exchange. He immediately joined Morgan's Raiders. In June and July 1863, General John Hunt Morgan led 2,460 confederate cavalry over a thousand miles on a trail of terror through Kentucky, Indiana and Ohio. when Morgan's Raiders were finally captured in 0hio in late July, Sellers was one of the Confederate prisoners held for approximately eight-months between 1863 and 1864. The Allegheny City Penitentiary held only 112 of the captured Morgan's Raiders; no other confederate prisoners. According to another letter by sellers to Lyne, "There are here confined 112 prisoners of war. These occupy cells on the first and second corridors of the center building of the prison. On the first or lower corridor are four double cells about 20 x 16 x 8 feet in dimensions. ln each of these five prisoners are confined. The remainder are confined in single cells of half the above size, two in each cell." According to Rich Gigler in an article in the Pittsburgh Press Roto, the routine operations of the prison were assigned to the provost marshal Captain E. S. Wright, Mail was apparently censored and out-going letters were restricted to one and one-half pages. By November 1863, the local residents and some Union officers were questioning the outrageous expense of 46¢ a day to feed each of the prisoners. Gigler noted that Sellers was eventually was moved to Point Lookout, Maryland.