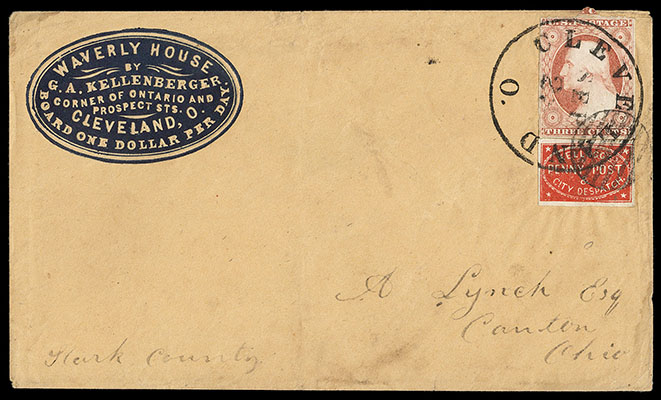 THE FINEST OF THE SIX RECORDED COVERS WITH THE KELLOGG'S PENNY POST STAMP -OF WHICH ONLY THREE ARE TIED BY A HANDSTAMP.

Kellogg's Penny Post & City Despatch was a relatively short-lived local post in Cleveland. It is believed that the post existed in 1853 and 1854. A cover dated June 28 (1853) and a piece dated April 7 (1854) are the earliest and latest recorded dates of use for the 92L1 stamp. Carrier service in Cleveland began in December 1853, which probably forced Kellogg's out of business by mid-1854.

This cover with City Despatch and U.S. Postal adhesives both tied by corresponding postmarks is truly an exceptional item of the utmost beauty.
https://www.rumseyauctions.com/