Baltimore to New York via Philadelphia 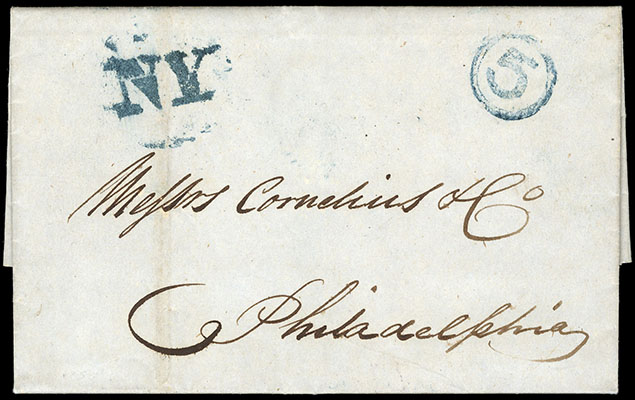 Towle states most authorities believed that this marking to have been applied to New York-Philadelphia mail carried by railroad and posted at convenience boxes at stations or ferry terminals. They were probably postmarked by post office clerks at New York or Philadelphia depots or post offices, most likely at the latter point. They occur at an early period when there were contract difficulties between the P.O.D. and the New Jersey railroads. Most of these examples predate the appointment of the first route agent on the New York-Philadelphia route, during Jan.1847.

However, noted Postal Historian, Richard Frajola states, "Although this "NY" marking has historically been considered a railroad route agent marking, I believe the marking was most likely applied at Philadelphia to indicate that the letter was received from New York in a closed bag (although the closed bag was carried must of the way by rail)".