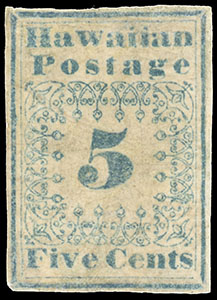 ONE OF ONLY TWELVE RECORDED UNUSED EXAMPLES OF THE HAWAIIAN 1851 5¢ MISSIONARY, OF WHICH ONLY TEN ARE AVAILABLE TO COLLECTORS.

According to the Siegel census there are only twelve unused copies recorded (two of which are in the Tapling collection at the British Library). The Scott Catalogue notes that "values are for examples with minor damage that has been skillfully repaired".