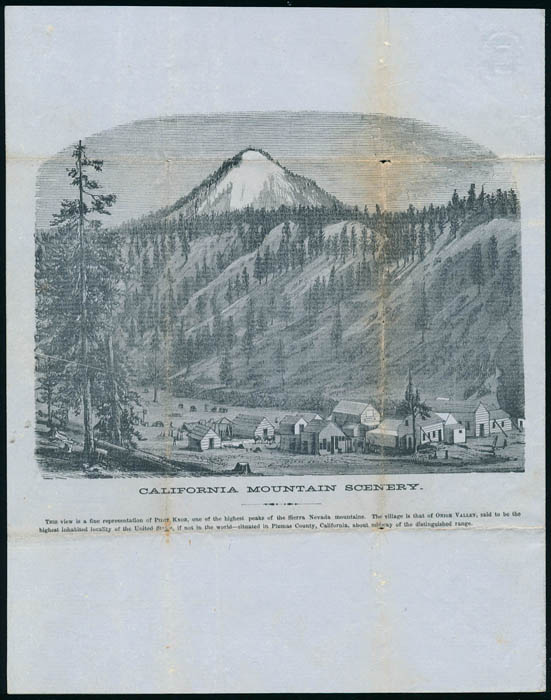 California Mountain Scenery, no artist or publisher's markings, but similar to Baird 187; "Onion Valley with a View of Pilot Knob," published by the Sacramento Union, wood engraving 5.12x6.85" on a pale blue wove paper folded double sheet 9.75x15.5", with letter datelined "Pilot Hill & Coloma, Friday, Dec 17th 1858" which mentions illustration…I send on this sheet a very good representation of California scenery, though not of every place where I have been. It has some of the features of Coloma, especially of the mountains on the north side of the river from the town; some wear and toning along folds, otherwise Very Fine.
Estimate    $2,000 - 3,000. 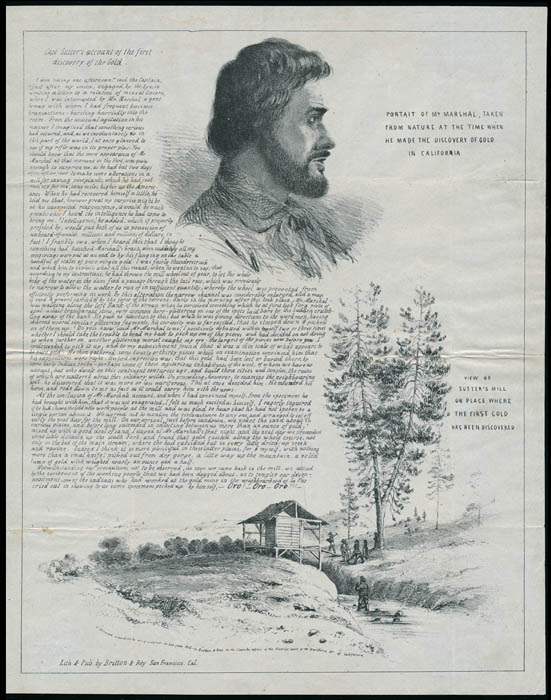 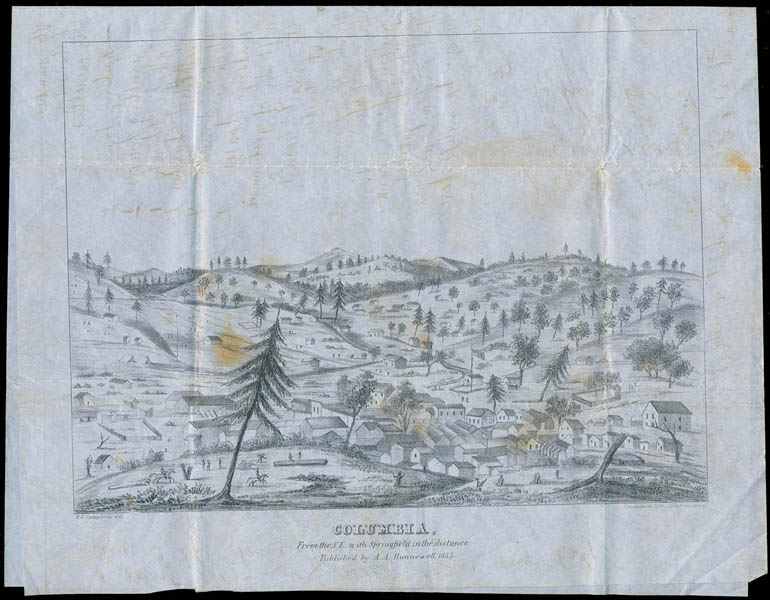 Columbia, From the South East with Springfield in the Distance (Baird 40) artist T.S. Campbell; producer Benjamin F. Butler, a New York lithographer who arrived 1851; and publisher Alfred A. Hunnewell, Columbia's Postmaster, who dated this 6.25x8.35" view to 1853, folded pale blue double sheet 10.5x17", with letter datelined "Columbia, California, March 26th, 54" with news of mining…when we first came here we went a prospecting 2 or 3 weeks & found a claim that we thought would pay. We worked in that 4 weaks then gave it up. We didn't averag much. Some days we made 5 dollars a day, then again wouldn't get any more than water money. We have to pay 6 dollars a day for water.…I shall go to the Northern mines before long., and of the town…The Peple don't mine any on Sunday so they come in to Town to Trade & to drink & to gamble. Every now & then we hear of some body's being shot or stabed or els a duel & so it goes Brisk & Lively; few light tone spots, Very Fine.
Estimate    $1,000 - 1,500. 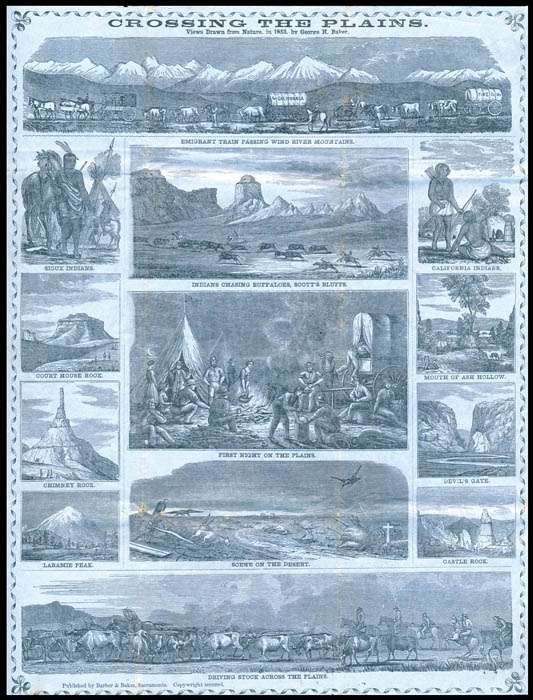 Crossing the Plains (Baird 47) comprised of 13 wood engravings scenes by Barber and Baker, Sacramento, folded double sheet on pale blue paper, 11x17.5", letter datelined on November 11, 1854, Varnum Abbott wrote from Sandy Bar, Yankee Jim's, Placer County to "Respected Father, Mother, & Sister.", the tenor of his letter was…I can't tell certain when I shall come home, but went into great detail…I would be hapy to come home this Winter, but as I am situated I think it will be the best for me to stay another year & then if I don't get a small fortune, I can come home & stay satisfied. With this country you might suppose that the reason why I don't come home this fall is because I haint got money. I can say that I have got enough to come home with any how & I intend to keep enough so that I can come home when I please; some toning in letter portion of sheet, Very Fine, a rare California lettersheet with only a few known.
Estimate    $1,000 - 1,500.

George H. Baker (1827-1906) was a '49er, merchant, expressman, artist, and lithographer. In July 1850, he formed Baker's Express and made one financially-disastrous, 290-mile mule-mounted trip from San Francisco into the Feather River Diggins. In June 1854, now in Sacramento, artist Baker joined with wood engraver Edmond L. Barber (1808-1870) to form, he advertised, "the largest Engraving Establishment on the Pacific Coast." The pair published Sacramento Illustrated (1855) with 31 engravings. This "Crossing the Plains" letter sheet exclaims "Views Drawn from Nature, in 1853, by George H. Baker." He made these sketches on a return trip to California from Boston with supplies for his Sacramento store. James Mason Hutchings published letter sheets using friend Baker's images in late 1854 and 1857. 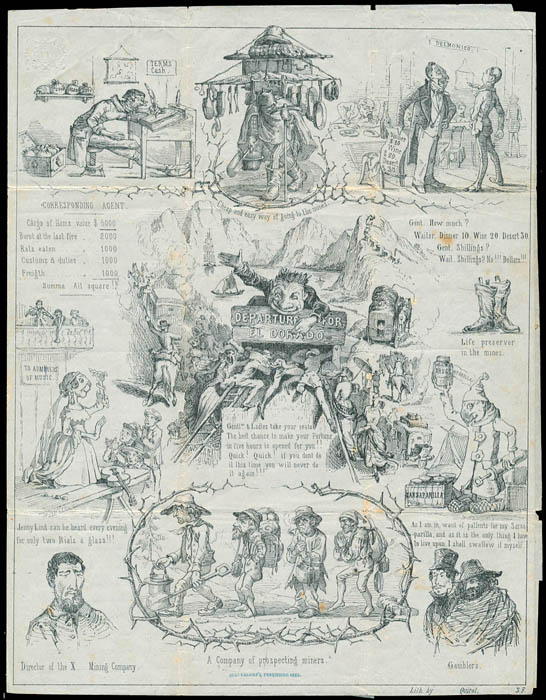 Departure for El Dorado (Baird 51) comprised of ten satirical views lithographed by C. Quirot, between 1851 and 1853 (after Emanuel Justh left the firm), seller was the Noisy Carrier's Publishing Hall with small blue handstamp at foot of illustration, folded light gray double sheet 10.75x16.5", with letter datelined "Rancherea, Cala, June 9th, 1854", Amos addressed his dear "Miss Smith", He is…one who thinks there is no other so kind & so Beautiful & Lovely as you and your miniature I have with me where ever I go, the love-sick suitor is most serious…These words, he tells Mollessa, come from a tru hart and one ho loves you, and that hart is mine, he pleads for her to write to me and tell me if I can have any such clames on you, however - same old story…It was my intention to come this spring, But Being unsuccessful in Business last Winter, I am and have determined to stay one more year Now, It is my Intention to return home in the spring without fale promising next May you will then see me.; couple minor fold splits and a couple small tone spots, Very Fine, a wonderful used caricature lettersheet.
Estimate    $1,000 - 1,500. 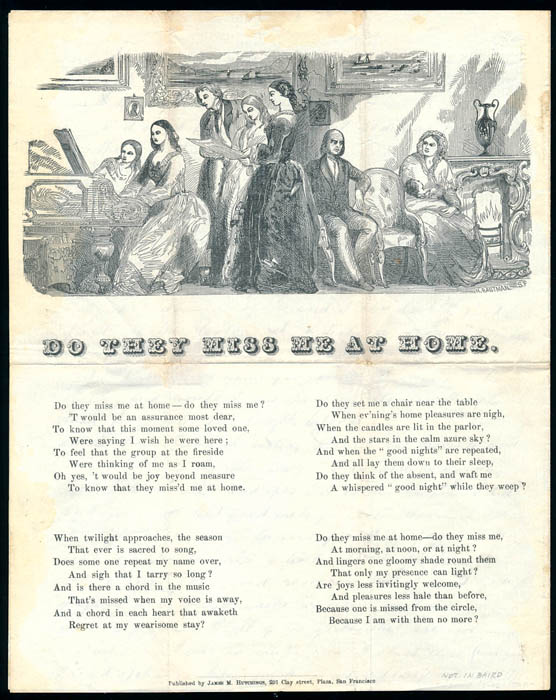 Do They Miss Me at Home (Baird 55) shows a 3x7.25" engraving of a parlor scene by wood engraver and artist Harrison Eastman with four verse below, with letter datelined "San Francisco, Apr 3rd 1856" with content regarding the city and coming home; some faint staining, Very Fine, a rare lettersheet with only a few known.
Estimate    $1,000 - 1,500.

The publisher is "Mr. Yosemite" James Mason Hutchings, then running the Express Book Store at 201 Clay Street (old numbering) on the south side of the Plaza or Portsmouth Square. In 1855, printers Towne & Bacon printed 1000 copies of this letter sheet for $10. 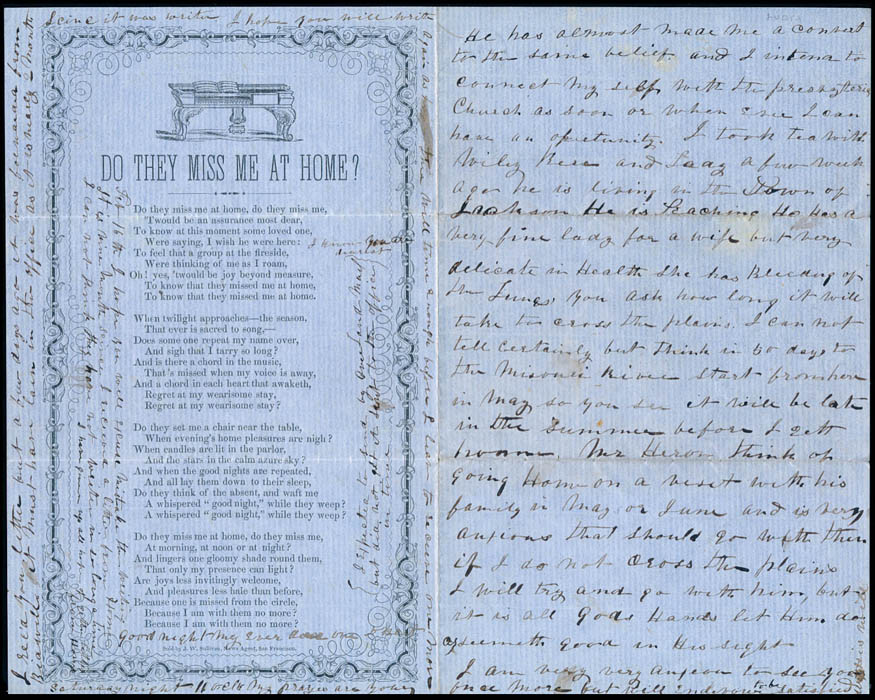 Do They Miss Me at Home? (Baird unlisted) letter press printing with a cut of a piano and verse below, single sheet 8.5x10" folded light blue wove paper, with letter datelined "Elk Grove, Feb 12 /59" with content…After leaving Bidwell's Bar, I tried to get some thing to do, but as we have had so little rain and so little mining doing…after spending 2 months in fruitless endeavor, I came to [Elk Grove] and have been here some 3 weeks, and I do not regret it., Very Fine.
Estimate    $750 - 1,000. 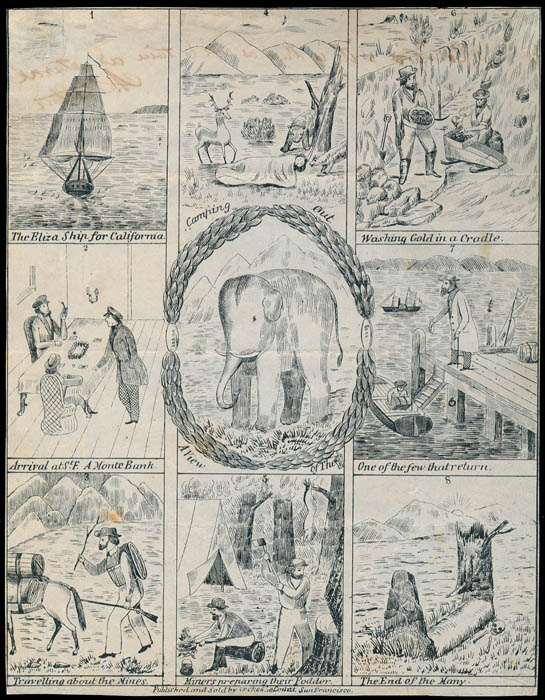 Eight Scenes of Mining Life and a View of the Elephant (Baird 293) published and sold by [William B.] Cooke & [Josiah J.] LeCount, San Francisco book sellers and stationers, trimmed gray lithograph 10.25x7.75", miner A. Stanton penned on the reverse "California as it is: Trew as life & twice as natural.", without letter, Very Fine.
Estimate    $300 - 400. 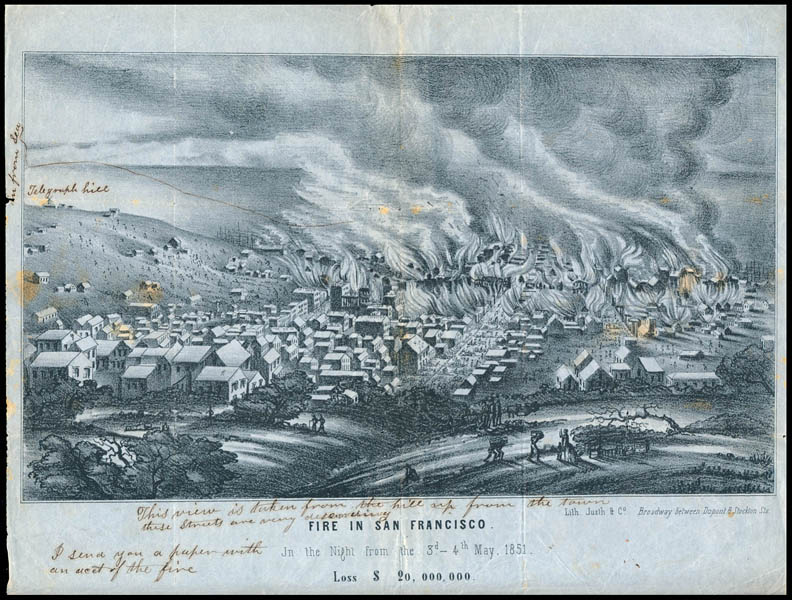 "SAN FRANCISCO HAD NEVER BEFORE SUFFERED SO SEVERE A BLOW." Annals (1854) THE WORST FIRE BEFORE 1906. The fire began on the south side of the Plaza, and shifting winds swept the flames through the business district. It destroyed 18 blocks, almost 2,000 buildings, and was the most costly of San Francisco's 6 fires between 1849 and 1851. The burnt area was 0.75 mile north to south and 0.33 mile east to west. 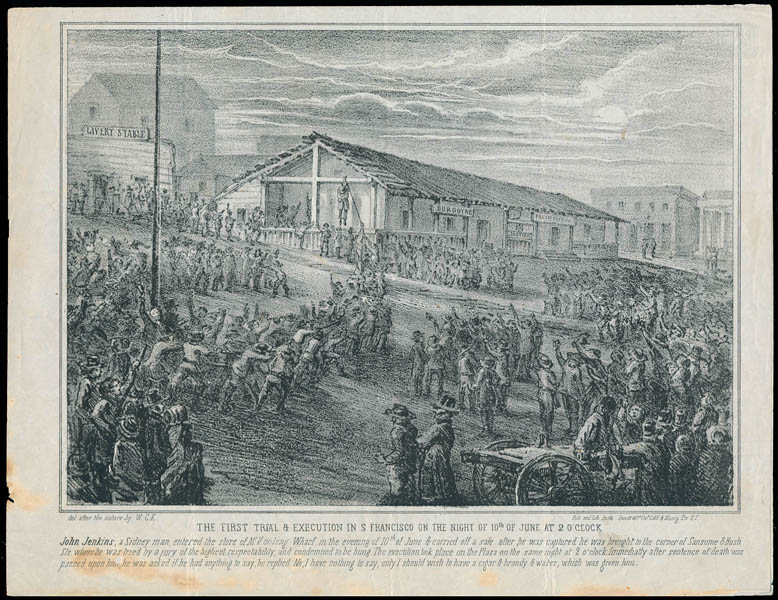 The First Trial & Execution in S. Francisco on the Night of the 10th of June at 2 O'Clock (Baird 79) drawn by W.C.K. and published and lithographed by Hungarian Emanuel Justh, later a noted assayer (1855-1861) & C. Quirot, perhaps the first letter sheet of their partnership, illustration 6x9.5" on a folded double sheet (10.75x17') on gray wove paper, with letter datelined "San Francisco 30th June, 1851" from James O'Grady approvingly told his friend George…I send you a very graphic picture of an execution by the People on the body of a Sidney man, a notorious character, who on being apprehended in the act of stealing a safe (a small iron one) containing about $200, was taken and tried by a people's jury, was condemned, and hung, he notes that…The old adobe building on the [south] end of which he [Jenkins] was hung was burned on the 22nd, "We are slowly recovering," he continued, "from these calamities of the 4th of May and [June] 22nd and still entertain hopes of out living them."; some edge toning and small unnoticeable hole in illustration, Very Fine, this was lot#74 in Dorothy Sloan's October 1994 auction of the Henry Clifford Collection, where it sold for $1,840.
Estimate    $1,500 - 2,000.

A RARE CALIFORNIA LETTERSHEET DEPICTING AND DISCUSSING THE ACTIONS OF THE FIRST COMMITTEE OF VIGILANCE.

At dusk on June 10, 1851, Australian John Jenkins robbed a money safe from the shipping office of George W. Virgin on Long Wharf. He attempted to escape by row boat, but was apprehended, and brought before the First Committee of Vigilance. Enflamed by Sam Brannan, the public grabbed the rope to hang him from the old Mexican Customs House on Portsmouth Plaza at 2 A.M. on June 11. Quick work: 6 hours from robbery to hanging.