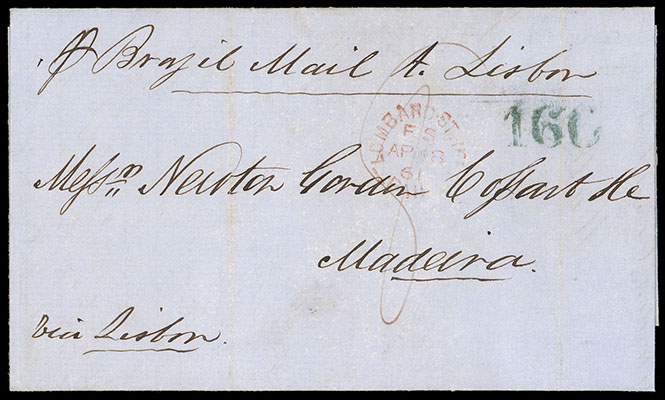 Confederacy, 1861 (Mar. 16) Charleston S.C., Confederate States to Madeira, gray folded letter endorsed "p Brazil Mail a Lisbon" at top and "Via Lisbon" at bottom left, some interesting content "…awaiting establishment of a Confederacy…send wine direct to Charleston and not via New York as double duty would be incurred…", red "Lombard-Street, Paid, AP 8, 61" rimless cds with red manuscript "8" pence prepaid rating, Portugal blue "160" reis due handstamp for up to ½ oz., April 12th receipt docketing, Very Fine and scarce Confederate use from the south just prior to the Civil War.
Estimate    $1,000 - 1,500.

With the coming of the U.S. Civil War, southern planters required different routes to keep their supply of favored Madeira wine flowing. 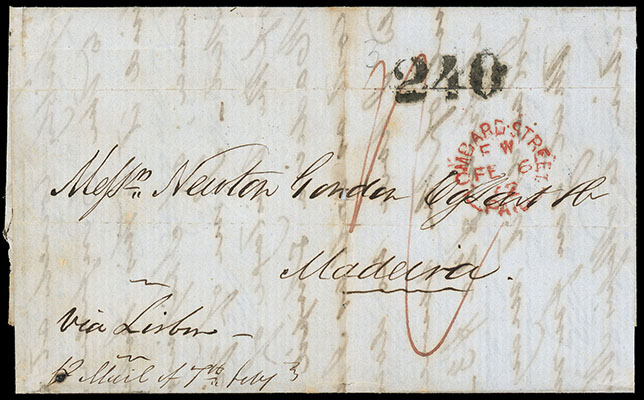 By September 1861, the Federal government had completed the suspension of the regular pre-war Post Office routes between the northern states and the seceded states. As a result, this letter took over five months to arrive in Madeira.