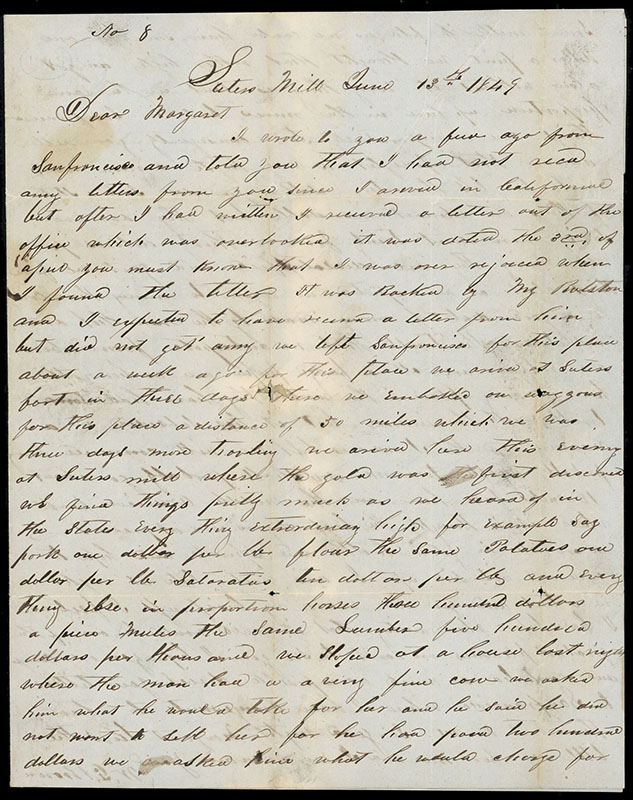 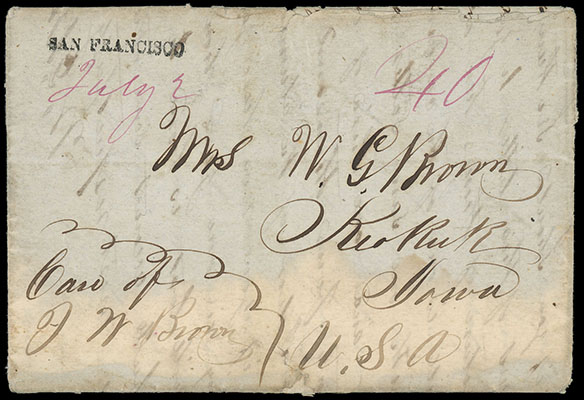 (Culoma) "Suters Mill, June 13th 1849", datelined on folded miner's letter that entered mails with "San Francisco" straightline postmark with magenta "July 2" dating and "40" rating to Keokuk, Iowa, from miner discussing the high prices, reads in part "…We arrived here this evening at Suters Mill where the gold was first discovered…Everything extraordinary high-for example sas pork one doller per pound-flour the same…There can be a good deal of money to be made by the men that are industrious, the trouble that we anticipated from robbers and ruffians are all a fudge…they have had some trouble with the indians, but it has subsided in a measure and the indians left. We will commence mining probably day after tomorrow. We shall probably go about 12 miles from here on the Middle American Fork where, it is thought, the best diggins are at present…", some staining and faults, Fine.
Estimate    $1,500 - 2,000.

THE FIRST RECORDED LETTER FROM THE AREA THAT WOULD BECOME COLOMA, THE EARLIEST MINING TOWN.

In the latter part of 1847, John A. Sutter, founder of "New Helvetia", later Sacramento, sent James W. Marshall to find a suitable site for a sawmill. Marshall chose a spot 45 miles Northeast of Sutter's Fort on the South fork of the American River, where Coloma, the earliest of all mining towns in California was founded the following year. Sutter's Mill was finished in March 1848, but on Janaury 24, 1848 Marshall discovered gold in the tailrace. The mill site was a Maidu Indian village named "Ko-Lo-Ma" and became the Miner's Cullomah. The post office began officially Nov. 8th 1849. The post office handstamps were Culloma-Alta California. The name was changed to Coloma Jan. 13th 1851 but the Culloma Post Office cancel continued until 1856. The Indians were forced out of Coloma by Jun 1849. Coloma became the hub of the Northern Mining region and became county seat when the County of El Dorado was created in 1850. 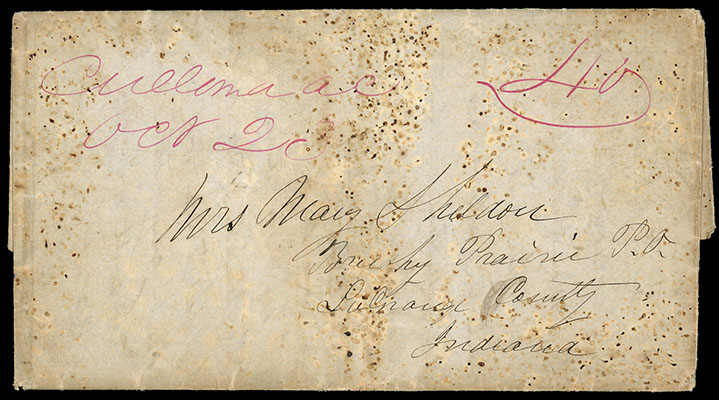 "Culloma, ac (Alta California), Oct 23" (ELD-390), red manuscript postmark and matching "40" rating on gray folded letter to Brushy Prairie, Indiana, letter from a recently-arrived miner is headed "Sacramento City Sept 30th 1849" and speaks of being ill after arriving in California and "…I no longer look for the large fortune I anticipated when I left the states. I find these large fortunes are the result of accident and but few are so fortunate. We think we will do about… 2 or 3 thousand a piece for the time we think of staying. If we had that now we would soon start for home."; minor splitting at the folds, address panel fly specked and toned, Fine and rare, The earliest recorded postmark from Coloma.
Estimate    $300 - 400.

The discovery of gold at Culloma in 1848 led to the California gold rush. The Culloma Post Office was one of seven offices established by the Postmaster General's second Special Postal Agent in California, R. T. P. Allen, beginning in June of 1849. The early spelling of the town name persisted into the 1850's.

This folded letter is the basis for the October 20, 1849, listing in Williams of the earliest and only known Culloma manuscript postmark. However, the date of the postmark is actually October 23 rather than October 20.

References: Illustrated in Coburn's Letters of Gold on page 36. 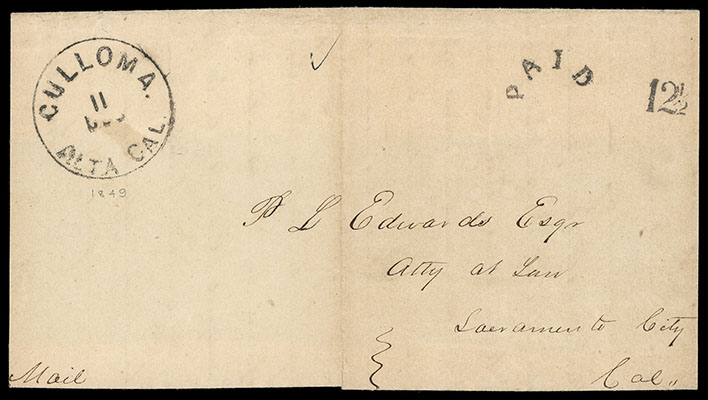 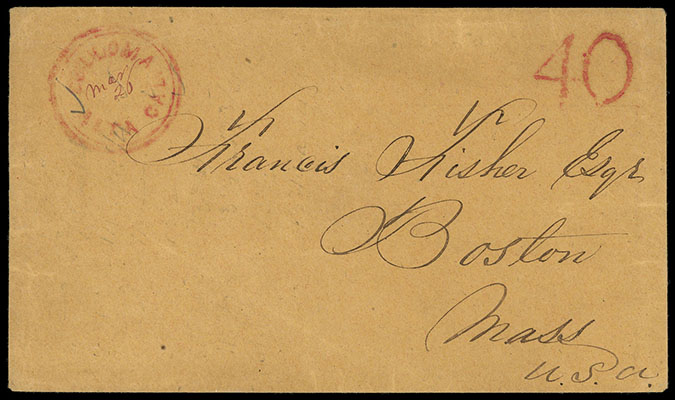 Culloma, Alta Cal. "Mar 26" (ELD-400), red double-ring datestamp with magenta ms. dating and red "40" handstamped rating on 1850 orange cover to Boston Mass., cover with original miner's enclosure included describing the town of Culloma and mining in the area, "…We started up on the fifth of February and stopped at Weaver's Creek three weeks where we made expenses in the intervals of fair weather; but the constant rains swelled the Creek and drove us out, which induced us to come up here - This is the place where the gold was first discovered, formerly called Sutter's Mills; it is a place of some five hundred inhabitants and is the general depot for the supply of the adjacent mining region…we intent to strike tent and leave for better "diggings"…", Very Fine and choice.
Estimate    $500 - 750. 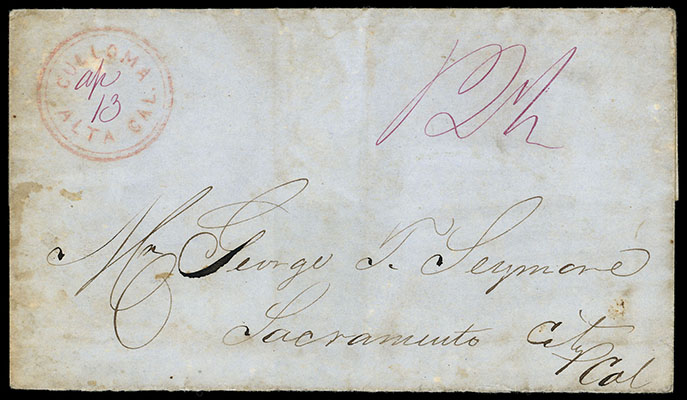 The Culloma Alta Cal. double-ring postmark is recorded by Williams from October 1849 to April 13th 1851. 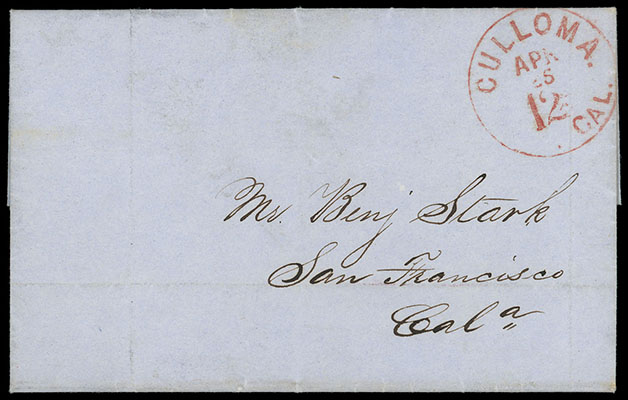 Culloma, Cal./Apr. 25/12½ (ELD-430 Var.), rare integral-rate cds in red with "Alta" removed on 1850 blue folded letter to San Francisco, miner's letter which mentions, "We have done much better so far this month, than last, one hole we sunk, and got out considerable of the article, including one lump worth 33 Dollars…", transcription accompanies, Very Fine and choice, ex-Kutz, Newton, Tatham.
Estimate    $300 - 400.

THE ONLY RECORDED EXAMPLE OF THIS UNLISTED CULLOMA INTEGRAL-RATE ALTERED CDS WITH "ALTA" REMOVED. 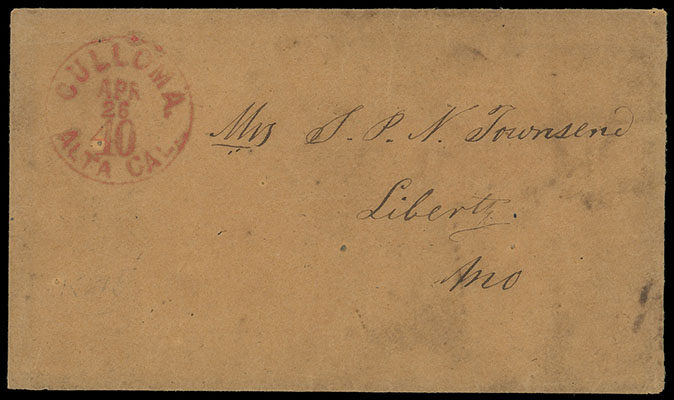 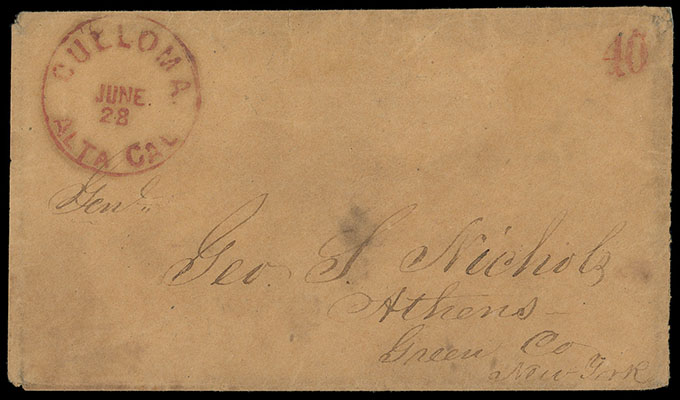 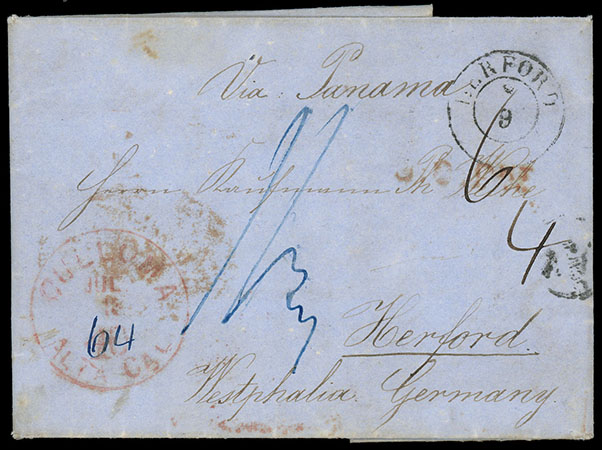 Culloma, Atla Cal. '40' Jul 13 (ELD-420), red integral-rate cds with blue manuscript "64" uprating (40¢ per ½ oz. West/East coast rate plus 24¢ Bremen Treaty Rate) on blue 1850 folded letter to Herford, Westphalia, Germany, endorsed "Via Panama" at top, red "U.S. Pkt." straightline, carried by Collins Line Pacific from New York Aug. 24th to Liverpool arriving Sep. 4th, blue ms. rating along with "6" and "4", Herford (9.8) arrival cds, letter datelined "Birds, 18 June 1850" reading "…this letter comes from the snow-mountains of California between the sources of the North and Middle Forks of the American River, which flows into the Sacramento near Sacramento City, I am writing this in the tent of several acquaintances from Bremen, who, tired of gold mining have started a small business here. Up till now, we continued to dig for gold even though we could not take pleasure in any significant success…The canyon was given the name El Dorado Paradise), and the story went around that last fall two Swiss found a major amount of gold therein. When we, after the success of our work on this channel, would live here, then maybe this place would deserve its name, because usually everyone earned two ounces by evening. Our best day was with a 3-man team - one pound (of gold) and two dollars…", Very Fine and choice use.
Estimate    $750 - 1,000.

The "Birds" was a store north of Culloma between the North Fork and Middle Fork of the American River. 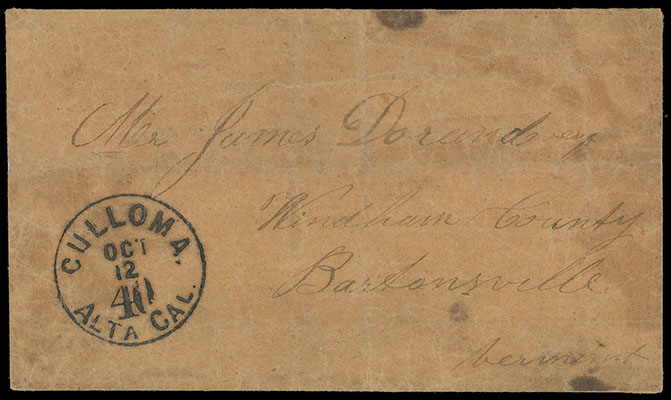