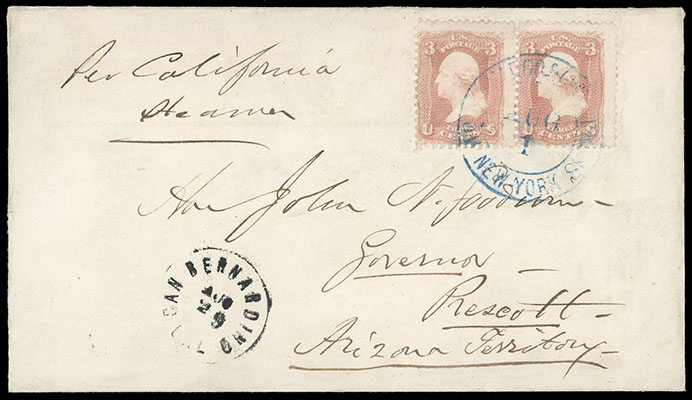 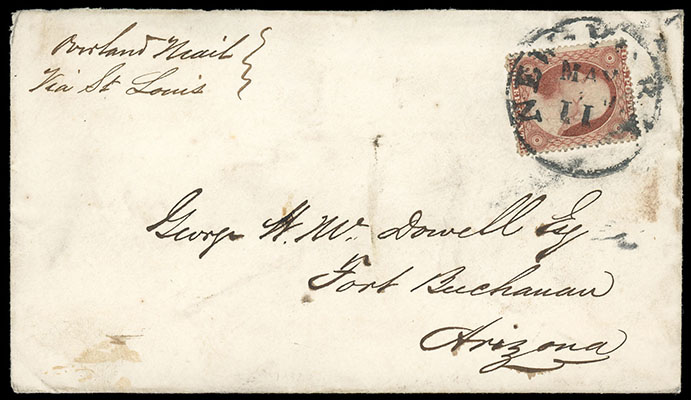 This cover went from New York City to St. Louis by railroad. Then from St. Louis on May 14 by Butterfield Overland mail stage to Tucson. From Tucson, it was carried on the Lathrop contract mail buckboard to Tubac. Then from Tubac, a Santa Rita River Mining Co. Expressman carried it to Fort Buchanan. From there, a Compadre Silver Mining Co. horseback expressman carried it to Sonoita Creek, south of Fort Buchanan, where Mr. McDowell lived in a cabin. 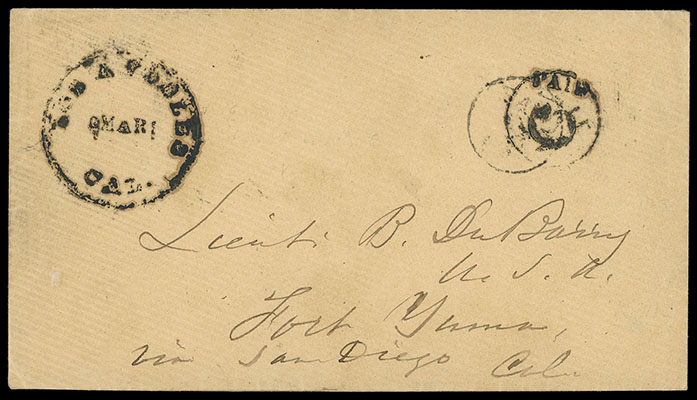 A RARE USAGE TO FORT YUMA CARRIED BY U.S. MAIL AND THE "DESERT DISPATCH".

Carried by U.S. Mail between LA and San Diego. At that point the U.S. Mail service turned it over to a military express or to the Desert Dispatch express that operated between Fort Yuma and San Diego as no mail service was establish between the two locations. Samuel Warnock and Joseph Swycaffer, retired U.S. Army, accepted a contract to carry mail and government dispatches from Old Town San Diego to Fort Yuma, and back. This was the earliest private mail express to New Mexico Territory (Arizona Territory in 1863) from the West.

Fort Yuma was established in 1852 to protect settlers and to keep the Southern Emigration route safe. It was located on the eastern side of the Colorado River with corrals, shops and government storehouses, etc. It was the grand depot for all posts in Arizona Territory. The Yuma post office was established on October 16, 1866. The Wells Fargo & Co. station at Fort Yuma was located in the Hinton & Hooper Store in Yuma City. The military records show Fort Yuma as being in California, the U.S. Government records show Fort Yuma as being in Arizona Territory until 1874 when the old fort was determined to be in California. 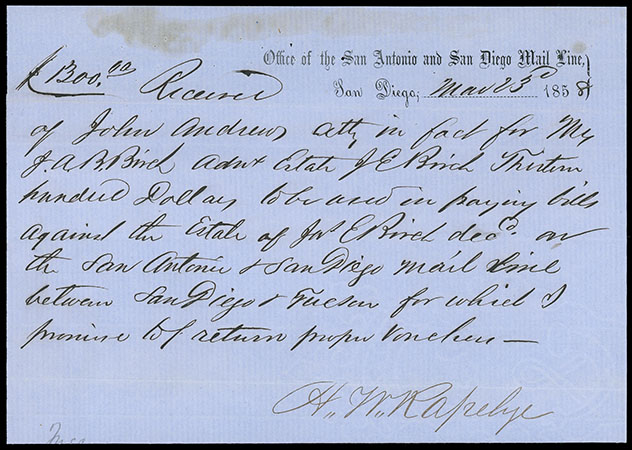 (Jackass Mail) "Office of the San Antonio and San Diego Mail Line, San Diego, Mar 23rd 1858", datelined folded letter settling of moneys due as the result of the death of James E. Birch and the closing down of his stage line between San Diego and Tucson on the "Jackass Mail" route; some light staining at top, otherwise Very Fine and excellent collateral item.
Estimate    $400 - 600.

On July 9, 1857, just 17 days after Birch concluded his contract, the first mail left San Diego. Birch died at sea while the first mail was still en-route. His mail contract was transferred to Giddings and Doyle. The service to Fort Yuma was taken over by the Butterfield Overland Mail Co. on September 20, 1858.